Beading A Bond Of Love

he love story of Arkansas artists Tom and Sage Holland is as enchanting and colorful as the glass beads and other pieces they create in their Stone County studio.

To begin with, they were both born in the same county in Missouri—except five years apart. Her bio on the artists’ website, beauxbead.com, says that she was born on Independence Day, in Independence, Missouri. However, she grew up in southern California where she says she “learned a love for beads and beadwork, along with getting a little too much sun.” She eventually moved to Bellingham, Washington where she opened her first studio.

Tom’s fascination with beadwork can be traced to his days in Missouri as a Boy Scout. In his teens he developed an interest in Native American culture. His website bio says that thanks to “an especially artful Scout leader,” he was able to attend Pow Wows around the Southwest and plains states. Through these experiences he “became enamored with the beaded regalia and European trade beads worn in their costuming.”

In a recent conversation with the couple, I learned Tom was the first to migrate to Arkansas.

“I had a friend from college—he was a Vietnam vet. He moved down here during the “back to the land movement” during the late 70s,” Tom said. “And I came down with my teepee and my truck in 1980 and lived up on a ledge on the acres on a little flat spot up on a hill up from him. I fell in love with Stone County.” Tom said he finds the stone and ledge rock of the Boston Mountains in north central Arkansas “particularly beautiful. I stayed here and I was attracted to the crafts people, all the talented people here.”

At one time Tom worked part-time at the then-fledgling Stone County Ironworks in Mountain View. He also made a living as a blacksmith at renaissance fairs and a potter at the Ozark Folk Center. “I did well with ceramics and stone masonry,” he said. 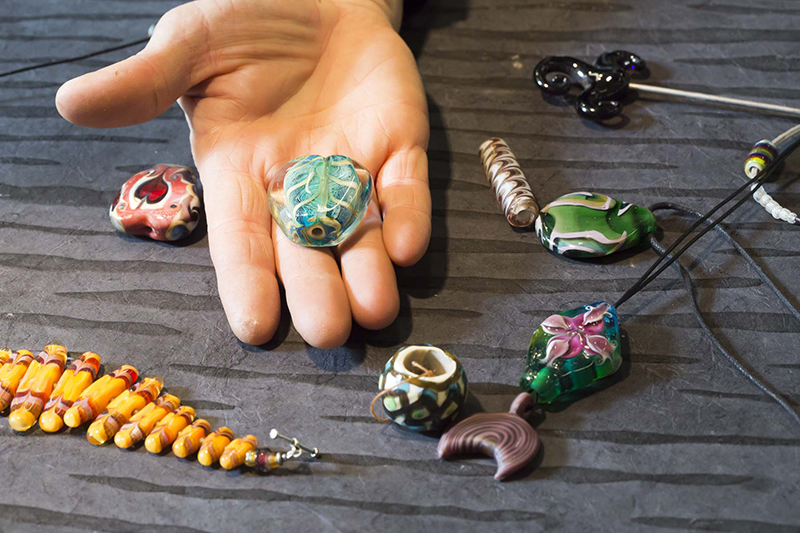 She said that her bond with Tom developed over their common love of beads. And although they share a birthplace, Sage said, “We never met until much later in life, and then we would just keep bumping into each other at different events in different parts of the country.” Those serendipitous meetings occurred at bead fairs and exhibits across the country including in Washington, D.C., Prescott, Ariz., and Santa Fe.

It was their meeting in the nation’s capital that changed the course of their lives.

“Sage and I got together at the first Exhibit of Contemporary Glass Bead Makers,” according to Tom. “I drove down in my little car and she flew down. We got together and she decided to throw away her plane ticket and hop in the car and see Arkansas with me,” he said.

Sage was living in Seattle at that time. She said, “I decided to just hop into his car and drive to Arkansas—a place I never dreamed I’d live.” 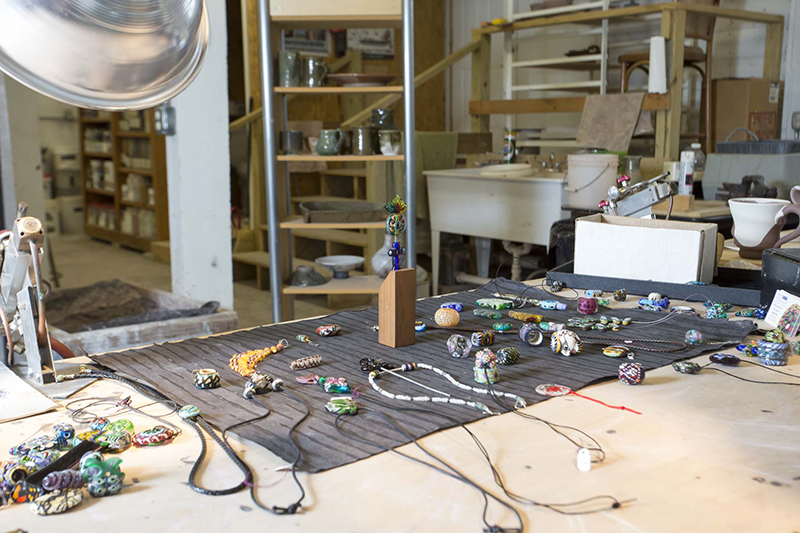 The Hollands are leading the movement to create beads and sculpture using techniques from ancient times when beads were as valuable as money.

nd so, à la Jack Kerouac in On the Road—with nothing behind them, everything ahead of them, as is ever so on the road—the couple crossed the Arkansas-Oklahoma border in July of 1993 at six o’clock in the morning. 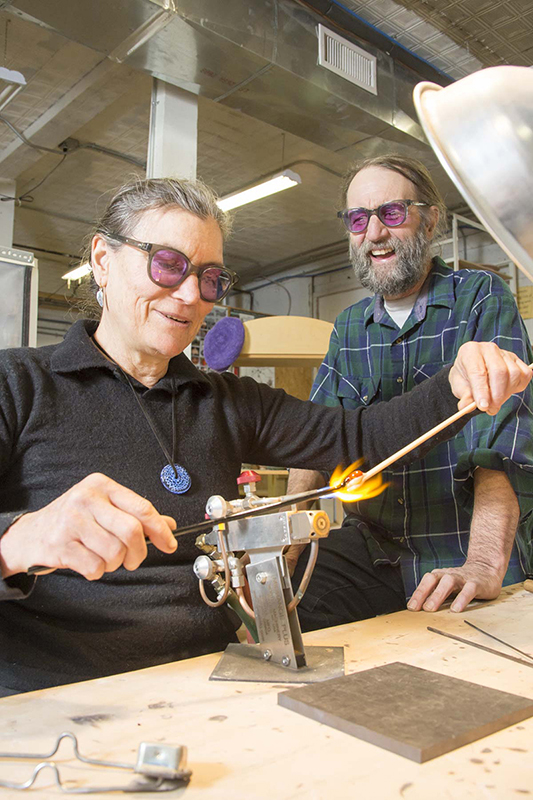 The Hollands’ devotion surpasses their mutual love of art. According to Tom, Sage is ‘an adventurous woman, and I find that very attractive.”

“We went to a rest stop, watched the sun come up and it was 92 degrees,” Tom remembered. He joked that he gave Sage an “honest introduction to Arkansas.” He said her acquaintance

with Arkansas commenced with “a raging case of poison ivy.” The couple then drank water from a spring near Tom’s house, resulting in an upset stomach for Sage. But, in the battle between adversity and commitment, Sage was victorious, and she stayed despite these challenges. “She’s an adventurous woman,” Tom said, “and I find that very attractive.”

According to Tom, when he and Sage began making glass beads they were two of only about 10 people in the United States making a living at this art form. Now, many years later, Sage said that beadmaking has become much more competitive. The Hollands believe that their dedication to upholding the ancient beadmaking traditions separates their work from others.

Sage said the two have been researching ancient glass “all over the continent and in other countries as well.” She and Tom are combining their “drive to stay in the movement,” she said. “We try to bring the history and all the techniques from the ancient times back into the modern era so no one forgets the great work of ancient Egypt and the Middle East during a time when beads were as valuable as money.” Tom and Sage create their beads, sculptures, household goods—such as drawer pulls, and jewelry through an artisan technique called lampworking.

“We do lampworking, which is a way that you make one bead at a time. And this type of beadmaking is far older than even blown glass,” she said. “We are interested in gleaning technique out of the ancient work that we can incorporate into our work,” Tom added. He said that with lamp work, some beads can be made in as few as 30 seconds per bead. Conversely, “I’m working on some pieces now that are taking me over five hours just for one bead,” he said.

Blown glass, which can be done more rapidly, has created an opportunity for mass production. This means that independent artisans are sometimes competing in the marketplace with overseas producers, such as in China.

Sage said that making only simple beads puts the artisan in competition with mass produced beads, because they are simply made. She said that “putting a lot of design and a lot of personal expression into one particular bead that you can work on for hours and hours” was not being done anymore. “We helped to recreate all of these ways of expressing that unique one-bead sphere using ancient techniques,” Sage said.

Tom and Sage sell their pieces to a diverse market through a number of means. Their website features a range of beads, jewelry and more in a range of prices. The Hollands share their website with their son, Beau and his partner, Vanessa, who are also accomplished bead makers. The artists sell to designers, who use their beads in their work, but they also sell to individuals interested in a single piece.

The pair travel much more than in the past because of the ever-changing market. They still teach classes when they can. “We teach at the Arkansas Craft School, which is next to the

Arkansas Craft Gallery.” Located in Mountain View, Sage said “the school is the only facility in the state with eight really nice torches for glass art.”

They both are sculptors, and lampworking allows them to make vessels or sculptures—which essentially is what beads are—just on a much smaller scale. And although he is skilled at 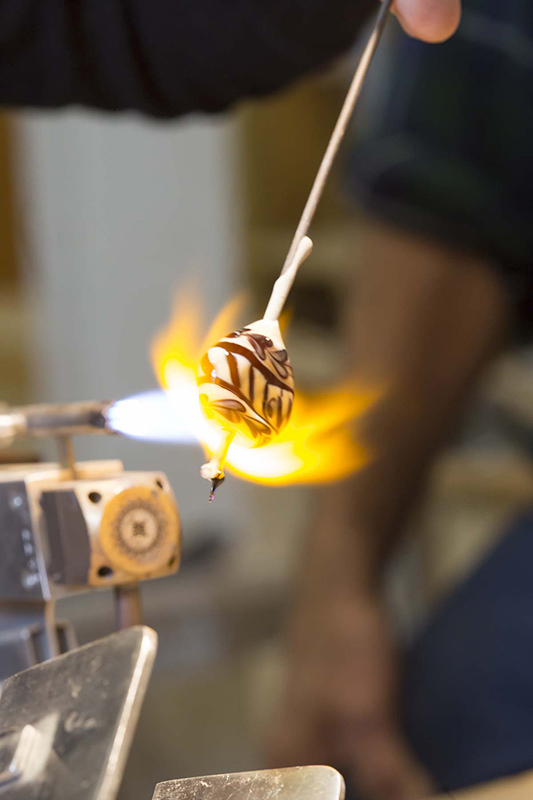 Fire seals the beauty of a custom bead. The Hollands also teach at the Arkansas Craft School in Mountain View.

many techniques, Tom finds that what he enjoys most is beadmaking. “There’s enough of a challenge in just the simple beads. It’s the oldest art form that humans have made,” he said.

The Hollands are also committed to preservation and sustainability. “Both of us are civically involved,” Tom said. “This will be my 29th year for serving on the recycling board and being a volunteer for recycling in the county. Sage is heavily involved with mountain biking and road biking and the bike system throughout Stone County” as well as networking throughout the state.

“We both have a conviction for community service. We feel that’s a part of our art. With that in mind, the bead packs a lot of art into a small, little space,” Tom said. “We need to have more with less, and that’s what the bead says—there’s more with less.”

“Bead work takes less fuel. We try to use as little as possible,” Sage said. The Hollands make every effort to practice conservation, and have incorporated this ideal into the new house they are building in their beloved Boston Mountains. “It’s so difficult to not be a hypocrite,” Tom said. “We do drive automobiles and we use lead acid batteries.” But they also heat their home with wood and recently updated their solar panels and plan to nearly double the system in their new home over the one they currently use. “Our goal is try to use our generator less and less,” Tom said.

We live on 44 acres that border a wildlife refuge, and then right next to that wildlife refuge is another wildlife refuge,” Sage said. “There’s a sense of being in the most pristine part of Arkansas, so we feel really lucky. We’re right on the creek. We hope that when we get our house done to have people here not only to learn beadmaking, but to learn how to live off the grid or live on solar,” she said.