The recent cancellation of Riverfest may have you thinking that there won’t be a great music fest this May, but you would be wrong.
This May, one of the biggest events of the summer is happening right across the Mississippi River in Memphis: Memphis in May’s Beale Street Music Festival.
Over 60 artists will be converging on Tom Lee Park in Memphis from May 3-5 for the 2019 Beale Street Music Festival. From major stars like the Dave Matthews Band and Cardi B to up-and-comers like blues virtuoso Christone “Kingfish” Ingram, there’s a stacked lineup of musicians ranging in genre from rap to folk. 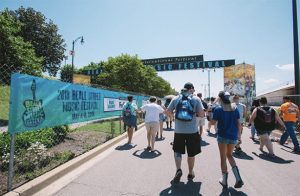 Since 1977, the Beale Street Music Festival has been bringing world-class musicians to Memphis for a weekend of great entertainment. Memphis in May began producing the music festival in 1978, adding additional events to the weekend, including the World Championship Barbecue Cooking Contest.
After 40 years, the festival is continuing to grow. In 2018, a study determined the festival has a $137 million impact on the City of Memphis. But that’s not the only way it’s growing – it’s the talent the festival is drawing.

On Friday, May 3, the festival is kicking off with headliners Shinedown, Khalid, and the Dave Matthews Band. All the 2000s kids will be heading to the Good Charlotte performance. There will also be performances by Chvrches, Lil Dicky, Dirty Heads, In This Moment, Saving Abel, and more.
OneRepublic, G-Eazy, and Charlie Wilson will be the headliners for Saturday. In addition, Big Boi, Simple Plan, Christone “Kingfish” Ingram, Everlast, Trippie Redd and more will be performing.
The last day of the festival will feature The Killers, Cardi B, and Gary Clark Jr. as headliners. Don’t miss Flogging Molly, Lord Huron or Madison Beer when they perform.
Multiple ticket options are available for sale. You can purchase three-day passes, single-day tickets or a VIP Experience pass. Get your tickets here.

Here are the ticket prices:
Three-day passes – PLEASE NOTE: The only difference between the tiers is the price. All tiers include the same admission privileges to the park.
·      Tier 1: SOLD OUT
·      Tier 2: SOLD OUT
·      Tier 3: $135 (pricing expires on April 19 at midnight)
·      Tier 4: $180
Single-day tickets
·      $55 (pricing expires on April 19 at midnight)
·      $60 (pricing expires May 2 at midnight)
·      $65
VIP Experience
·      $649
·      Parking included: $749
It may not be in Arkansas, but it’s just next door. The Beale Street Music Festival is one of the best festivals in the country. So head across the bridge and soak in the fun – rain or shine – this May.
READ MORE: Jazz in the Park Returns to Little Rock
Images courtesy of Memphis in May International Festival
By Tyler HaleApril 2, 2019
Share this post
Share on FacebookShare on Facebook TweetShare on Twitter Pin itShare on Pinterest Share on LinkedInShare on LinkedIn Share on WhatsAppShare on WhatsApp