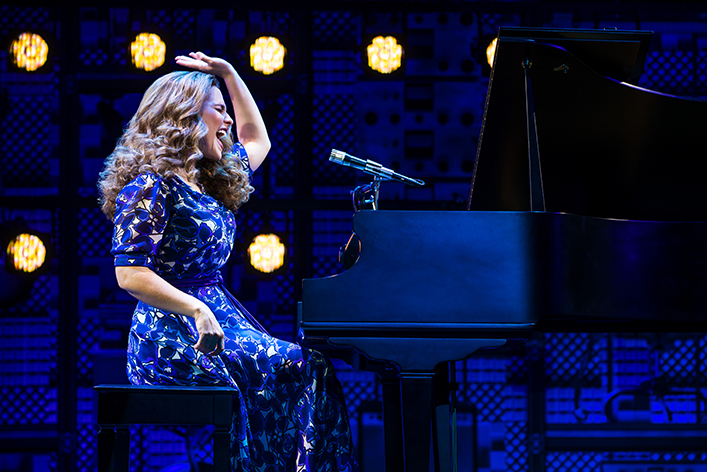 BEAUTIFUL – The Carole King Musical tells the inspiring true story of King’s remarkable rise to stardom, from being part of a hit songwriting team with her husband Gerry Goffin, to her relationship with fellow writers and best friends Cynthia Weil and Barry Mann, to becoming one of the most successful solo acts in popular music history. Along the way, she made more than beautiful music, she wrote the soundtrack to a generation.
AY recently caught up with star of the show, Sarah Bockel, who plays the role of King, for an interview.

“I have always wanted to be an actor. I might have been in denial about it for as long as I could be. I started in Chicago – I grew up in Chicago and went to high school in the city. That’s where I got my first taste of the theatre… I went to college and moved back to Chicago after I graduated. I started getting into the community theatre as much as I could, eventually got an agent, who got me an audition for Beautiful.”

“No, I did a lot of shows in Chicago and regionally. But it was my first New York-booked gig, union gig.”

“I was, and I am now much more than I was. I had Tapestryon vinyl. I was definitely a bigger Joni Mitchell fan, but I identified more with Carole King. I’ve been told I look like her a lot, which doesn’t hurt. I just wasn’t aware, before, how big her span of work was.”

“It’s a tall order, a lot of pressure. I try to think of it more as a character, not this big icon. So many people’s lives have been touched by her. I do feel like I identify with her and her personality. I feel like I’m allowed to bring a lot of myself to the role. It’s easy to fall in love with her as a person, but also her as a character. She’s so likable.”

“When she’s young – it starts when she’s 16 and goes until she’s 29. She, or this character of her, is like a big nerd. She’s able to laugh at herself. She’s a dreamer; she gets lost. Things bubble up out of her mouth, and she immediately laughs at herself or has a reaction. I’m like that, as well. I like playing someone who thinks of herself as a big goofball. It’s the funniness, the natural goofiness.”

“I have a lot of favorite parts. I love singing “It’s Too Late.” It’s our first song from Tapestrythat we play. It gets a big reaction from the audience, and it’s my favorite song of hers – has been since long before Beautiful. It’s fun to play the intro of that song, but it’s fun to play the intro of every song. You can see people shift in their seats. You can hear them clapping, sometimes some vocal reactions. I guess my favorite part is the audience reactions.”

“A lot of YouTube videos. I read her book, Natural Woman. Reading a lot about her, what she says about her, how she is when she performs live, interviews with her. She’s funny. She’s goofy and down to earth. She laughs at herself and enjoys performing. You see that joy when she’s performing and playing piano. But she’s also shy. It’s about the music for her. It’s an honor, but it’s also just fun.”

“It’s a breakup of a marriage every night. Mentally and emotionally, less physically, it’s exhausting. My stage partner and I are friends. Sometimes you’re tired or your emotional, as people are every day, but it’s your job to go there. Half of your audience has probably gone through a divorce, and all of us have had a heartbreak. Sometimes it’s hard, and you don’t want to go there, but you do. It’s your job to feel those things.
“It’s also hard trying to pick and choose where I want to emulate her sound and where I want to sound more like myself. She’s not a trained singer; though, she’s a classically trained pianist. Her voice is iconic for being her own – warm, scratchy wail that people love. When people come to the show, they want to hear that. But I have to do it eight times a week, so I have lots of options. I want to give the audience everything they paid for, that they should have… Everything I do during the day is in preparation.”

“Yeah, and it depends on what type of space we’re in. Sometimes the audience is really close and we can hear all of their reactions. Those are the best. The show feels new every night, based on what they’re giving back to us. Sometimes, they’re giving a lot but they’re far away or the acoustics are different. We’ll have to maintain a different rhythm because the reactions are coming back to us a little delayed.
“They’re reaction, the people who say they enjoy the show. Kids enjoying the show is really cool, creating a new generation of Carole King fans is just really cool.”

“They’re probably going to know two-thirds of the songs, even though they may think that they don’t know who she is.”
BEAUTIFUL – The Carole King Musical will run from May 29 through June 3 at the Robinson Performance Hall in downtown Little Rock. Visit celebrityattractions.com for tickets and more information.