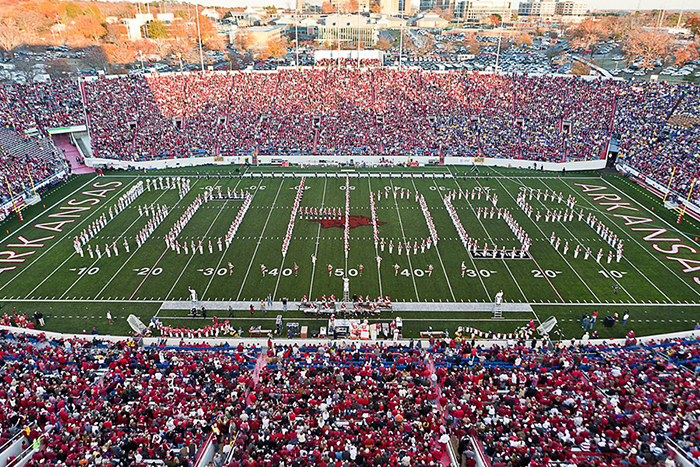 Razorback fans will have something else to look forward to this season – being able to buy alcohol at Donald W. Reynolds Razorback Stadium.

Starting in the 2019 football season, fans will be able to buy beer and wine in the stadium’s public areas. Previously, alcohol was only available in suites and private club areas; it has been available in those areas since 2014.

Earlier this year, the Southeastern Conference revised a policy that restricted alcohol sales in the public areas of athletics venues. Now, each university has the discretion to sell alcoholic beverages at its athletic venues. This policy revision led the University of Arkansas to authorize alcoholic beverage sales to fans aged 21 years or older.

“By expanding our established alcoholic beverages program to include the sale of beer and wine in public areas of Donald W. Reynolds Razorback Stadium, we are building on an already successful model while furthering the fan experience in a responsible way,” Vice Chancellor and Director of Athletics Hunter Yurachek said in a statement. “Working in coordination with campus officials and within established guidelines adopted by the SEC, we will now be able to offer this gameday amenity as an option to fans while working to further educate University of Arkansas students and the general public about safe and responsible consumption.

Alcoholic beverages will only be sold at stationary locations and not in seating areas. There will be a limit of two servings per individual for each transaction, and alcohol sales will cease at the end of third quarter of each game.

Identification checks will be required at each sale.

In addition, alcohol will not be permitted in the University of Arkansas student seating section.