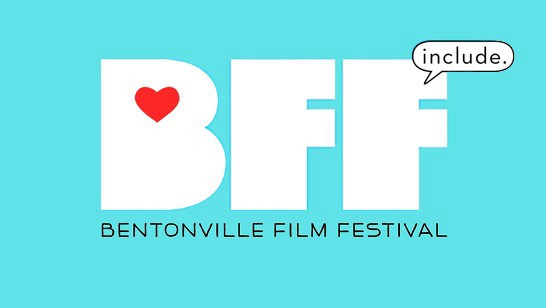 The time is nearing, for the third annual Bentonville Film Festival, to take place May 2-7 in Bentonville, Arkansas! The festival will host 38 feature-length documentary and narrative films, in competition. Co-founded in 2015 by Academy Award Winner® Geena Davis, founder and chair of the Geena Davis Institute on Gender in Media and Trevor Drinkwater, President and CEO of ARC Entertainment, the Bentonville Film Festival is a commercially focused, research based platform with a mission to champion women and diverse voices in media and proactively supports content creation that inspires young minds to do great things.

BFF is the only film competition in the world to award guaranteed theatrical, international, digital, retail home entertainment distribution for its winners in partnership with AMC, Walmart and American International Cinema. The festival takes place during the first week of May in Bentonville, Ark.

In addition, the Festival is excited to expand this year’s competition to include 18 short films and four pieces of episodic and web series content. Festival co-founder and chair Geena Davis says, “I’m so excited to be heading into our third annual BFF. The Festival has become an important catalyst for change and we look forward to celebrating the accomplishments of the past year and setting the stage for years to come.”

Geena Davis is one of Hollywood’s most respected actors, appearing in several roles that became cultural landmarks. In 1989, Davis received the Academy Award for Best Supporting Actress in “The Accidental Tourist” and earned the 2006 Golden Globe Award for Best Performance by an Actress in a Television Series – Drama, breaking ground in her portrayal of the first female President of the United States in ABC’s hit show “Commander in Chief.”

BFF is the only film competition in the world to award guaranteed theatrical, television, digital and retail home entertainment distribution presented by AMC Theatres, Lifetime and Starz for its winners. BFF is delighted to bring back the Samsung Create Short Film Competition and the Lifetime Screenplay Competition for 2017. “BFF is the once-a-year opportunity for studios, broadcasters, digital content creators, filmmakers and advertisers to convene and collaborate on improving how media reflects women and diverse voices,” says co-founder Trevor Drinkwater. “We are looking forward to another year of great progress.”

BFF is also proud to showcase several mission-oriented studio films, including The Weinstein Company’s “Three Generations,” starring Elle Fanning and Naomi Watts, and Marvel’s highly anticipated “Guardians of the Galaxy 2.” “More than ever, moviegoers are seeking out stories that resonate with their lives,” says Nikkole Denson-Randolph, Vice President of Alternative and Special Content for AMC Theatres. “As a partner from the beginning of the Bentonville Film Festival, AMC is excited to continue to encourage diverse storytelling and to provide a platform for up-and-coming filmmakers.”

This year, BFF will feature a STEAM Lounge, which will showcase hands-on methods for using media to inspire young minds to pursue careers in science, technology, engineering, arts and math. The festival will also expand the popular INsideOUT Lounge, where BFF sponsors showcase and share products with a focus on mind, body and spirit. Saturday, May 6, the kids will enjoy PeekABoo Magazine’s KidsFest at BFF, which will be loaded with events and activities for kids of all ages. Coca-Cola marketing director Amanda Whittaker shares, “We are proud of what BFF has become and are honored to remain as the presenting sponsor of this important initiative. As our CEO likes to say, ‘We want our employee base to be as diverse as the customers we serve.’”

Multi-event passes are a great way to experience the Festival and are available to purchase online at www.bentonvillefilmfestival.com

Stay tunes for highlights at aymag.com.