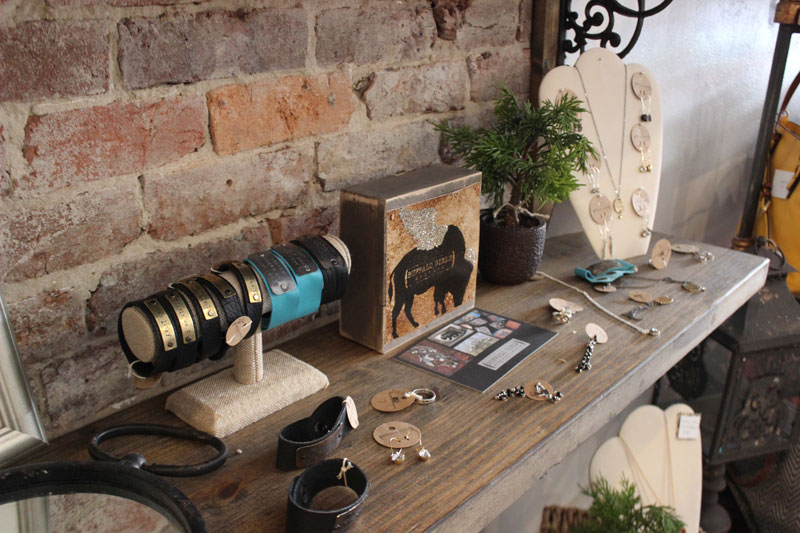 On a recent visit to Bentonville and Rogers in Northwest Arkansas, I noticed there are little pieces of art everywhere. Art installations can be found wherever you look, from the metalwork springing up in the form of flowers and birds along the walkways in downtown Rogers, to the stained-glass windows in Bentonville’s new restaurant, The Preacher’s Son.

Artistic expression is also evident from the turning of pottery and the intricacy of beadwork found in the Museum of Native American History, to the beauty of a freshly made pie from Fork & Crust, or an expertly crafted drink, whether it’s a cocktail at Scotch & Soda or a coffee drink from Onyx Coffee Lab.

Yes, there is an obvious location to find art in Bentonville, but even without walking into a single gallery at Crystal Bridges Museum of American Art, you can find art everywhere if you are looking.

Above photo : Remedy Road carries socially conscious clothing, jewelry and accessories, as well as items for your home .

When setting up the Bentonville café, Onyx Coffee Lab owners Jon and Andrea Allen had performance art on their mind. The coffee bar is situated in the middle of the café like a stage, and talented baristas are what’s on display, crafting exceptional coffee beverages for customers.

What’s in the cup is, without a doubt, the result of great attention to quality. Starting with the best coffee beans sourced with care, and then perfecting the roast, Onyx is intent on bringing the best specialty coffee to Northwest Arkansas and beyond.

Those baristas behind the counter are part of that equation, too. They work hard and train hard—each barista goes through nearly six months of training—so you know they are the best of the best, not just button pushers.

Although the Bentonville café, located at 100 N.W. Second St. #106, opened only a year and a half ago, Onyx already has its sights on another new location. The “ode to coffee,” as Allen calls it, will take up residence in the Dollar Save Building in downtown Rogers. The 20,000-square-foot building will serve as their new headquarters and will house the roasterie, a coffee school, and a café with a full view of the roasting process. 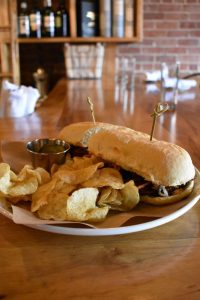 Pork Belly Banh-mi sandwish with chips and a side of the house pickles form the luch menu at Scotch & Soda.

Walking into a bar that is dedicated to whiskey pours may seem like an intimidating venture to the novice. I know it was for me. However, general manager Sam Bilyeu and his staff put me at ease instantly. They are so welcoming and love to educate without the slightest hint of condescension.

After getting their start in the college town of Springfield, Missouri, Scotch & Soda owners Josh Widner and Andrew Heilman knew that their Bentonville location would have to be a slightly different take on their original concept. While they kept much of their aesthetic – the red drapes, the library shelves stocked with bottles, complete with a rolling ladder, and the best of their custom cocktails – there are many things that set the Bentonville location apart.

The most striking difference is that the Bentonville bar has a full kitchen, serving dinner since their opening in October 2016, and more recently, lunch as well. I decided to try the Pork Belly Banh-mi sandwich with chips and a side of the house pickles from the lunch menu. Taken from someone who doesn’t normally enjoy pork, this sandwich is one I will definitely be revisiting. So much flavor in the sticky and slightly sweet, slightly spicy pork belly, and the cucumber and pickled veggies added just the right crunch and balance to the banh-mi.

Stop in for lunch, dinner or drinks at 121 W. Central Ave.

Located across the street from Scotch & Soda in downtown Bentonville at 114 W. Central Ave., Remedy Road is a store with a purpose. Lisa and Brad Vinson opened their socially-conscious shop in Bentonville last year with the intention to not only sell beautiful handcrafted items, but to uplift the people behind those items.

Whatever you carry out in one of their gold shopping bags, you know that your purchase gives back in some way, whether that is supporting the individual artisans or helping to lift someone out of poverty. A handmade bag by JOYN supports artisans in India, giving them both work and hope where there was none before. A wallet by Cleobella is both beautiful and practical, and creates sustainable employment in Bali.

Remedy Road carries socially conscious clothing, jewelry and accessories, as well as items for your home, such as pillows handcrafted by artisans in the Atlas Mountains of Morocco.

In addition to supporting brands that are committed to providing jobs to artisans in the poorest countries around the world, Remedy Road donates 10% of profits to local nonprofits, and the nonprofit organizations that partner with, or support, the artisans who create the items sold in their store.

Every shelf, nook and cranny of the historic building is filled with great gifts, boutique clothing, baby items, and home décor including custom bedding and furniture.

In addition to the curated items sold within the store, owner and head designer Tracy Alexander says they also offer full design services. “If you’re building a new house we can help you from the ground up with floor planning, choices of finishes, light fixtures, and more. We paint furniture so if you want to repurpose what you already have we can repurpose it for you.”

They can help you choose custom furniture made from new or reclaimed wood, custom drapes, custom pillows, and custom bedding. If you prefer to do it yourself, you can purchase paint and even learn how to repurpose your own furniture at one of their paint classes. You can find them at 124 W. Walnut Street. 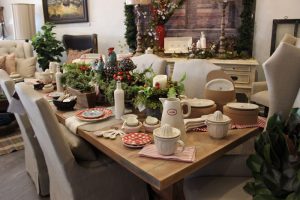 Many of the exhibits and artifacts have an audio component so that you can learn more about them. There are also QR codes throughout the museum that you can scan with a smartphone to watch videos – giving you a window into what the life for Native Americans was like in that period.

On the second Saturday of each month the museum hosts a story time geared toward ages 3-8.

They will also be hosting the first Native American Cultural Symposium in June. The symposium will include storytelling, writers, performers and an outdoor film series that will take place June 2-4, with additional films shown on June 10 and 17. Three of the presenters at the symposium are direct descendents of 19th century legends – Bobby Bridger, descendant of Jim Bridger; Joseph Marshall III, descendent of Crazy Horse; and Gayle Ross, descendent of Chief John Ross. 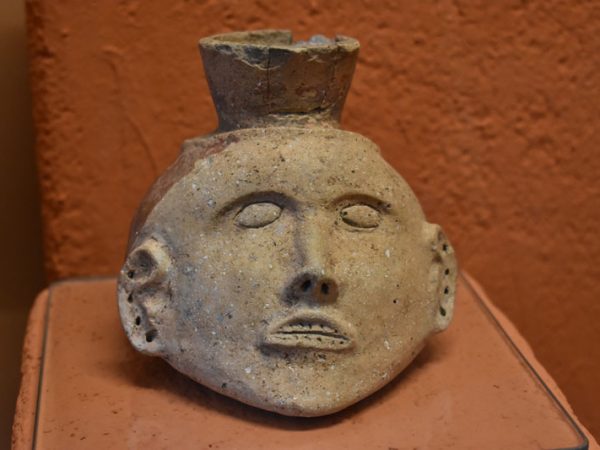 A self-guided tour walks you through a total of five periods of Native American history.

A slice of pie in a shake with ice cream, chunks of crust, and crumb, and fruit from Fork & Crust Pie Company.

People love pie. And pie shakes – that’s a slice of pie in a shake with ice cream, chunks of crust, and crumb, and fruit, oh my! In the words of Fork & Crust owner Lori Rae, the pie shakes have “taken over,” though they just recently started offering them.

I opted for a slice of the strawberry rhubarb pie, a house favorite featuring a deliciously tart pie balanced with a delectable, sweet crumb on top.

In addition to pie and pie shakes, they also serve quiche, scones, cinnamon rolls and cookies.

With a location along the Razorback Greenway in Rogers, the shop is a popular stopover for bikers and walkers talking advantage of the trail system. If you’re coming by car, however, you can find them at 5208 W. Village Parkway #11.

It’s fitting that The Preacher’s Son is located right along the downtown Bentonville arts district. Walking into the beautifully renovated gothic-revival style church-turned-restaurant, you cannot miss the artistry in the stained glass windows and careful attention to detail in the design.

That attention to detail, and yes, artistry, is extended to each dish that comes out of executive chef and actual preacher’s son, Matt Cooper’s

The beautifully renovated gothic-revival style church-turned-restaurant of The Preacher’s Son.

The service was exceptional; our server, Adam, was knowledgeable and accommodating.

My dining companion was glad to hear that there were many items on the menu that were safe for someone with food allergies. She ordered the Schnitzel Fried Chicken, which was plate-sized and came with two delicious dipping sauces.

I had the Heirloom Carrot Gnocchi, a favorite of Coopers, served with a fromage blanc, brown butter, percorino cheese and local honeycomb.

All the food, from the starters – Burrata with shaved beets salad, Mushrooms & Goat Cheese and the Elderberry Cured Salmon – to the entrees, was exceptional.

Some seasonal menu changes are in store, however, according to Cooper, “You won’t see many drastic changes. The ingredients in some of our items may change a little depending on the season, but we are focused on being that welcoming and inviting place that people know, and where they can come in and get what they want.”

The Preacher’s Son serves dinner at 201 N.W. A St., and reservations are recommended.

Be sure to check out the speakeasy-style bar located beneath the restaurant, just don’t be fooled by the door obscurely labeled “Coat Closet.”