Wouldn’t it be a dream to make a life-changing amount of money with a favorite hobby? Steve Scherrey of Conway, Ark., did just that.

[dropcap]He[/dropcap] is the first person to ever win the Annual Arkansas Big Bass Bonanza Fishing Tournament twice. In 2000 he won $100,000 and last year he won $50,000. This tournament is the state’s largest amateur big bass tournament — it spans 300 miles of the Arkansas River.

“It was kind of surreal,” he said about winning the first time. “You fish the tournament because it’s competitive and fun. You might win money or a little prize, you’re not really thinking about winning the whole thing.”

News outlets From Oklahoma to Mississippi reported his win.

“Neat part about it was how many people actually heard that I’d won. That lasts a long time and you get to have a lot of conversations with a lot of people,” he said, with a smile.

Scherrey works in the packaging industry, owns Conway Box and represents Alpha Package out of Greenwood, Arkansas. “I’m a great salesman,” he said, laughing. “I can sell empty cardboard boxes.”

He’s also a great fisherman. Scherrey began fishing as a young boy. He grew up in Fort Smith, Ark., and said he spent a lot of time at Frog Bayou running trotlines with his buddies. “Then when I got older, I moved to Conway, and there are 15 different landings within an hour’s drive.”

He began fishing competitively in 1973 in the Fort Smith Bass Club. Then in 1977, he fished on the Conway Bass Club team bass circuit. He said he usually fishes for brim, catfish, crappie and bass.

His large-cash winning catches in Post Lake near Tichnor were a 6.75 pound bass caught with a Scum Frog lure in 2000, and a 6.98 pound bass caught on a chartreuse Booyah buzzbait lure. He said they were both caught in the Pendleton pool. 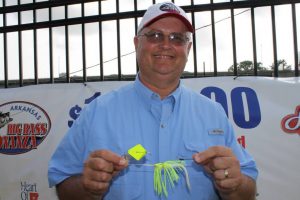 “Steve is the first person to ever win twice. In 1989, Steve Hardin of Dexter, Mo., won with a fish that weighted in at 8.95 pounds. So far, that is the largest in the history of the tournament,” Theil said.

Scherrey said he has fished the tournament every year since its beginning. For the past three years Jim Langley has been his fishing partner, and he split the winnings with Langley. Scherrey plans to participate again in the tournament this year.

“Good thing about the Big Bass Tournament is that you don’t have to be a professional fisherman to win. Just a regular sportsman can win this thing. I usually eat what I catch, and children enjoy it. [It’s] nice to be able to win a little money to support my hobby.”

The three-day tournament, originally scheduled for June 26 through 28, has been rescheduled for July 31 through Aug. 2, due to heavy rains that have made conditions on the Arkansas River potentially hazardous for small watercraft.

Each day, fishing starts each day at 6 a.m., with the first weigh-in at 8 a.m. and subsequent weigh-ins at the top of each hour until 1 p.m. In addition, if the hourly winners purchase and are wearing a Big Bass Bonanaza t-shirt and cap, they will receive an extra $100 in bonus money.

The entry is $80 per person per day, and the winners will be announced at 4 p.m., Aug. 2 at the awards event at the Riverfront RV Park pavilion in North Little Rock, Arkansas.

For more information on tournament rules or to register for the Big Bass Bonanza, log on to arkansasbigbass.com.