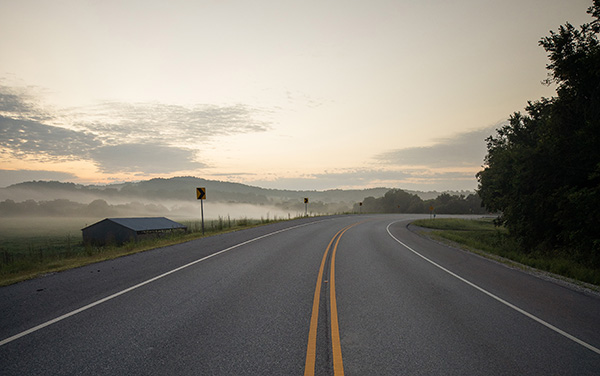 Arkansas is blessed with numerous scenic motorcycling routes, catering to every taste and riding ability. For an expert’s view, we sat down with Daniel Neathery, service manager with Rock City Harley-Davidson in Little Rock, to hear about some of his favorite rides.

Founded in 1890, Oark General Store is the oldest continually operating store in Arkansas and its reputation among bikers is as long as its tenure. Riders stop for great burgers, ice cream, pies and a selfie at one of the most iconic spots in the Natural State.

“It’s smooth roads, very little traffic. It’s winding; it’s got some switchback turns,” Neathery says. “As far as technicality of the road, it’s an easy road to ride, but it still gives you twists and turns. I wouldn’t put a novice rider on it at a reasonable rate of speed, but if you’re being responsible about it, most anybody can ride it. Awesome scenery.”

Jasper may be a speck on the map (fewer than 500 people at last count), but it’s a world-famous speck on the map thanks to its proximity to the Buffalo River, fantastic hiking and stunning natural beauty. AR 74 runs right to this little hamlet’s doorstep in the beautiful Ozark Mountains. Be warned: This is a technically-challenging route with steep grades and 15- and 20-mile per hour curves. The payoff, however, is worth it.

“The thing about riding a motorcycle, it’s about food,” Neathery says. “When you get into Jasper you’ve got a little restaurant, the Ozark Cafe. They’ve got good desserts, too. When you get done eating there, go to the Low Gap Cafe. A lot of folks don’t know there is a legit 4- or 5-star chef that works in this hole-in-the-wall restaurant. It doesn’t look like much at all, but he is turning out some amazing food.”

HOW TO GET THERE:  Take AR 74 north at Russellville or south at Harrison.

Sometimes you just want to get out, point the bike in a given direction and just wander. When Neathery gets that feeling, he heads for Lake Greeson and lets the wind take him where he wants to go.

“I don’t have one particular route,” he says. “The area still gives you the hills; it’s not quite as drastic as the Ozarks up in Northwest Arkansas, but it still gives you some of it. Lake Greeson is not as crowded as Lake Ouachita, Hamilton or DeGray, and has several parks around it where you can pull in, see the water and dip your feet in there. Greeson gets you away from the crowd and allows you to see one of the prettier lakes in Arkansas, in my opinion.”

HOW TO GET THERE:  A good route to Lake Greeson is AR 70 south from Hot Springs which skirts the Ouachita National Forest along the way.

Slicing through the westernmost edge of the Ouachita National Forest, AR 88 doesn’t last very long (at the state line it becomes Oklahoma Highway 1/Talimena Scenic Drive), but it packs in a lot over a short distance. The ride runs through Queen Wilhelmina State Park and just south of Rich Mountain. Neathery gives the route high marks for a fairly straight, casual ride that allows one to take in the mountain vistas.

“When you cross the state line, there’s this little pull-up,” he adds. “When you walk down, you can see there’s a geographical marker in the ground, and it’s got a little spike that says ‘This is the state line.’ It’s something cool; you can put one foot in Arkansas, one foot in Oklahoma.”

HOW TO GET THERE:  Pick up AR 88/Talimena Scenic Dr at Mena, heading north.

No list of Arkansas motorcycling routes would be complete without a chunk of AR 23, known as The Pig Trail. Some say the name came from it once being the main route to Fayetteville for Razorback football games; others say it’s due to the route’s resemblance to a twisty hog’s tail. What’s not in dispute is the fame of the ride, named by national media as one of the top rides in the nation, hands down.

But even among hardcore motorcycle enthusiasts, there are differing levels of enthusiasm for the famous stretch. Neathery is one of the ambivalent ones.

“Something to keep in mind is, it’s under construction; they have pea gravel and debris all in the road right now,” he says. “It’s not a very smooth road. The Pig Trail could be an awesome road if they’d make it smooth, which I assume that’s what they’re trying to do.

“In my honest opinion, there’s much better roads around than The Pig Trail. I think it just caught on ‘cause it’s got a cool name. Highway 103 and Highway 215 going to Oark, to me, are much better roads. They’re smoother, and they have probably just as many curves in them. But they don’t have anything catchy like ‘The Pig Trail’ does.”

HOW TO GET THERE: The Pig Trail itself is just 24 miles of AR 23 between Ozark to the south (accessible from Interstate 40) and a bend in the road to the north called Brashears. There, riders can continue on AR 23 all the way through to Eureka Springs and the Missouri border, or head west on AR 16 which drops you on Fayetteville’s back porch.

For more great rides all over Arkansas, visit www.arkansas.com, or pick up a motorcycling guide at any of the state’s visitor’s centers.