‘Baby, I’m Howlin’ for You’: The Black Keys Coming to Walmart AMP 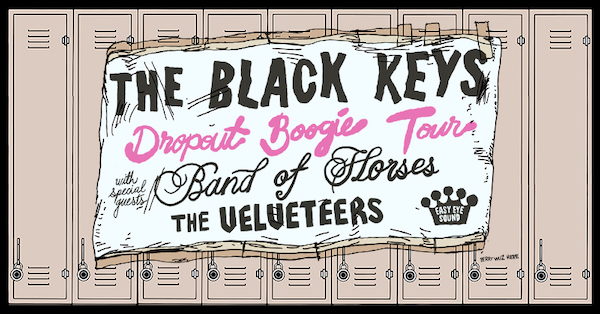 The Walmart AMP has announced that The Black Keys are bringing their Dropout Boogie Tour to Northwest Arkansas on Thursday, Oct. 13. This show will also feature Band of Horses and The Velveteers as part of the Cox Concert Series.

Most recently, The Black Keys released the Super Deluxe 10th anniversary edition of their seventh studio album El Camino in 2021. The Black Keys won three awards for El Camino at the 55th Grammys.

The Black Keys are composed of singer and guitarist Dan Auerbach and drummer Patrick Carney. Last year, the duo received its 14th Grammy nomination, this time for Best Contemporary Blues Album for Delta Kream, which was released in May 2021 by Nonesuch Records. This made the band’s fifth consecutive top 10 debut on the Billboard 200.

Formed in Akron, Ohio, in 2001, The Black Keys have been called “rock royalty” by the Associated Press and “one of the best rock ‘n’ roll bands on the planet” by Uncut. With nine previous studio albums, the band has sold out arena tours since its debut album The Big Come Up in 2002. The band has won a total of six Grammy Awards and a BRIT, and headlined festivals in North America, South America, Mexico, Australia and Europe.

Fast Track for early access and lawn chair rentals can be added to ticket orders for $10 each, these tickets will be delivered by mail. Gates for the show will open at 6 p.m. with music beginning at 7 p.m.

Concert attendees will receive tickets and add-ons within 30 days before the concert date by delivery method selected at time of purchase.

For more information about Walmart AMP or the Cox Concert Series, click here.