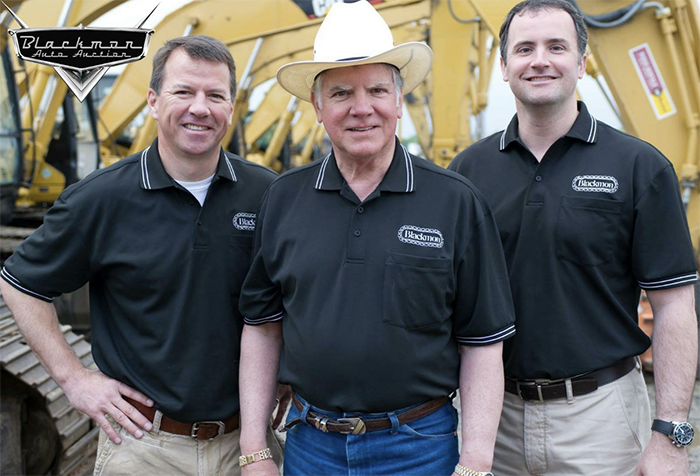 Blackmon Auctions, a third-generation, family-owned, auction company specializing in construction, trucking, industrial, and real estate sales is celebrating its 81st year in business.
“We are still owned by the original family, and we have been in business longer than any others in the industry,” says CEO Thomas Blackmon. “We are also rare that for the size we are, the auctioning is still done by the owner of the company. Many other auction companies our size are owned by a board of directors, and the auctioneer is hired for the day. But not us.”
Blackmon’s hands-on involvement means he plays a variety of roles when the gavel starts banging.
“Auctioning is more than just getting up and calling numbers out. The nature of the auction business puts me in people’s lives when they are going through a major transition,” he says. “I wear many different hats being an auctioneer. In the course of an auction, I will be a lawyer, an accountant, a therapist, a salesman, a carnival barker, a bouncer, a preacher, a banker, a debt collector, a mediator, and sometimes just a shoulder to cry on. The business is different every day, and that’s what I love about it.”
Blackmon’s grandfather, Eddie, started the company in 1938. He owned part interest in a cattle barn in Dewitt, Ark., and the auctioneer he had working for him got in trouble running a raffle scam and was run out of town. Eddie did the auction that night, and the rest is history. In 1965, Thomas’ father, Tom, took over the auction business, changed it from a seasonal to a full-time business, and focused on selling farm equipment. He added construction equipment auctions in 1972, expanded into the trucking, logging, railroad, and manufacturing equipment in the early 1980s, and from a regional farm auction company to an internationally respected auction company.
Thomas Blackmon took over the business in 2010 and added real estate auctions. Today, the business has sale yards in Little Rock and Muskogee, Okla., sells real estate in five surrounding states, conducts about 70 auctions a year, is licensed in 24 states, and is one of the oldest auction companies in the nation.
One of the secrets to Blackmon Auctions’ success has been the loyalty of its full-time employees, who average more than 15 years of service to the company. 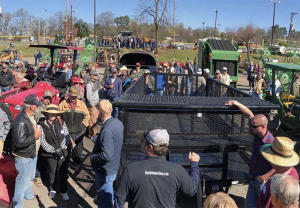 “Coming into a third generation business, my greatest accomplishment has been to keep the company running and growing,” Thomas says. “From the time I was old enough to ride in a car I was going with my dad to auctions.”
He started with minor jobs and trying to stay out of the way. As he got older, he helped set up sale sites, worked as a bid spotter, and eventually got his auctioneer’s license in 1991.
“It is a job where the only way to learn is to do. So I did, and I was horrible starting out,” he says with a laugh. “Over the last 28 years I have learned a little more, but I still learn something new at almost every auction.”
With experience, he has gained perspective and is honored to carry on the family business.
“My father and mother were both my heroes and my mentors,” he says. “When I was young and starting out, I thought that it would be easy to run a business and make the daily decisions. After a few years on the job, I started to see that my parents were business geniuses!
“I feel the responsibility that my family has put on me to continue running a business that has so much of my families blood, sweat, and tears invested in it. The auction business is like most businesses; it has changed a lot over the last 20 years. It is a constant battle to keep up with new technology and new competition. There is a high number of third generation businesses that fail, and that stays in my mind on a daily basis. My motivation is my intense fear of failure.”
Lucky for him, he’s in a place where his services are valued.
“Arkansas is an auction state. Arkansans love a good auction,” he says. “When I’m auctioning in my home state, I feel like I’m getting to work with family.”

Four Announced As Finalists for 2020 Arkansas Teacher of the Year
August 2, 2019

One Year Later: The Discovery of Ebby Steppach’s Remains
May 22, 2019