By Marla Cantrell | Photography by Jamison Mosley
At Terra Studios, less than 20 miles from Fayetteville, a wonderland unfolds across six acres that have been baptized in art. Here and there, sculptures of trolls and dragons appear. Purple blown-glass petals bloom from concrete spheres, and other sculptures of giant flowers with smiling faces welcome all who visit.
Not far from the happy flowers, off a path that meanders into the woods, is a labyrinth edged in Arkansas limestone. People from as far away as South Africa have come here to meditate as they walk its spiral path. For as far as you can see, the majesty of nature appears: a squirrel on a high limb, ferns hugging the bases of trees, a lake arched by a wooden bridge. Look closely and you’ll see sculptures rising from the forest floor, at the base of the bridge, at the edge of the paths.
Even the gallery, 7,000 square feet in size, seems as if it has risen from a fairytale. The massive arched front door creaks open on iron hinges to reveal an entry where a small, manmade stream meanders along. Before you enter, though, stop at the door. Set your gaze slightly below the doorknob and you’ll see another miniature door carved there, just big enough for a troll to walk through. Or a 2-year-old. 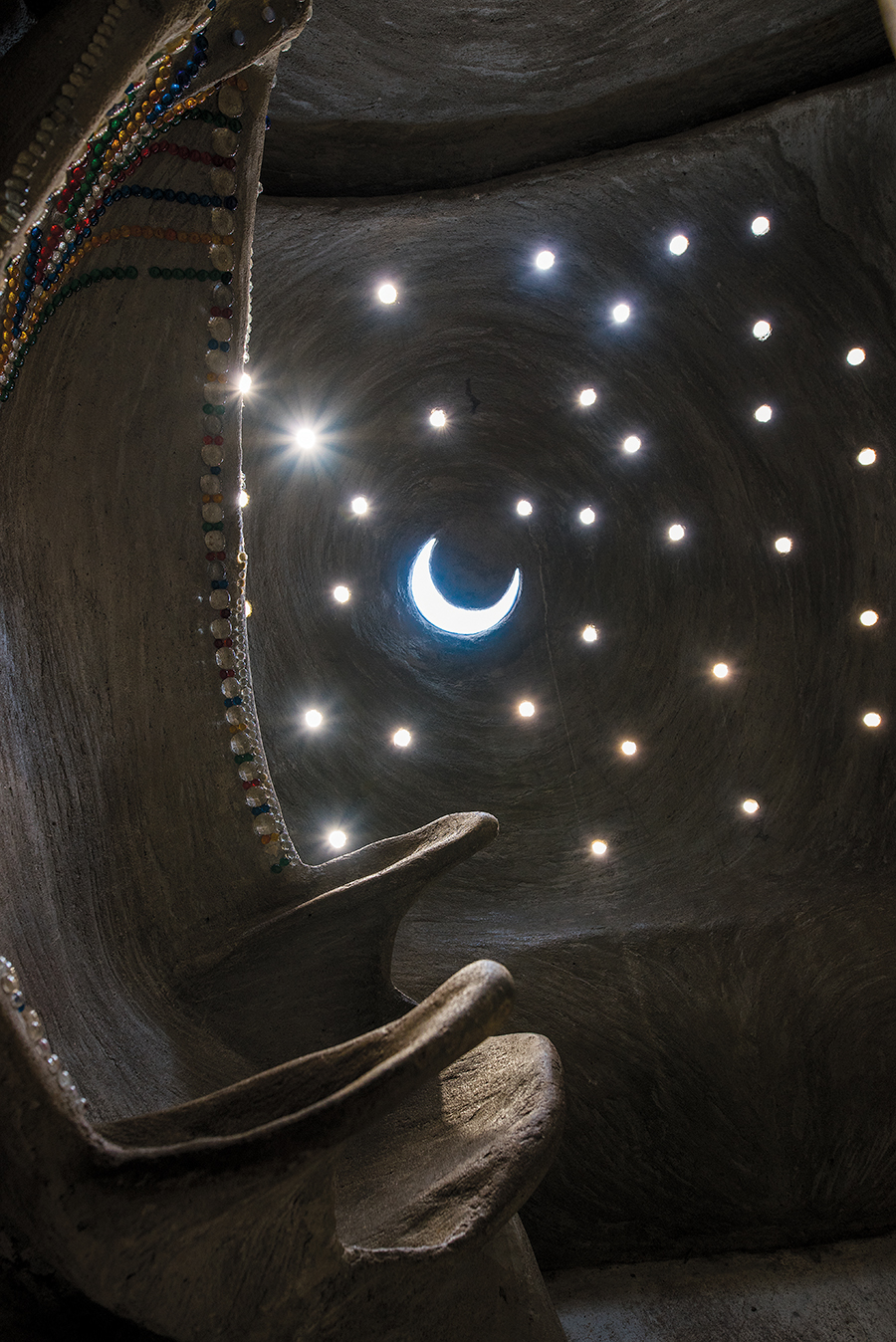 “Terra Studios is a great place to get comfortable with art.”

At least that’s what Val Gonzalez, Terra Studios’ executive director, says. She points toward the door and tells the story of a recent visitor who sought her out. She looked at his 6-foot-2-inch frame and listened as he recalled being an average-sized 2-year-old. One day while he was on the grounds, the artist who made the door asked him to stand at its base. The boy did, careful not to fidget, while the man traced an arch around him, just big enough for his toddler self to walk through.
One of the best parts of Gonzalez’s job is hearing stories like this one. Those who’ve grown up visiting Terra Studios share memories of coming here with school groups or in the summer for art classes or having a picnic on the grounds.
There are still others who come from far and wide because of the Bluebirds of Happiness, which are made daily from early March through December by glassblowers Duane Dunn and Gary Carter. (This year, the glassblowers return on March 10.) An entire room in the gallery, complete with an oven that heats to 2,000 degrees, is dedicated to the making of these iconic birds, small enough to hold in your palm. While either Dunn or Carter works, visitors gather, some stunned by the fact that these artists can make 25 Bluebirds an hour, which they then sign and date.
“Those of us who work here can look at a bird and say, ‘That’s a Duane. Or that’s a Gary,’” Gonzalez says. “I don’t think the general public can, but we can see the subtleties, the small differences in how they work and what they do.”
Gonzalez has stopped counting the number of couples who’ve walked through the door, from all over the United States, carrying the Bluebird they received as a wedding gift, sometimes decades before, wanting to see where their tiny sculptures were made.
When she has a chance, Gonzalez tells them the story of how these birds came to be. The creators of Terra Studios, Leo and Rita Ward, came to this part of Arkansas in 1975 from California and built the compound’s first pottery and glassblowing studio.
Leo started making the birds, which were brown. Something about that seemed off to Rita, who was mesmerized by the bluebirds that zipped around the property. She asked Leo to switch the color to blue, and that made all the difference.

“I can’t tell you how good it is to work at a place where there’s so much unbridled creativity.”

Since 1982, more than 9 million Bluebirds of Happiness have been sold, some as far away as Japan and Australia. Gonzalez says once you begin to notice these Arkansas wonders, you’ll see them everywhere. Her latest sighting was while on a recent trip to Hawaii.
As she’s saying this, Jamie Ulick, who worked with the Wards and bought the property in 2007, overseeing its transition into a non-profit seven years later, joins the conversation. He is haloed in light from the wide windows. He is surrounded by pottery, sculpture and jewelry that’s showcased across this gallery where 125 Arkansas artists sell their work. “It’s been a pleasure to work with local artists, to help them learn to market, to get their work noticed by a wider audience,” Ulick says.
“I can’t tell you how good it is to work at a place where there’s so much unbridled creativity,” Gonzalez says. “Our oldest artist who sells in the gallery is in her nineties. Our youngest is 14. We have artists who are extremely well-known and those just starting out. 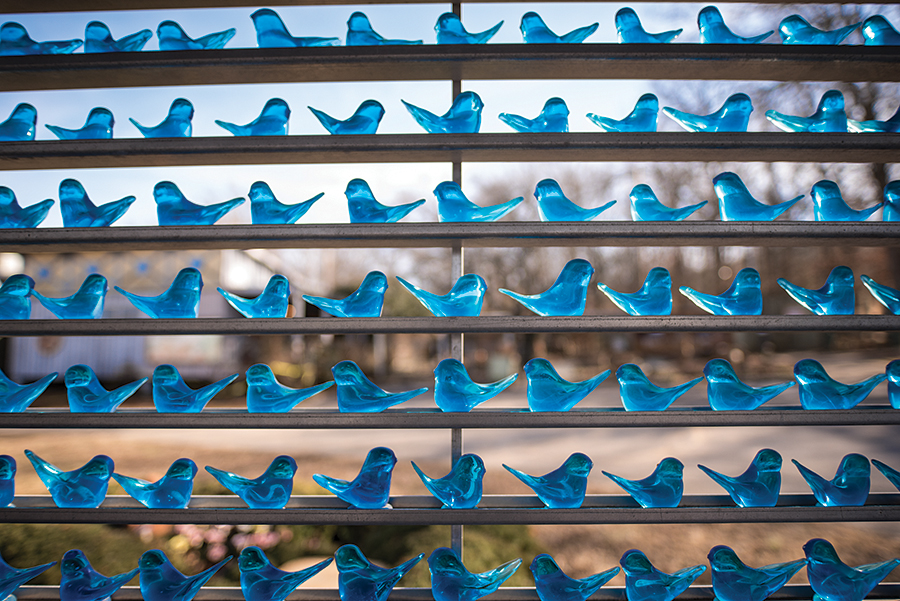 A flock of Bluebirds of Happiness sits in rows.

“When I think about how to describe us, I’d say we’re probably on the sweeter side of art, and a lot of what we have is functional, like pottery egg separators with funny faces on them. Terra Studios is a great place to get comfortable with art, to not be intimidated by it.”
While the art is one of the best parts of this place, another big perk is the activities for kids. There are some free classes, others that charge a nominal fee and scavenger hunts that go on year-round. And when spring break and summer break arrive, the campus sings with kids who come for the special programming.
Adults are also encouraged to try something new. Ulick advises calling ahead if you’re interested in a specific class like silk scarf-making or pottery. The staff will let you know what’s available and the cost or will offer private lessons for small groups.
“Everyone can be creative,” Ulick says, and Gonzalez agrees.
There is evidence to support the claim in every corner of the gallery. Just outside stands a gazebo with a metal frame lined with rows of Bluebirds of Happiness, another miracle of creativity. Sunlight is sparking off the blue glass, which verges on the color of turquoise. Thirty-six years ago, the first Bluebird was forged with fire, a bit of shimmering glass that encapsulated a world of happiness and it continues spreading happiness today. And you can see it all at Terra Studios. 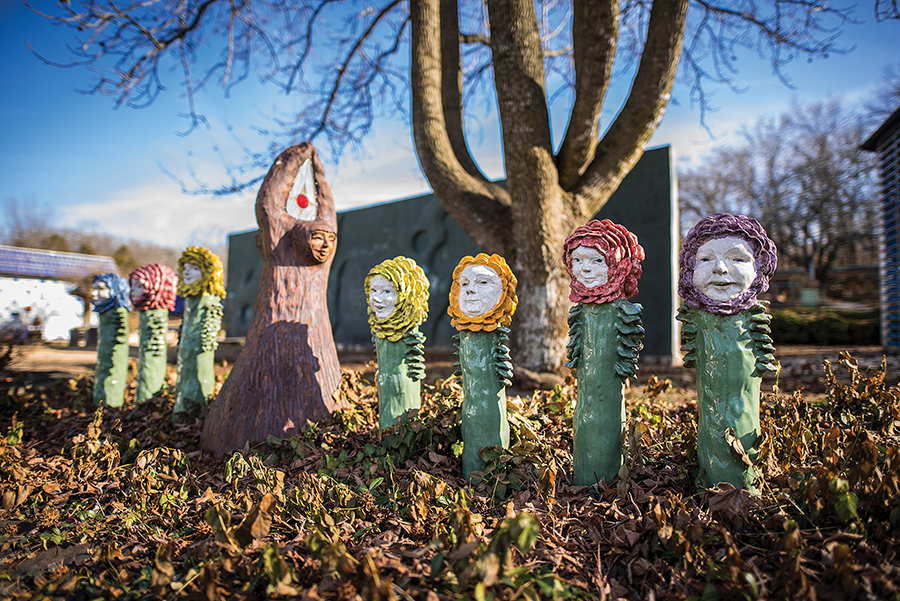