Get a Little Bluegrass in Your Soul 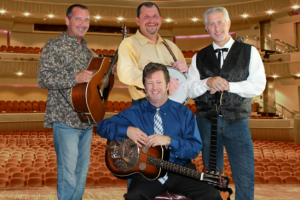 Need a little rhythm in your soul? Next Monday, make the trip to Paragould for a healthy dose of down-home bluegrass to cure what ails you.

On Monday, June 24, the award-winning bluegrass band the Farm Hands will perform at the Collins Theatre in downtown Paragould. The concert, part of the Bluegrass Monday concert series presented by KASU, 91.9 FM, will be held at 7 p.m.

The band is made up a talent collection of experienced bluegrass musicians, including Tim Graves, Daryl Mosley, Keith Tew and Don Hill. Graves is the featured vocalist and dobro player, and he has won the Dobro Player of the Year award for 14 times. Fun fact: His uncle, Josh Graves performed with the Foggy Mountain Boys.

Mosely is the band’s bass player and also sings. At the age of 16, he got his start at Loretta Lynn’s Ranch in Tennessee. He’s also a songwriter and has had songs featured on American Idol and The View.

Tew is the Farm Hands’ guitarist and is a four-time Guitar Player of the Year nominee. He has been nominated for a Grammy for his songwriting and won two SPBGMA’s Song of the Year awards.

Don Hill, the band’s banjo player, has been a state champion banjo player in Alabama, Kentucky and Tennessee.

Since forming in 2010, the Farm Hands have amassed 30 awards and have been nominated for more than 80. In fact, they were named the Bluegrass Gospel Band of the Year for 2019 at the Bluegrass Music Awards.

There is no cost, but there will be a donation plate, and the suggested donation is $5.