No matter what we look like on the outside, it’s what’s inside that matters most.

My profound love for all things Mexican food means I have long been a fan of the burrito. I mean, it is literally a rolled-up package of food, a gift from the culinary gods. But as you will soon find out, some of the best burritos in Central Arkansas can’t be pigeon-holed into one cuisine. We’ve got some great options, and this list only scratches the surface of what is out there. 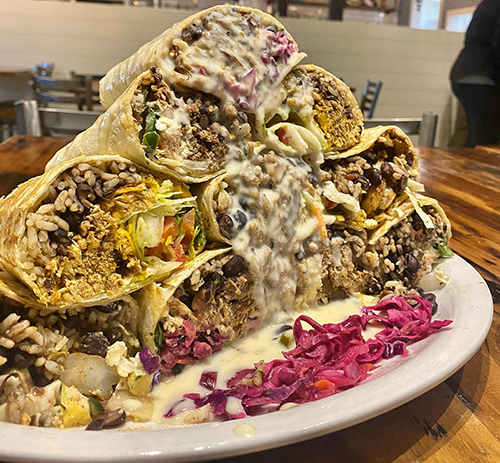 How does slow-smoked, shredded pork with chipotle aioli, a sour orange-red cabbage, jicama slaw, fresco cheese and avocado sound? Oh, and I almost forgot about the copious amount of queso that drenches the entire concoction. Baja Grill’s Cuban Burrito is as beautiful as it is tasty, and if this flavor combination is not your thing, just know that the restaurant has plenty of other burrito options, like the Blackened Shrimp, Baja Beef, Caribbean Jerk, and Pig Sooie. They will even serve it sans tortilla, but is that really even a burrito? I say no. Either way, one thing is for certain: You will never leave Baja Grill hungry. 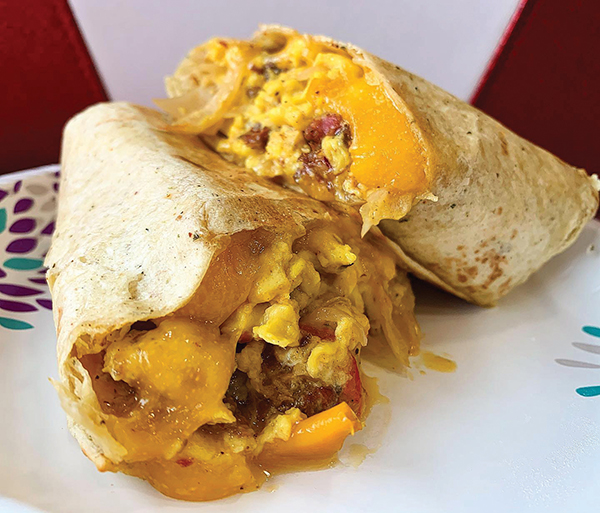 Dutchman Burrito, At the Corner

Dutchman Burrito, At the Corner

The morning hours are a perfect time to enjoy burritos, and inside Little Rock, it does not get any better than the Dutchman at At the Corner. The popular downtown eatery has a morning menu filled with several fantastic options, but you would be hard-pressed to top this burrito packed with scrambled eggs, sausage, cheddar, peppers and onions. It is an irresistible blending of ingredients, something the kitchen has become known for over the past few years. If you are with a tablemate and get a hankering for something else (like the house-baked cinnamon rolls), just know that the Dutchman is an ideal item to split. 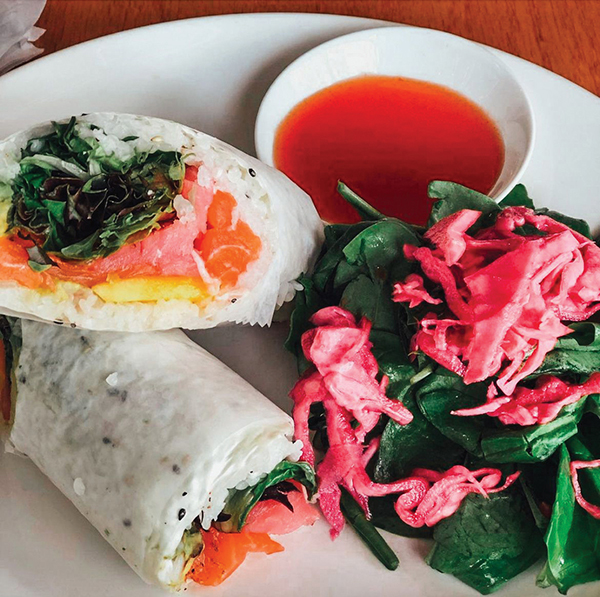 Speaking of burritos that blow by traditional boundaries, Kemuri offers up three varieties of its sushiritto, including the Tokyo Chicken with grilled chicken, crab stick, lettuce, spicy guacamole, crispy shallots, goma shiro (sesame seed paste), rice and honey miso; the Seaside with raw tuna and salmon, as well as crabstick, lettuce, mayonnaise, avocado and seasoned rice; and the Firecracker with tempura shrimp, spicy crab, cucumber, avocado and lettuce. The latter two will certainly satiate your sushi cravings, all in a handheld format and available during the lunch and brunch services at Kemuri. 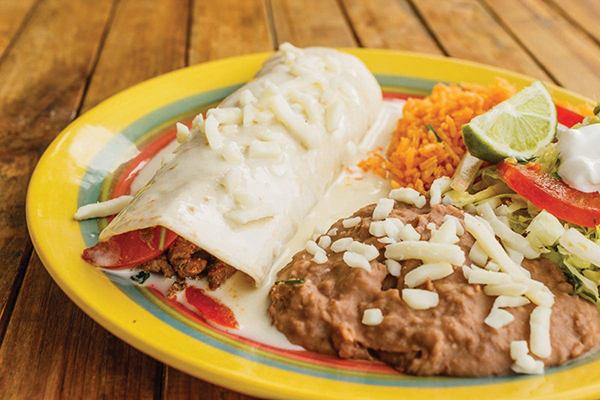 If you love gut-busting burritos, then head over to La Pasadita for the Burrito California, but just make sure to ask for it covered with a thin layer of queso. (Hey, I am a firm believer that liquid cheese makes everything better.) The restaurant stuffs each flour tortilla with what seems like a particularly large amount of rice and a protein of choice. Opt for the pastor (pork) or asada (steak), and this burrito also includes refried beans, cheese, sour cream, lettuce, cilantro and onion. I have yet to finish this one by myself, so if you are anything like me, just know that the Burrito California makes for great leftovers. 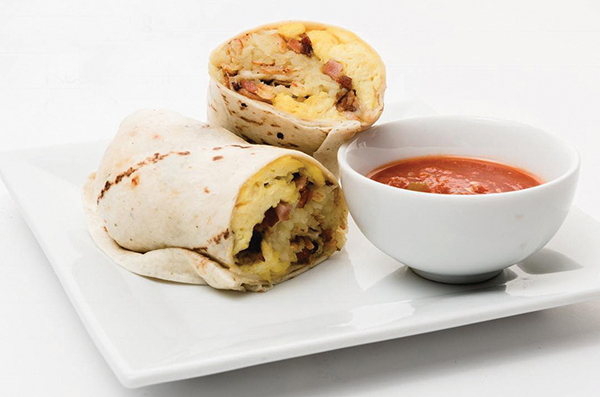 Stoby’s is a veteran in the industry, long known for its straightforward approach to the classics, all served in a casual atmosphere with downhome service. The breakfast burrito is an example of a dish done right; it is loaded with what I imagine is a meat lover’s paradise, including bacon, diced ham and country sausage. The large, garlic-herbed flour tortilla also includes a heavy hand of scrambled eggs and hash browns. And because we are talking about Stoby’s, you know this burrito will come with a side of the wildly popular spicy white cheese dip. Picante sauce also makes an appearance, but — let’s be real — all your focus should be on the cheese dip.

If you do not know about El Torito, the hidden gem of a taqueria and food store located at 303 South Bowman Road in Little Rock, consider this as a formal alert. The grilled steak and shrimp fajitas are some of the best in town, as are the churros. But so too is the Burrito al Pastor. It comes in two sizes (regular and special), and while it includes marinated pieces of pork, avocado, cheese, tomato, sour cream and lettuce, the real magic resides in the bits of sweet pineapple that pair well with the saltiness of the meat. Make sure to leave a little stomach space for an order of tacos as well.

Elia’s appropriately named Super Burrito is the size of a small throw pillow, which makes sense, seeing as if you can somehow finish this monstrosity, a long nap or extended food coma will immediately follow. A 12-inch flour tortilla is packed with a substantial list of ingredients, including steak, grilled chicken, chorizo, pork, bell pepper, onion, tomato, lettuce, jalapeno, sour cream, rice and refried beans. Everything is smothered in white cheese sauce because this is Arkansas, and we take our melted cheese about as seriously as anything. Yes, the burrito is enormous and by far the biggest option on this list, but it is also quite delicious, making a trip to the Morrilton restaurant a must-do in the near future. 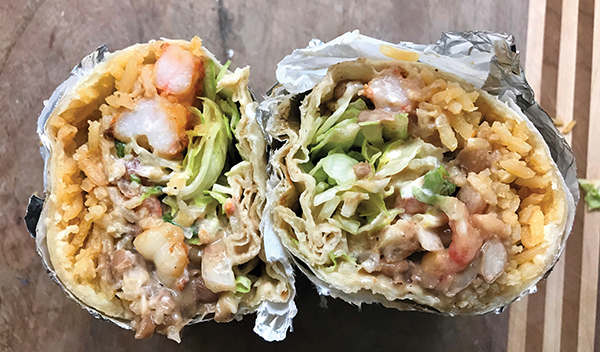 Out of all the wonderful burritos mentioned in this article, the shrimp offering at Taqueria El Palenque is without question the one I have eaten the most, probably a minimum of 50 times in the past decade. Two things separate this burrito from most of the competition: a plentiful amount of plump shrimp and the inclusion of caramelized grilled onion. A thin layer of refried beans helps meld the flavors, and, along with rice and a small dollop of sour cream, make for a burrito like none other in Little Rock. Newbies need to keep an eye out for the restaurant, as it’s tucked back in the corner of a strip center off Rodney Parham Road.

The Burrito al Pastor at Las Delicias in Levy is sneaky good. The presentation is modest, but what it lacks in eye-popping visual appeal it makes up for in the taste department. Think of it as a burrito’s burrito — just a simple, adequately sized tortilla filled with marinated pork, refried beans, rice, cheese, lettuce and tomato, all for just $4.99. This area of Levy is filled with fantastic taquerias all within a half-mile radius of each other, but I think you will find that Las Delicias, which also doubles as a small grocery store, is hard to beat.

Blue House Bakery and Café in Bryant, much like Las Delicias, does not make waves with a huge burrito, rather one that is meant to feed a human with a normal appetite. The breakfast burrito is a simple one, including scrambled eggs, chunks of sausage and American cheese in a flour tortilla. But it is the melding of these ingredients that sets things apart. The steam from the hot, perfectly cooked eggs that reside inside the tortilla melts the cheese, making for this gooey combination that is sure to get you going in the morning hours and pairs well with coffee.

Pick your protein and El Porton, with two locations in Little Rock, probably has a burrito showcasing it. The menu features a whopping eight choices, including: Verdes, Seafood, Deluxe, Rojo, California, Toluca, Cheese Steak and Jalisco. Over the years, I have probably tried them all, but it is the Jalisco, which is stuffed with pork along with cooked tomatoes, onions and bell peppers, that keeps calling my name. El Porton then tops it with cheese sauce, along with lettuce, tomatoes, and guacamole. This burrito proves once again that just about everything is better with cheese sauce.

When it comes to enchiladas, Local Lime and Heights Taco & Tamale Co. have mastered the concept.

If you enjoy a little heat, make sure to order the Ark-Mex enchiladas on your next visit to Heights Taco & Tamale Co. Go with the braised ground beef as your filling of choice for the two corn tortillas which are then drenched in a spicy red chile sauce and gooey cheese. The dish is served in a cast-iron skillet, a move that ensures the cheese will still be bubbling after it hits the table. The presentation is gorgeous, and the taste is even better. You have a choice of two sides. I recommend the green chile tomato rice and refried smokey bacon pinto beans. Like every dish at Heights Taco & Tamale Co., the Ark-Mex Enchiladas pairs well with one of the restaurant’s signature frozen mojitos.

Don’t let the mild flavors of Local Lime Spinach Enchiladas fool you. There is a lot going on under the queso fresco-soaked flour tortillas, including a filling that blends pieces of spinach and artichokes with Manchego and Jack cheese, sour cream sauce and New Mexican red chili sauce. A huge wedge of perfectly ripe avocado rests on top, which I am a firm believer heightens just about any dish in the Mexican cuisine. The enchiladas are served with sides of black beans and cilantro lime rice in a dish that is sure to appeal to taste buds across the board. For an additional cost, proteins like chicken, salmon, grilled shrimp and carnitas can be added to these enchiladas. And if you opt not to order a margarita on the rocks with your meal, then consider it a huge mistake. 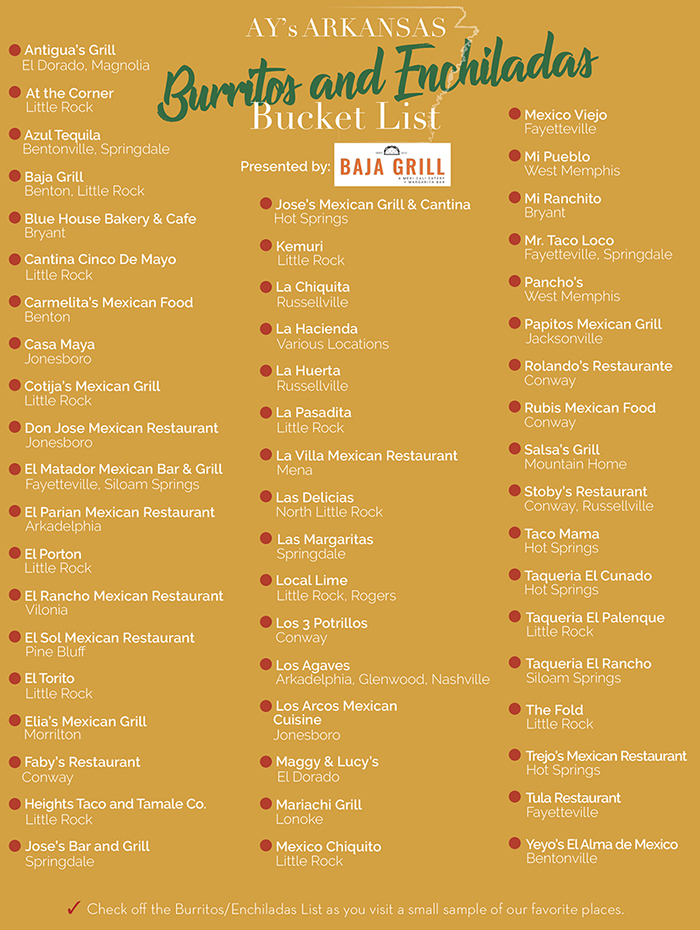