The Book of Mormon is Coming to Little Rock!

The Grammy and Tony award-winning musical The Book of Mormon is coming to Little Rock this February for the first time! This hilarious Broadway musical, written by the creators of the television show South Park, is bringing its unique style of music and comedy to the Robinson Center.
AY caught up with Henry McGinniss, a swing for The Book of Mormon for an interview. 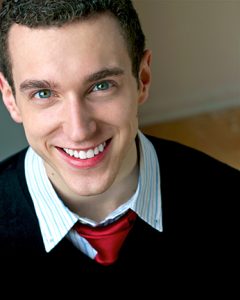 What is your role in this production?
“My role is a swing for the production, I am also the understudy for one of the leads. Basically, my job is to make sure that the play happens every night. I cover eight different tracks. That’s essentially one of our actor’s entire show for the day. So anytime someone has a vacation or personal day or sick or injured, I get the call and then go into that individual track. Basically the job of the swing and the understudies are there to make sure to come rain or shine (because) we have a show and the show will go on.”
How has “The Book of Mormon” been received so far on this tour?
“Oh, it has been incredibly well received. It uses explicit language, it is written by the writers of South Park, Trey Parker, Matt Stone and also Robert Lopez who assisted with Avenue Q, so they don’t really pull any punches in terms of the language that they use. But it’s just so funny and it has so much heart as well. In addition, it has a really great message for audience members.” 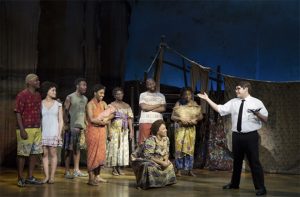 Who is going to love this show?
“I feel like our show in particular is really great for all audiences. It’s a show that I think people who maybe haven’t been to a musical before could come and see just because it’s so funny and it feels like a live episode of South Park.”
What has been the most challenging part for you during this production?
“The most challenging part for me was just learning how to be a swing. It’s my first time ever being a swing on a production and it is an incredible amount of work. I have seen it a few times, but I had to learn all of the words, harmonies, choreography, how to reverse it for being on the opposite side of the stage when I’m different characters. And then I also had you learn the entire track for one of the leads in the show as well.”
Why did you want to be part of the book of Mormon?
“I remember seeing it while it was in previews and just looking up at the stage at everything they were doing and thinking it’s the most brilliant show ever. I was a senior in college at the time looking up at the stage and thinking ‘I need to be a part of that show’.” 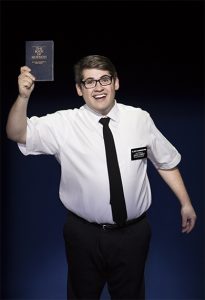 Is there anything else you’d like for readers to know about the show?
“If you haven’t seen it, please come check us out. It’s definitely going be a good time and a lot of laughs. If you have seen it, come back and see us again. It’s a really special show.”
Visit Celebrity Attractions’ website for tickets and for more information.
READ MORE: Arkansas Bucket List
Images courtesy of Celebrity Attractions