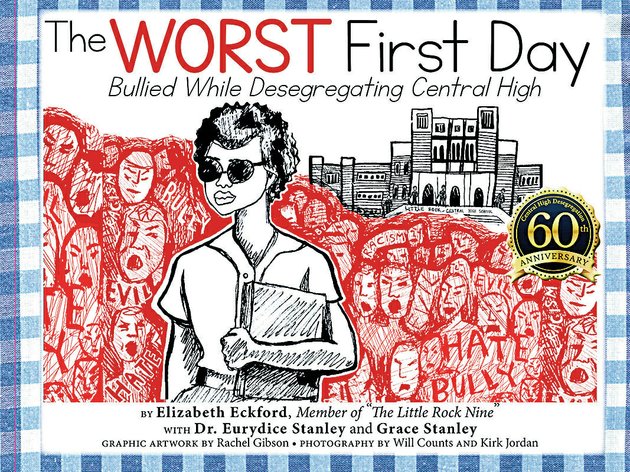 Zoie Clift, travel writer
Arkansas Department of Parks and Tourism
Arkansan Elizabeth Eckford has a new autobiography out about her experience as a member of the Little Rock Nine, the group of black teenagers who integrated Little Rock Central High School in 1957. The book is called The Worst First Day: Bullied While Desegregating Central High and is about her first year at the school.
Central High was one of the first federally ordered integration acts. At that time, the United States was a nation of racial inequalities and segregation. This school was a major test in 1957 of the Civil Rights act when these nine (the Little Rock Nine) students integrated the all-white school.
The historic photo of a 15 year-old Eckford walking to school that first day with books in hand as students yell at her from behind is one of the most famous images from the civil rights era. 2017 marked the 60th anniversary of the desegregation of Central High and the story is a reminder about how far we have come but how far we as a society still have to go with issues like bullying still existing. Central High has since become the Little Rock Central High School National Historic Site and is the only active high school in the U.S. that is also a national historic site. It is also part of the U.S. Civil Rights Trail.
Eckford wrote The Worst First Day: Bullied While Desegregating Central High with Dr. Eurydice Stanley and her 15-year-old daughter Grace. “The book creates synergy between anti-bullying education, history, and literature by leveraging lessons from her traumatic experiences at Central High,” said Stanley. “Most importantly, it showcases the importance of allies and encourages students to take a stand against bullying.”
Stanley said through the book’s prose, graphic artwork, photography and essays, a hope is to increase reader’s understanding of the challenges that were faced implementing the Supreme Court Brown v. Board of Education Decision of 1954 in Little Rock. “The authors hope to combat bullying and bias with awareness and resilience,” she said. “Elizabeth and I have been friends for 20 years. During all of that time, I’m pretty sure I asked her at least once a year why she didn’t have a book. Her story is so compelling, and it was wonderful to finally have the opportunity to tell her story her way from her perspective.”
“I hope this book allows the reader to see the depth and breadth of the Central High Crisis,” she added. “It was truly challenging to limit the information to what was finally published in the book. There is simply so much that people need to know regarding the backstory.”
Stanley said the book will soon be available on Amazon, but in the interim, signed copies are available in Little Rock at the Pyramid Art, Books & Custom Framing store at 1001 Wright Avenue. Additionally, Pyramid will host a book reading and signing on March 24. Copies of the books will also soon be available in the Little Rock Central High National Park Historic Site bookstore.

The book is illustrated by Rachel Gibson, a Harding University graphic design student, and the memoir is told completely in verse, coupled with photographs, historical documents, and essays. A few of the awards received by the Little Rock Nine in recognition of their contributions to the civil rights movement include the Congressional Gold Medal, America’s highest honor.
“Ms. Eckford is so appreciative of the wonderful response that she has received to date from her book,” Stanley said. “She is humbled by the support received from the citizens of Little Rock…She considers her first book to be a dream come true 60 years in the making.”
By Leah DiPietroApril 19, 2018
Share this post
Share on FacebookShare on Facebook TweetShare on Twitter Pin itShare on Pinterest Share on LinkedInShare on LinkedIn Share on WhatsAppShare on WhatsApp