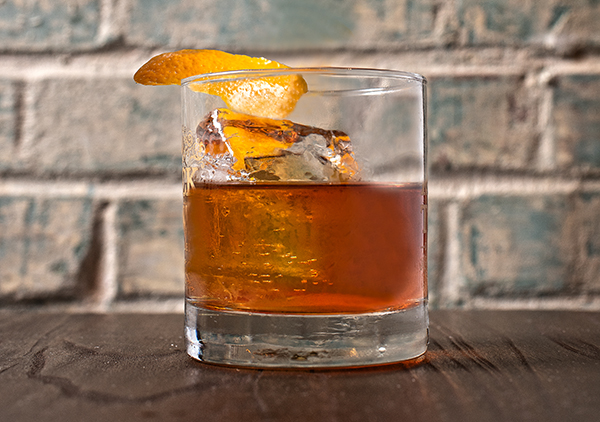 In June of this year, a Jim Beam warehouse in Versailles, Kentucky, caught fire and burned to the ground. Aside from the loss of the structure and its contents, it was a relatively minor event as no one was injured in the accident. But 45,000 barrels of the company’s product went up in flames, so bourbon fans across the country wept, nonetheless.

I’m a casual whiskey consumer, but I’ll admit even I stopped what I was doing when I heard about it.  Ever since getting really turned on to the only true American spirit there is last year, my interest in bourbon has deepened, even if I don’t drink it every night. I might have even checked follow-up reporting on the blaze here and there. “Ain’t that a shame,” I thought.

Part of bourbon’s appeal for me is professional, as the stereotype of writers and booze going together like spaghetti and meatballs is only mildly exaggerated. Both Mark Twain and William Faulkner were known for their love of bourbon, Hunter S. Thompson and Raymond Chandler, too.

Put all that together and bourbon holds a coolness factor that you don’t find in many other spirits, Scotch probably coming the closest. Rum or tequila? Not even close. Bourbon is the accompaniment to deep thoughts, the silent listener to an evening’s conversation, your American birthright in a glass.

Bourbon resides in that family of American whiskey broadly shared by rye, Tennessee and corn varieties. It’s a category that’s a little wilder around the edges and unapologetically so, I might add. The United States is one of only two countries worldwide to spell whiskey with an “e” and why?  Because we damn well feel like it.

But even within this herd of bottled mustangs, there are rules. Tennessee whiskey must be made in Tennessee alone to legally qualify for its label. Bourbon is made from at least 51 percent corn, but it’s not corn liquor — moonshine — which must have a minimum 80 percent corn in the mash and is aged in uncharred barrels, if it’s aged at all. Rye and wheat whiskeys all have similar vagaries of their own that make them what they are.

It’s not fair to say bourbon is a more refined spirit than its brethren — just like anything, there are selections that are sublime and there are bottles that only serve to make you question your life choices. It’s also not accurate to say bourbon alone is of American aristocracy. George Washington himself operated a respected distillery at Mount Vernon, but it wasn’t turning out bourbon, it was famous for rye whiskey. Arguably the most famous American whiskey brand of all is Jack Daniels which, while technically bourbon, is legally Tennessee whiskey, as the makers of the stuff will promptly and sternly inform you.

This much we do know:  In addition to the corn content, bourbon must, by law, be aged in charred new oak barrels and those barrels can be used only once. Bourbon must go into the barrel at 62.5 percent alcohol and go into the bottle at a minimum of 40 percent alcohol by volume. Nothing can be added to the whiskey – no coloring; no flavoring – save for some water to manipulate the alcohol content to the desired level.

The most elemental version of the spirit is cask strength, which means as it comes out of the barrel, so does it pour into your glass. It’s nothing to monkey around with as no steps have been taken to get the alcohol content down. You’ve been warned.

What truly piques my interest in bourbon is the history in the whiskey. Just like gin evokes images of prim British tipplers and vodka that of burly Russian oligarchs, bourbon speaks of a brawny land and its people in a language all its own. It was created, after all, by early settlers who made whiskey out of whatever they had on hand. In colonial America, that was corn and water that, depending on where you lived, had varying degrees of this characteristic or that. It’s why distilleries tend to get clustered together, because of the local terroir and mineral content of nearby water sources.

Thus is 95 percent of all bourbon still produced in Kentucky, but nothing says it has to be and in the latest bourbon boom, distilleries have popped up coast to coast. According to the American Bourbon Association, there are currently around 90 distilleries in 29 states, including Arkansas.

And, after a 30-year span where the hooch nearly died out, bourbon has been on a tear over the past 20 years or so. The Kentucky Distillers Association reckons 1.8 million barrels of bourbon were produced in The Bluegrass State alone in 2017, the highest production level in 50 years. And yet, many distributors and retailers still can’t keep up with demand.

The influx of newcomers demands a reintroduction of the spirit to a new audience, something any qualified barkeep is more than happy to do. If you’re one of them, know this: You only come to understand bourbon by tasting it, but that doesn’t mean you can’t get your terminology straight or get an idea of what to expect beforehand by doing a little research prior to heading to your favorite watering hole.

At the very least, know how to order; either “neat” (whiskey in a glass) or “on the rocks” (whiskey over ice). Anything else, even whiskey and water, is a mixed drink, altering the flavor and bite of the spirit. One exception to this is adding just a couple of drops of water to the whiskey, which experts claim opens up the nose and flavors while toning down the sting.

A single whiskey will include around 1.5 to 2 ounces, although there’s no universal measurement for it. A double is two shots, and is, obviously, more expensive. You must designate a double when ordering, otherwise, the bartender will serve you a single by default.

And, unless you’re trying to drink someone off your mind, don’t throw it down like you’re back in Cabo with your spring break crew. Remember, bourbon is made to be sipped, damn it, so straighten up, tuck in your shirt and try to act like a grown-up.

*Ron Swanson is a fictional character from the NBC television series Parks and Recreation, who is a lover whiskey and steak, not unlike AY’s own Dwain Hebda.