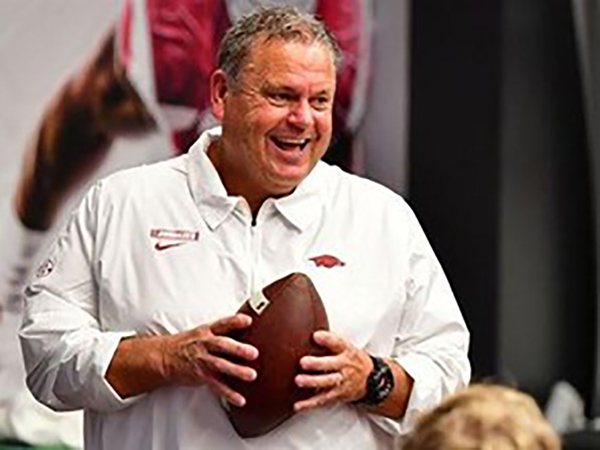 Razorbacks head football coach Sam Pittman will be honored by the Boys & Girls Club of Central Arkansas for its 2021 Leader of the Year Banquet.

This year, the banquet will be held at War Memorial Stadium on Thursday, June 10 from 6:30-8 p.m. David Bazzel, a talk radio host for 103.7 The Buzz and a former Razorback football player, will serve as the master of ceremonies for the event.

“It’s exciting. That’s one of the reasons I feel so good about it,” she said. “Normally, we have at one of the clubs in our gym. I’m so excited about having it on the field at War Memorial Stadium with the head football coach.”

This marks the first event that the Boys & Girls Club has held in-person since the onset of the COVID-19 pandemic. As a result, Doramus said the organizers will be taking necessary precautions, including spreading tables out for social distancing.

“We’re trying to get everyone back together, back out and support the children in our community,” she said.

Looking ahead, Doramus said that the Boys & Girls Club has more planned for 2021, including a food festival in the fall. For the third year, the organization will host the Italian Food and Wine Festival, which will be held on the grounds of Heifer International in September.

Individual tickets to the event are $150 and include seating at an open table with dinner for one.

There are also tickets for stadium bleacher seating available for $50. These tickets allow for admission to the event, but access to the field will not be allowed and dinner will not be included.