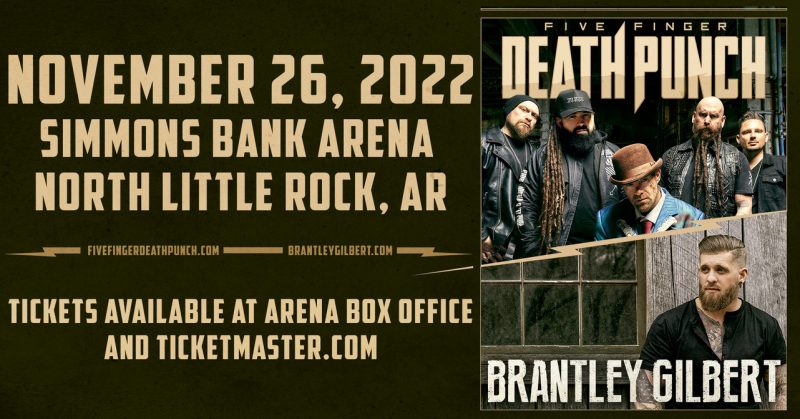 Five Finger Death Punch and Brantley Gilbert, both multi- platinum powerhouses, have announced that they will not only be teaming up this fall for a U.S. tour, but that they will also be making a stop at Simmons Bank Arena on Nov. 26.

Five Finger Death Punch has over eight billion streams to date and the release of Afterlife is highly anticipated after their 2020 album, F8, debuted as No. 1 on rock charts around the world. Recently, their song “Darkness Settles In,” was featured on the soundtrack of The Retaliators, a Better Noise Films Movie that will premiere on Sept. 16. For more information about the rock band, visit its website.

Gilbert recently released “Son of the Dirty South,” which features Jelly Roll. Gilbert has had back-to-back Platinum albums and has several No. 1 hit singles like “Dirt Road Anthem,” “My Kinda Party” and “Country Must Be Country Wide.” For more information about the country music star, click here.

This tour is not the first time Gilbert and Five Finger Death Punch have collaborated, as they partnered on No. 1 global hit “Blue on Black,” in 2019, which has had 110 million YouTube views and 62 million Spotify streams to date.