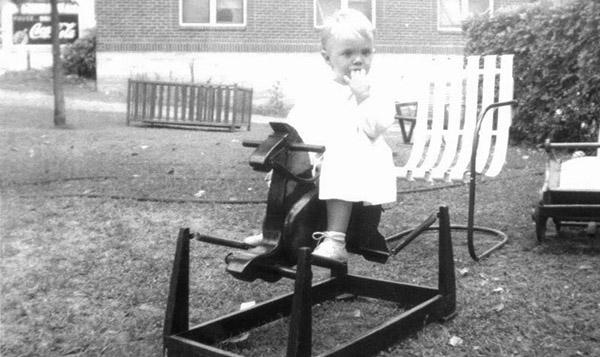 While Oaklawn jockeys raced on their horses in Hot Springs, Roy Rogers rode off into the sunset on Trigger and Festus limped after the steeds in Gunsmoke, thousands of children galloped in their own homes half a century ago.

The Wonder Horse, a popular spring-action toy that replicated the riding motion of a horse, was a staple entertainment for kids around the country in the 1950s and ’60s. It continued when children grew up and gave the toys to their own kids.

Despite its massive popularity back then, the Wonder Horse had a humble beginning, created in the workshop of a Pocahontas man who was constantly making things for his own children. 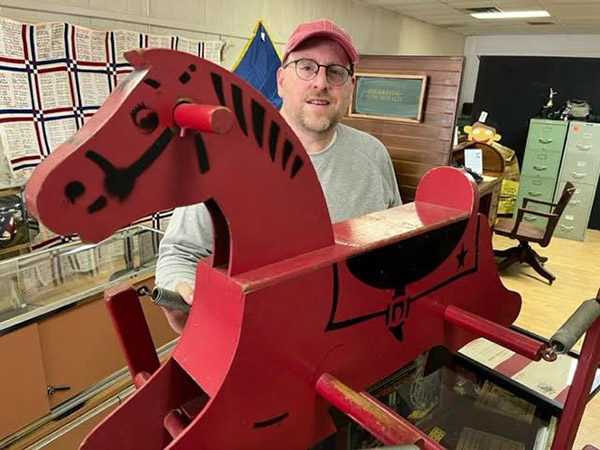 William Baltz, an engineer and Randolph County surveyor, built the horse for his 3-year-old son, Billy, in December 1939. Baltz, born on Sept. 15, 1888, said he was getting too old to bounce his son on his knee to imitate the trot of a horse and devised the toy, according to Rodney Harris, an associate professor of history at Williams Baptist University and the director of the Randolph County Heritage Museum.

The museum, located on the Pocahontas town square, has a display dedicated to Baltz and his invention. 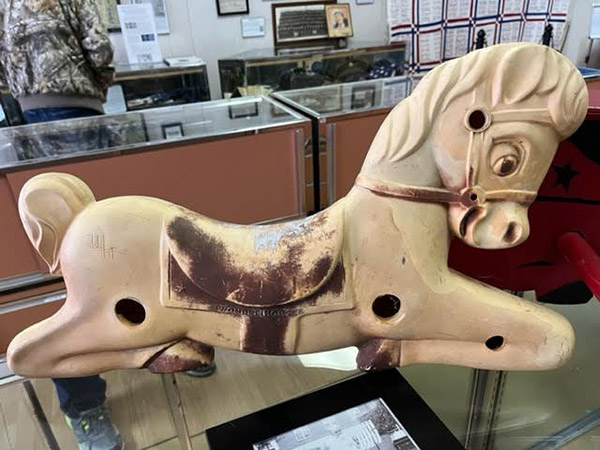 After Baltz obtained his patent and a company bought it, a plastic version of the horse was created. (Kenneth Heard)

The first wooden horse was made of cypress floor joists and old packing crates. Baltz painted the horse tan and brown and suspended it on four frame posts by thick, heavy springs. Handles jutted out on either side of the horse’s head, and riders gripped them, rocking back and forth to get the horse moving.

Depending on the weight of a child, the toy could either gallop like a 3-year-old thoroughbred making the final turn at Churchill Downs or plod along like a plow horse turning a muddy field.

Baltz called it the Wonder Horse because, at that time, Arkansas’ nickname was “The Wonder State.”

His children would ride the horse in the yard at their home at Bettis and Rice streets. Bettis Street was the main thoroughfare through Pocahontas back then, and motorists who traveled from Little Rock to St. Louis would often stop to see the horse. And they asked if Baltz could make the toy for them.

He began making the horses for customers in a workshop in his basement in 1940. He and a local carpenter could make up to 50 horses a day. He couldn’t keep up with the ever-increasing demand, though. 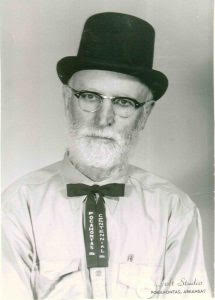 Baltz had done well even before creating the Wonder Horse. Born to German parents as one of 14 children, he didn’t speak English until he was 9. He became an engineer and, at the age of 29, was appointed as a county surveyor by Arkansas Gov. Charles Hillman Brough. It was a position he held for 50 years.

He was also a Works Progress Administration supervisor for Randolph County in the 1930s and owned a small factory that made window and attic fans. 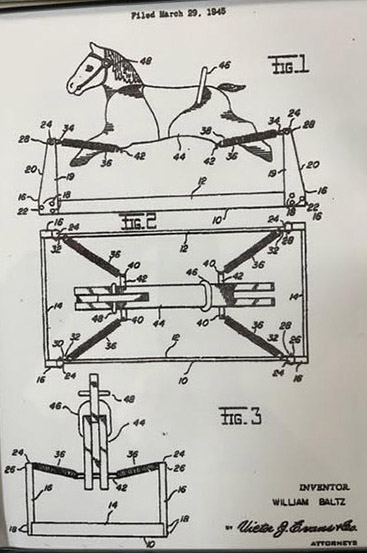 The design William Baltz used to gain a U.S. Patent in 1945.
(Kenneth Heard)

Baltz applied for a patent, and on March 29, 1945, he was granted U.S Patent 24371015A for a “suspended horse.” Nearly 200 companies rejected his patent when he tried to sell the idea to a manufacturer.

In 1944, though, A.G. Manning of Memphis, the owner of Associated Woodworks, Inc., bought the patent and began making the horses at his Collierville, Tennessee, factory.

The company produced four models of the horse for different ages and opened a second factory in Rockford, Illinois, to help meet customers’ demands.

There was the Original Wonder Horse, a plastic vinyl horse with a wooden frame for children ages 1-3. The saddle measured 16 ½ inches off the ground.

The Regular Wonder Horse was made of hardwood, and its saddle was 21 ¼ inches from the floor.

The horse’s motto, according to a sale brochure, was, “It’s gaited,” and it promised its “magic spring action develops grace, rhythm and muscle coordination.”

Lynn Garrott of Cordova, Tennessee, received a Wonder Horse when she was 2 or 3. She rode it so much, she says, that she developed blisters on her hands from grabbing the two handles.

But did that deter her? Neigh.

She pulled off her socks and put them on her hands to keep riding.

“I was a better problem solver then than I am now,” says Garrott, 72, a retired school teacher.

She gave her son, Daniel, a Wonder Horse when he was about 3. The family lived in Arizona then, and Daniel was immersed in the Western culture of the area. He wore a cowboy hat and boots and strapped on a toy six-shooter when riding the horse.

“He was quite impressed with himself,” Garrott says. “He rode the fire out of it.”

Seventy years after he rode his Wonder Horse, Atlanta artist Michael Goettee is still thinking of the ride. Goettee, 74, paints western scenery as a background and ads carved elements into the picture.

One work contains a carved, blue Woodie automobile that appears to leap out of a scrub brush landscape. Another features an armadillo-plated travel trailer parked near a red rock bluff.

His art is displayed in the Booth Western Art Museum in Cartersville, Georgia.

Thinking of the horse, Goettee says, gave him an idea for yet another western art project.

He wants to paint a desert scene with the front half of a carved Wonder Horse model jutting from the landscape.

“I think it’s such a testament to the imagination of a child,” Goettee says. “It’s such a crude sort of thing in design, but that horse was all I needed. I rode it in the 1950s, and I can still hear the sound of the springs.”

Dozens of people wrote of memories on a Facebook page devoted to the horse, saying they rode the Wonder Horse as a child and then passed it on to their children and grandchildren.

“Cracked my head open twice on one of those,” wrote Jay Rice, a priest in Liberty, Missouri.

“We had one for our girls,” another person wrote. “And they rode many miles.”

There are no records to indicate how much money Baltz may have made by selling the horses, Harris says.

“So many people had them,” Harris says. “I’m sure the original horse spawned other ideas, too.”

The museum director says Baltz must have done well with his idea. It funded the purchase of a 1,500-acre farm in Randolph County.

Baltz died in 1979 at the age of 90. In a July 1976 interview with the Pocahontas Star Herald, he credited his long life to having “never smoked or drank whiskey.”

Harris says the Wonder Horse display is a popular one at the museum. So many people had a horse but weren’t aware of its origin.

“They were really popular then,” Harris says. “People are finding a lot of them in their attics around here now.”