Representing the Natural State: Only Arkansas Beer and Coffee at Brews 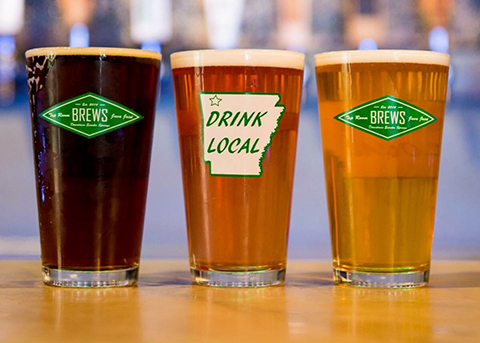 If you want to immerse yourself in an Arkansas craft beer experience, all you need to do is pop into Brews in Eureka Springs.
The establishment exclusively serves Arkansas beer and has 12 on tap every day. The taps constantly rotate and there are nine breweries represented, so it’s a merry-go-round of ales, lagers, IPAS and more.
Located at 2 Pine Street (across from the post office), the name is a clever play on another brew they offer – coffee.   Keeping with the mission to represent the Natural State, they serve Arsaga’s Coffee, a family-owned business out of Fayetteville, that roasts its own beans. Arsaga’s has been in business since 1992.

Brews was the brainchild of Katrina Pumphrey, who opened it  in October 2014. Pumphrey had an IT background, dabbled in homebrewing, and felt there was a void in the Eureka Springs market she could fill.
One of her regulars, Jim Holt, fell in love with the outfit and decided to buy it when she talked about selling it. According to Holt, Pumphrey wanted to travel and spend more time with her family.
He was retired and looking for another adventure in life.
“I loved what she developed,” Holt says.  “It was my bar, it was where I went. I wanted to make sure it stayed the same.  I like to refer to it as Eureka’s living room. Tourists like coming there because they can meet so many local people. I was somewhat concerned if she sold it, someone would change it. I wanted to keep the same concept.”

He purchased it in July 2017, after working with her for a year to learn the ropes.
“It was a wonderful transition. Most people didn’t even know it changed hands,” he says.
Previously Holt worked for Schwan’s Company and Walmart was his main account so he spent a lot of time in Bentonville and Fayetteville. He’d visit Eureka Springs on weekends and decided to retire there.
Brews also has a food menu if you get the munchies- including giant trail mix cookies to pair with your coffee. Or try it with a stout – no one will judge! 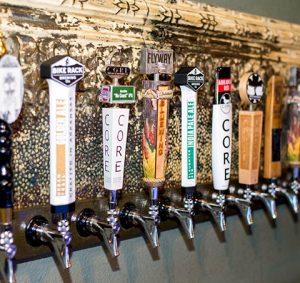 Since buying the venture, Holt has made a few tweaks and changes – mostly to the menu. He added paninis which have been very popular, especially with vegetarian customers. The kitchen is tiny so he can’t serve items like burgers, even though customers ask for those. With a background in the grocery business, he plans to continue dabbling with new menu items.
Holt also partnered with Arsaga’s to develop a blend exclusive to his business.
“Our house blend is only available at Brews. They worked so well with us, we came out with a wonderful blend. It’s pretty popular. We get emails from people who want us to ship them beans. The team did a good job,” he says. 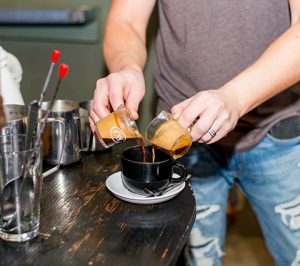 Inside, the aroma of coffee wafts through the air; giant cookies and other pastries are showcased in the display case; the list of beers are written on a chalkboard; and local/regional art adorns the walls.
John Rankine, a Canadian native and award-winning photographer who settled in Eureka Springs, organizes the shows which rotate every four to six weeks. The current show is so popular it has been extended to the end of the year. The show showcases 75 local men wearing clip-on flashy earrings and people are loving it, says Holt.
Holt is enjoying owning the business, preserving and sharing a local spot for people to gather.
“I hear a lot that the atmosphere we offer is more relaxed.  We have so many locals that hang out. I had several people say they feel like they are a part of Eureka when they come to Brews,” Holt says.