Bright the Night at the State Capitol Lighting Ceremony 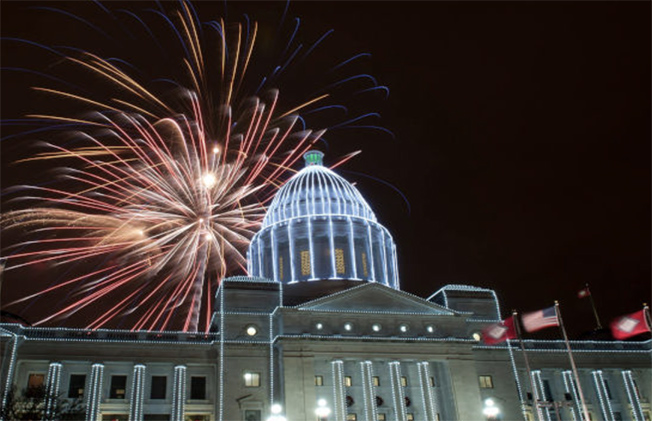 This Saturday, witness one of the highlights of the holiday season in Arkansas. That’s right – it’s time for the annual State Capitol Lighting Ceremony.

Held annually since 1938, this is the 81stiteration of this tradition, in which the whole Capitol is illuminated by Christmas lights. Join 2019’s host Arkansas Secretary of State John Thurston as he ceremonially flips the switch on the light display.

This year, the display will honor Gold Star Families – families who have lost a loved one in war. The theme ties in with the design of this year’s Capitol Christmas ornament, which incorporates the Arkansas Gold Star Families Memorial Monument.

The lighting ceremony has a unique history. It was created by former Secretary of State “Crip” Hall in 1938 as a way of lifting the spirits of the children at the Arkansas Children’s Hospital. The tradition has continued to this day, and the Capitol is illuminated so that it is visible from the hospital.

Lighting the Capitol isn’t the end of the festivities, though. (In fact, it’s not even the beginning – the Little Rock Big Jingle Jubilee Holiday Parade leads into the event.) After the lighting, there will be a fireworks display, and the public will be invited into the Capitol to see the Christmas decorations.

Inside, there will be performers, such as the Arkansas Gospel Mass Choir and several storytellers, as well as an exhibit featuring holiday-themed LEGO creations. Santa and Mrs. Claus will also be around to welcome everyone in the Capitol.

The event will be held Saturday, Dec. 7, starting at 5:30 p.m. It is free and family-friendly.