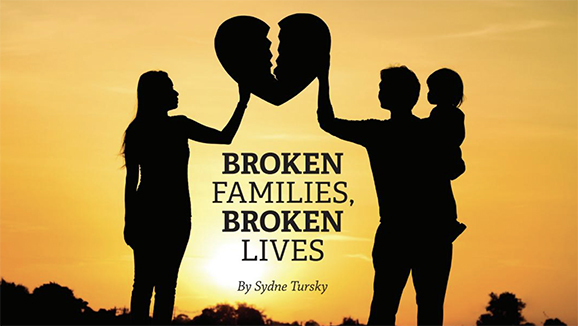 In Anna Karenina, writer Leo Tolstoy posits that “All happy families are alike; each unhappy family is unhappy in its own way.” But perhaps the quote’s popularity masks its truth; as family estrangement becomes more prevalent in society, the myriad ways that families are unhappy seem to increase unceasingly, according to Little Rock-based family counselor Rebecca Ward. Families are complex, and so are the reasons they fall apart – but regardless of why family members cut ties, mental health issues like depression, anxiety and even personality disorders are never too far behind.

Families fall apart for a vast array of different reasons, says Howard Turney, a marriage and family therapist in Little Rock. Family estrangement could stem from childhood abuse, or money that was loaned but never paid back. Sometimes parents reject their children after they come out as queer. Children may hold resentment from childhood if they feel that their parent was too strict or showed favoritism to another sibling. Family ties might break if a child marries someone who doesn’t get along with their new in-laws. Divorce, criminal behavior or the death of a family member can lead to estrangement too.

Relationships can even fail because of simple misperception; counselors call it cognitive distortion, or a misunderstanding of how others feel about a given person. A child or parent might feel that the other never really liked them, and then they feel a critical void in their life. This causes them to lash out, and can eventually lead to estrangement, Turney says.

“There’s just so many reasons, but I guess it’s just a failure of expectations and a sense of being mistreated that causes a lot of estrangements,” Ward says.

When families experience estrangement, it inevitably leads to distress. “Families of origin,” or biological families, are everyone’s earliest relationship, and the familial relationship shapes how people behave in future relationships, Turney says. When there’s something wrong with a biological family unit, everyone feels the effects.

“You’ve got a family that’s got holes in it, and everybody reacts to the holes,” Ward says. “There’s something missing, there’s tension… It’s just not normal to have a family member who has disappeared. I’ve seen several families where I ask about their siblings, and they say, ‘I have a brother but I haven’t seen him in 30 years.’ What happened? They’re not sure. ‘Oh he got mad at Daddy about something.’ Sometimes they won’t even know the reasons.”

Even when anger and resentment surrounds family estrangement, it can still be psychologically damaging to anyone who is no longer in contact with a family member. When people lose the closest relationships from their formative years, it always leaves a mark. People who experience family estrangement may develop depression or anxiety because of the lost relationship, or they might have trouble forming new relationships. They may even develop more serious personality disorders if the problem persists, Turney says.

Dealing with family estrangements is always tricky, because all families are different. For therapists, the work is to try to help them understand that there are two sides to every story, and that both people involved in the fractured relationship have to come up with some form of understanding it in a different way.

For people experiencing family estrangement, reunification with family members may not be the goal. They may just want to learn how to have healthy relationships again or move past the anger they have for their family, Turney says. No matter the goal, issues surrounding family estrangement must be dealt with so that they don’t lead to larger problems.

“Family estrangement is not something that families just accept and get over, it’s always a part of the fabric of that family,” Ward says. Though Ward deals with family estrangement often in her practice, she acknowledges that for every family she helps, “there’s probably 10 times, 100 times that many who wouldn’t think of going to counseling for it.”