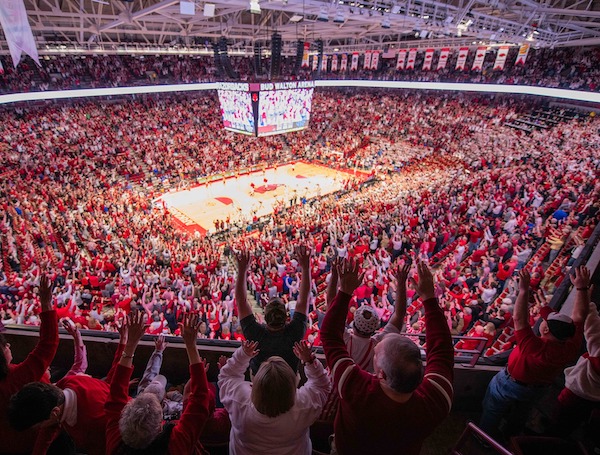 Calling all Hog fans — there is a special watch party at Bud Walton Arena Saturday for Arkansas’ Elite Eight game. The Razorbacks take on the Duke Blue Devils at 7:49 p.m. (CT), with the winner advancing to the Final Four.

The Hogs made history Thursday in the upset victory against the overall No. 1 seed Gonzaga, besting the Bulldogs 74-68. Arkansas is the first team in College Basketball history to take down a No. 1 ranked team in both the regular season and in the tournament.

Advancing to the Elite Eight for the second straight year means a match-up with Duke in what the Hogs hope is Coach K’s final game. The longtime Duke head coach has announced this will be his final season at the helm, passing the torch to assistant and former player, Jon Scheyer.

According to HogStats.com, the Razorbacks have a 2-1 all-time record vs the Blue Devils, with their last meeting being the 1994 National Championship game.

Suffice to say, it’s a big weekend for Arkansas fans. And the university is coming through with a watch party at Bud Walton Arena in Fayetteville. Doors to the arena will open at 6:30 p.m. for the 7:49 p.m. tip, and the game will be shown on the video board and TVs around the arena. According to a release, parking is encouraged for Lots 56, 56B, 60 or any lot west of Razorback Road, and no shuttle service will be provided. Attendees are being asked to use the south, west or east entrances.

For those who can’t attend, the Arkansas Razorbacks vs Duke Blue Devils Elite Eight matchup will be aired on TBS.

READ MORE: The Return of Hawgball: Under Muss, Razorback Basketball Primed to Revisit Past Glory