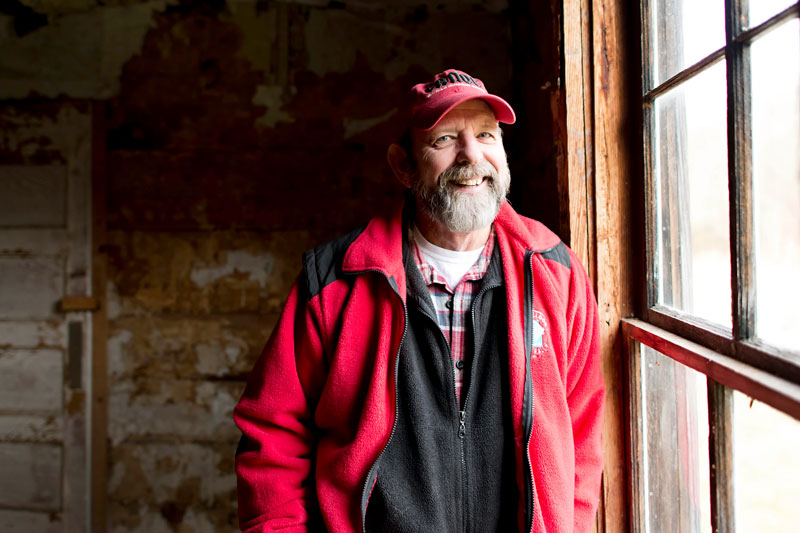 Mike Mills and his wife, Rhonda, live on the crest of a hilltop near the Newton County community of Ponca, where the view from their picture window surely must rank among the best in Arkansas. Their personal panorama takes in the Buffalo River’s legendary 500-foot-high Big Bluff and stretches eastward to mountains 25 miles away — the tree-covered highlands and hollers, a distillation of the best of the Ozarks.

It would have taken a similarly far-reaching vision, figuratively speaking, for Mike Mills to have predicted the future for Buffalo Outdoor Center when he founded his business in 1976. Starting with a few rental canoes and expanding in the 1980s with rustic cabins catering to floaters and hikers, BOC has grown steadily to encompass 22 cabins (still rustic in theme but upscale in execution), a mountaintop lodge, an RV park, a zip-line tour and a vastly larger office that includes a deli and a store selling maps, outdoor equipment, and the sorts of sundries that all weekenders occasionally forget.

Who brought the charcoal? Do we have any mustard? 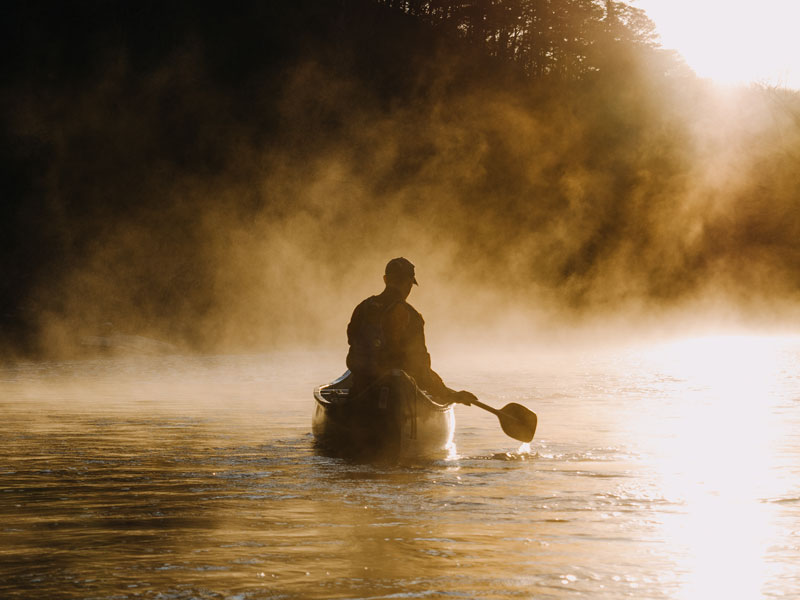 And, of course, there’s the venture that started it all: renting canoes, kayaks and rafts to visitors floating the Buffalo, the American treasure that was designated the country’s first national river in 1972. From the BOC office, it’s literally two minutes to the famed put-in site at the old Ponca low-water bridge, start of countless adventures through some of the most spectacular scenery between the Appalachians and the Rockies.

Growing up in Lowell in Northwest Arkansas, Mike Mills often went fishing with his father, and by the time he entered Hendrix College he’d floated the White River (in its pre-dammed natural state), the Osage, the War Eagle and the Buffalo, among others. His time at Hendrix coincided with the 1970s environmental boom: the first Earth Day was celebrated in 1970, “back to the land” was a mantra and every college kid had a pair of giant waffle-stomper hiking boots. At Hendrix, heading out for the weekend to do the Ponca-to-Pruitt overnight trip on the Buffalo was practically a standard part of the curriculum. Mills was the go-to guy for advice, as well as a favored paddle partner.

“I was good at it,” he says. “I’d been doing it since I was eight years old.” He also realized the Buffalo River was where he wanted to spend his life. After graduation (interrupted by service in the Marines), he worked briefly for a Ponca outfitter and guide service. In 1974, he acquired his first ten rental canoes. In 1976, he bought a former café building on Highway 43 to use as an office, and Buffalo Outdoor Center began what has been more than 40 years of steady growth.

Mills was appointed director of Arkansas Tourism in 1982, and for four years BOC took a lesser priority in his pursuits. He says now that his time in office — attending conventions around the country and seeing what other states offered to travelers — gave him “a doctorate in tourism without going to college,” he says. “I saw that I had a gold mine, if I just went back and mined the gold.”

He returned to Ponca full-time and set BOC on a slightly different path.

Offering lodging provided year-round cash flow, offsetting the seasonal nature of canoeing. “I built most of the cabins myself,” Mills says. “I laid blocks, and learned to be a roofer and a sawyer. I couldn’t afford to hire somebody else to do it. We took what we had and made it work.”

His plan, he says, was simple: “I built what I wanted to spend my vacation in.” He built “hideouts” that let visitors lose themselves in the peace of Ponca Valley. Though the first cabins were simple and inexpensive, Mills soon decided he wanted to “compete at the top, not the bottom.” He began what has been a continual process of renovations, upgrading the furnishings of existing cabins and making the newer ones more upscale from the start. Today, offerings range from small romance-themed cabins aimed at couples to larger units suitable for families. 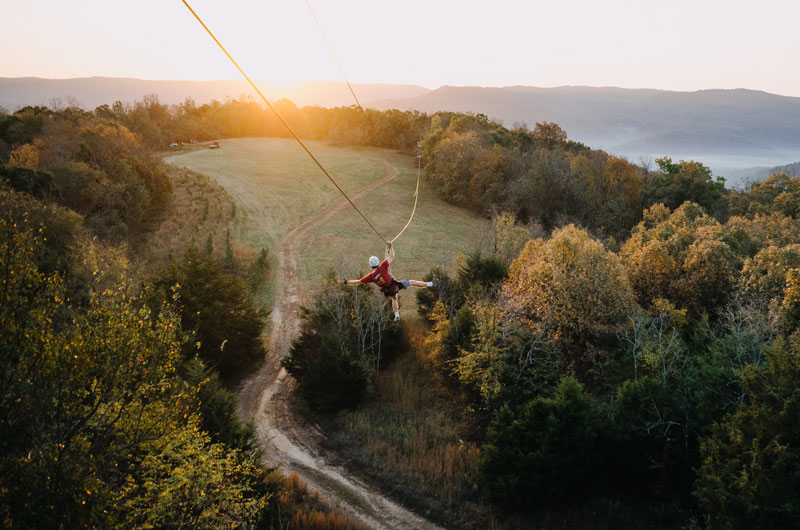 Over the years, BOC has expanded to include cabins, an RV park and even a zip-line.

In 2012, Mills built a new 5,000-square-foot office-store, more than four times larger than the original. Look around and you’ll find one of BOC’s original rental canoes on the wall, as well as the counter and stools from the first office and the first sign that stood along Highway 43. (Unfortunately, you won’t find Lemon Drop, the cockatoo that greeted visitors for years. The big white bird passed away some years ago.)

Among the newer structures at BOC, the RiverWind Lodge perches on a hillside with a view nearly as fine as that at the Millses’ house. Aimed at business retreats, weddings, family reunions and similar gatherings, it can accommodate more than 30 people, with a large kitchen, a high-tech meeting room, and a wraparound deck for relaxing and enjoying the Ozarks panorama.

Eight years ago, BOC installed Arkansas’s first zipline, an adventure that lets riders glide through the treetops for about two hours while harnessed to cables. In 2016 came an RV park with laundry and restrooms. An 18-mile, all-downhill mountain-bike trail is in the planning stages.

Mills has no desire, though, to turn BOC into an Arkansas Disneyland. “My philosophy has been to limit development. People want privacy,” he says. And despite the growth in cabins from a half-dozen to more than 20, that’s still a main attraction: hidden by trees or perched on hillsides, most of the lodging units offer views of almost nothing but nature. In many, the loudest sound in the morning may be the distant crowing of a rooster.

The BOC philosophy has paid off in a multitude of loyal fans. (Your writer confesses to being one of them, although I’m not going to tell you which cabin is my favorite. It’s already hard enough to get reservations.) One Little Rock family, for instance, has come to BOC for the Christmas holidays 25 straight years… almost. They confessed to Mills that they detoured to Aspen one year, only to realize quickly that Ponca remained their preference. 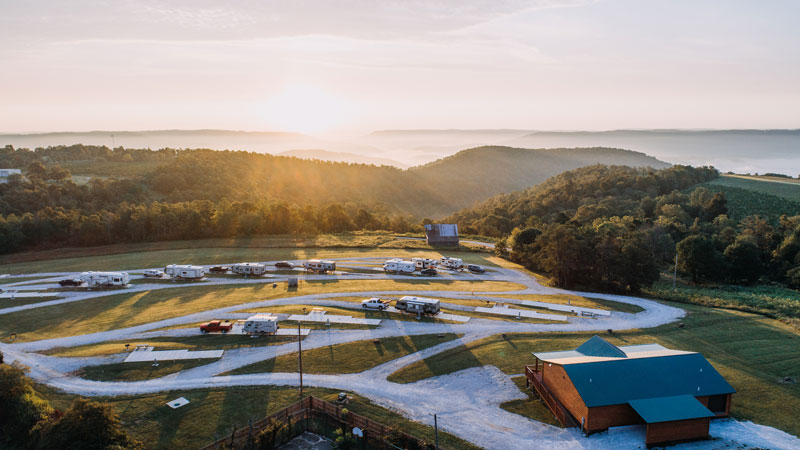 “I built what I wanted to spend my vacation in.” Most of the cabins found at BOC were built entirely by Mills.

Mike Mills credits several mentors with aiding Buffalo Outdoor Center’s success over the years, including early Buffalo River advocate Harold Hedges, who died in 2005, Arkansas advertising executive Wayne Woods, and the late Jim Gaston, whose White River fishing resort is a legend in its own right. It was Gaston, in fact, who back in the 1990s told Mills about something called the Internet, allowing Mills to grab the domain name buffaloriver.com for $20.

By the way, if you’re interested in visiting BOC you should definitely follow the company on social media platforms such as Facebook and Instagram. You’ll find out about floating conditions on the Buffalo and last-minute cabin availability, and at the very least you’ll see lots of pretty pictures. If you’re heading for the river and you’re unsure of your paddling skills, check out Mills’ instructional videos on YouTube, as well.

Despite growth at BOC over the years, the overall experience hasn’t really changed much, in large part because Ponca Valley is nearly surrounded by National Park Service and National Forest land. You can stay at a cabin here and be on a hiking trail in minutes, from the easy walk at Lost Valley to famed spots such as Hemmed-In Hollow, the Goat Trail at Big Bluff and Whitaker Point. The nearby woodlands, home to black bears, bald eagles, foxes, rare salamanders, countless wildflowers and an array of other flora and fauna, will always be protected from development. 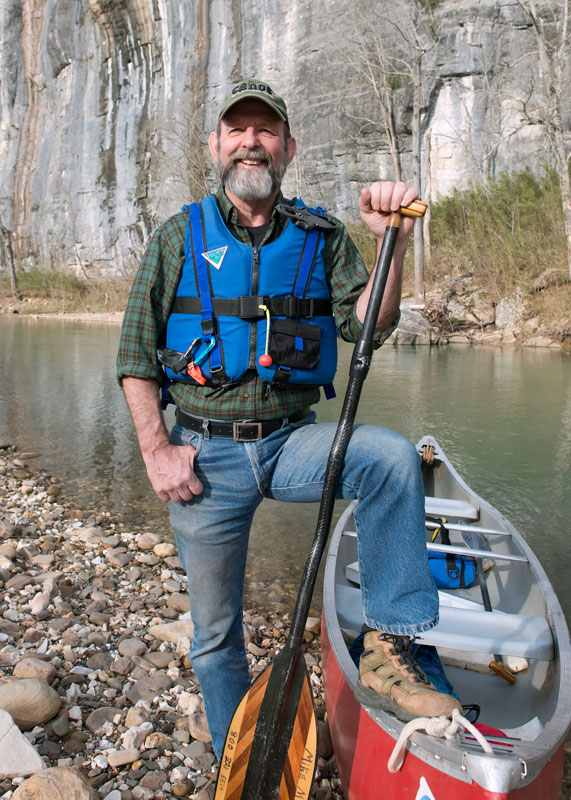 Mills is now handing the reigns of BOC over to his son-in-law.

BOC’s traditional atmosphere is owed in large part to a continuity of personnel. The operation employs around 40 people, and despite the seasonal nature of canoe rental and guiding, Mills prides himself on offering year-round positions to nearly all. His right-hand man, Steve McAdams (the Gravel-Bar General, he’s called), has been with him for 33 years, making sure the appliances work in the cabins and the canoes and kayaks are in top shape. Chief housekeeper Donna Nikkel has been at BOC 31 years.

Transition is under way for Mike Mills himself, though. After more than 40 years, he’s passing on BOC management to his son-in-law, Austin Albers, who’s now president of the company and has begun serving as company spokesperson in various venues and professional associations. (“It’s not nepotism,” Mills says. “It’s just that I’m lucky that my daughter married such a smart and capable guy who’s perfect to take over here.”) Mills still has his office at BOC headquarters, where he’s been writing his memoirs when he’s not out flying his airplane, piloting his hot-air balloon, or cruising Ozark highways in his Corvette. He plans to stay active in helping run the operation for three or four more years.

“I’m living my dream,” Mills says. “I’ve had less stress than most people in my life because I live and work in Ponca.”

As for the rest of us, we can share that relaxation by putting a canoe into the Buffalo waters at Ponca, or hiking to Big Bluff, or just sitting on a cabin porch and watching the fireflies appear at dusk. There aren’t many places in Arkansas where the natural world seems so close, and stress seems so far away.