Building a Better Tomorrow One Home/Episode At A Time 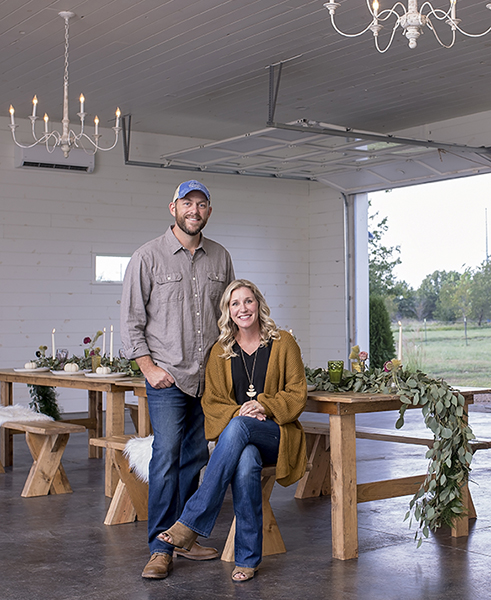 by Caleb Talley | Photography by Meredith Mashburn
When HGTV executives went searching for their next home-makeover “it couple,” they looked to Northwest Arkansas. The region’s vibrant and growing, an appreciable admixture of the historic and the contemporary. There’s hardly a better example of small-town America. And that was exactly what the network was looking for.
That’s where they found Jenny and Dave Marrs, a couple of Bentonville-based developers poised for HGTV stardom. They’re the reluctant stars of HGTV’s newest home renovation show, which is set to premier in early 2019. 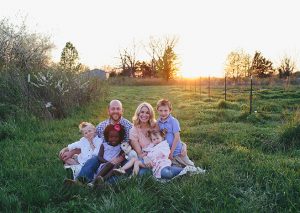 Dave and Jenny didn’t set out to be Arkansas’ cable TV ambassadors. They really didn’t set out to be developers, either. The transplants – Dave from Denver and Jenny from Orlando – met while working with the same company right out of college.
“When I graduated college, I was offered a job [in Arkansas] with Newell Rubbermaid,” says Dave from inside the newly renovated barn at their rural Bentonville berry farm.
That was in 2002. By 2003, Dave decided he would go into the business of building. He wasn’t a stranger to it; his father built log cabins in Denver for most of his life. He never anticipated getting into the business, but the corporate world wasn’t cutting it.
“We built log cabins in Colorado – my dad and I did,” he says. “I thought I didn’t want to build anymore. So, I did the corporate world for two years, which was enough. It allowed me to meet Jenny… But I just got sick of it.” 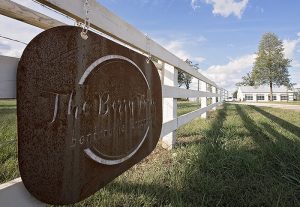 Jenny and Dave Marrs have created a rural oasis at The Berry Farm in Bentonville.

By then, the company had moved Dave from Bentonville to Chicago to Austin. When he decided to try his hand at building, he decided to move back to Northwest Arkansas, where much of his family had relocated. “When I said I’m going to start building again, Jenny took a big leap of faith and said we’ll try Arkansas for a couple of years,” he says.
And they never left.
“We were just going to be here for a couple of years and go back to Florida,” says Jenny. “I think, like a lot of people do here, we came for a stint and realized how great a place it is. This is home.”
The couple began building new homes in Bella Vista until the economic downturn of 2008. They survived the housing market crash, but transitioned to downtown and historic home renovations. That allowed the Marrs family to hit their stride. 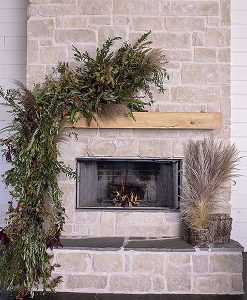 Free to a good home
One of the first old homes the Marrs family decided to restore eventually became the place where they would raise their four small children. And they got it for free.
“It was right off the [Bentonville] square,” says Dave. “The property owners came to Jenny and I and said, ‘Hey, we need to tear this down… We’re not going to use the home.’
“I think that started it all,” he adds. “We looked at it, realized it was such a cool old home, and we said, ‘What if you gave it to us, and we’ll pay to get it moved?’ They would save $15,000 to $20,000 in demolition, and I’d get a house out of the deal. They didn’t think we could get it done in the city, but we tried.”
And that’s exactly what they did. They had property off a gravel road in rural Bentonville, tucked away near small ponds and cow pastures. That’s where they would move their new project house.
“We’ve had this land for quite a while, and we didn’t really know what we were going to do with it,” says Dave. “I thought, ‘Hey, it’s a free house. We could just come out here on the weekends.’ 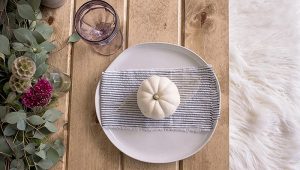 “We started that process of redoing it,” he adds. “And every time we were out here, we seemed to grow further away from the downtown life. The idea of raising our children out here had such an appeal to it. We decided to just move out here.”
According to Dave, the process was an easy one.
“Well,” Jenny dissents, cutting her husband a look. “I wouldn’t say easy.” It’s that chemistry, coupled with their down-to-earth personalities that make them so watchable.
“Okay,” Dave rebuts. “So, we took the second story off, split the house into three sections and caravanned it. The road was too narrow to bring the house down. I talked one of my neighbors into letting me go across the field. So, we went across the field until it got stuck and had a bulldozer pull us the rest of the way in and got it set on the foundation.”
Jenny adds, “I mean, it’s easy. But it was interesting.” 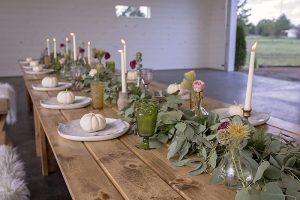 Floral arrangements at the Marrs’ Berry Farm were provided by Samantha Daniels of Kindred Blooms.

Since moving and restoring the house they now call home, the Marrs family has moved more old homes destined for demolition from downtown Bentonville to their rural hideaway and farther north to Bella Vista. One of the homes was moved next to their berry farm, and once complete, will serve as lodging for guests to their event space.
“It kind of became a theme for us,” says Dave. “Bentonville wasn’t blessed like Fayetteville and Rogers with a whole bunch of really cool historic homes. And most of the old homes in Bentonville are getting torn down for new.”
As the region continues to explode with growth, Dave and Jenny hope to preserve just a piece of its history through home restoration.
“These houses have so much character, and they’re much more unique,” Jenny says. “Houses just aren’t built the same way now… You just hate to see all these old homes get torn down, especially if we can save them.” 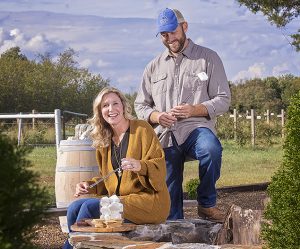 The barn at the Berry Farm features a fireplace and backyard fire pits for toasting marshmallows.

Then, HGTV came calling
“In April of 2016, one of the network executives reached out to her friends in the area,” says Jenny. “They found this area to be very unique and thought it would be a great place to have a show for HGTV. She asked for recommendations for builders, and our names got thrown in the hat.”
Dave and Jenny weren’t really interested at first. They were concerned with the amount of time it might take and how the show might represent their rural community.
“One of our biggest concerns was how the production company would portray the area,” says Dave. He and his wife were put at ease when they learned the company is from Knoxville, Tenn.
“It was a long process of back and forth, talking, developing what the show would look like and what it would be,” says Jenny. “We filmed a sizzle reel that they presented to the network.”
A “sizzle reel” is a short example of how a show might appear. Theirs was one of nearly 100 being sent in from other parts of the country, but it was the winner. The network greenlighted them for a pilot, which aired as Almost Home exactly one year ago. 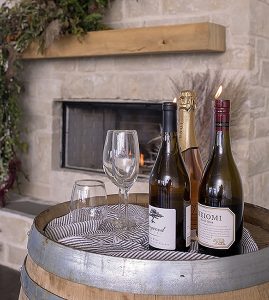 “After the pilot aired, we found out a month later that they had picked up the series,” says Jenny. “We started filming again in February, and we continued to film all the way up to October.”
After having spent nearly an entire year with the production company, Jenny says they became family to them. They let the Marrs be themselves.
“They wanted it to be natural,” Jenny says. “They wanted it to be edgy and real.”
Dave adds, “They let us just be who we are. I think our show is a little bit more edgy. It’s not all perfection. There are mistakes that happen, just like in real life. But it’s fun.”
The bigger picture
The Marrs family was reluctant to take on their own television show. They have four small children and a growing business; the thought of spending nearly every waking moment in front of a camera for months was daunting.
It was the opportunity to share what they were doing outside of work that eventually sold them.
After having gone through the arduous legal process of adopting their daughter from central Africa and having seen much suffering in the region, Dave and Jenny partnered with the North Carolina-based nonprofit Help One Now. The organization is committed to empowering and resourcing leaders in the region who care for orphans and vulnerable children.
With the help of the Marrs family, Help One Now also provided agricultural training to children and young adults. Dave and Jenny raise funds for the cause through their berry farm and adjacent event space.

Dave and Jenny are working to remodel another old home next to their Berry Farm barn.

“Dave wanted to become a farmer, and this was his idea of a farm,” she adds. In the space between the barn and their home there are sheep, some cows and a couple of chickens.
“It’s something we enjoy. We’ve been able to partner with an organization called Help One Now. Our funds from this farm, from the berry harvest and from the renovated barn that we rent out, go to fund a training farm for orphaned kiddos in Zimbabwe.”
Building is a job. This, she says, is the family’s true passion. They planted the berries four years ago as a family. They collected their first harvest last year, again, as a family. Last year was also when they finished the remodel of the berry farm barn as an events space, just in time to play host to Help One Now’s Bentonville gala.
“This is the heart of our family. Our whole family’s been involved in this,” Jenny says of their berry farm. “We all planted the berries. We’re all out here during the harvest. The whole reason we took the show was to shine a light on this. Building is one thing. But it’s just a job. This is bigger.”
The berry farm will once again play host to An Evening with Help One Now, an intimate benefit dinner. The event is scheduled to take place on Nov. 9, and proceeds from ticket and table purchases go to benefit the organization’s efforts in Zimbabwe. 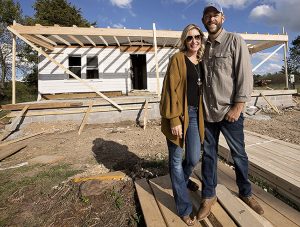 Tune in
While the Marrs family doesn’t yet know what their show will be called, they do know it will air on Mondays at 8 p.m., beginning in April. “It’ll be out on Tax Day. Get your taxes in and watch our show,” Jenny laughs.
The first season will include 10 home renovations spread across 10 episodes. Each of the homes are located in Northwest Arkansas.
“They’re all so different,” says Jenny. “They’re all older, but not all necessarily historic. They’re all completely different homes, and that’s fun. There’s no one set style. And they’re all homes people already live in.
“We’re excited for the show,” she adds. “Neither of us are from this area, but we love this area. We are invested in this area. This is a chance for other people to see what a cool place Arkansas is.”