Bumblebee Turns Fayetteville Into a Work of Art 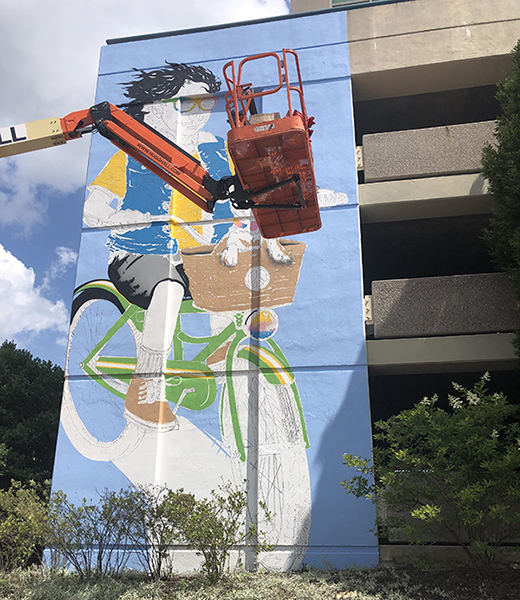 The canvas that is downtown Fayetteville is lending itself to another work of art.

Critically-acclaimed, Los-Angeles based artist Bumblebee began work this week on a three-story-tall mural on the southwest corner of the Fayetteville Town Center parking garage. The mural will be visible from both West Rock Street and South Block Avenue.

Bumblebee began sketch work on the mural on Tuesday. According to the artist’s website, Bumblebee uses the technique of stenciling and mixed media to create images of children on “unloved” walls.

“Considerate and thoughtful, Bumblebee’s work also deals with issues such as child homelessness and the impact of modernity on nature. Despite the seriousness of his subject matter, his works are not heavy. Instead, they are whimsical, playful and exude a sense of childish innocence, freedom and joy,” the website reads.

Bumblebee has completed several high-profile murals in California, including “Keep Up,” at Google headquarters in Venice Beach, “Final Cut” on the KODAK building in Hollywood and “Beach Day” in Santa Monica. He has also painted works across the globe, including murals in Sweden and Greece.

The downtown Fayetteville project was approved by the city’s Advertising and Promotion Commission in May. Monument Studio, of Bentonville, was contracted by the commission to facilitate the mural for $25,000. The funds come from the commission’s public art budget.

The new mural will add to the Northwest Arkansas community’s extensive collection of outdoor art.

“Public art makes our city more attractive to guests, who come here to experience our unique culture, which includes a vibrant arts scene. It helps draw attention to other aspects of our artistic culture,” Molly Rawn, director of the Fayetteville Visitors Bureau, said in 2018.