Burgers Worth the Hop to Lonoke’s Iconic Jackrabbit Dairy Bar 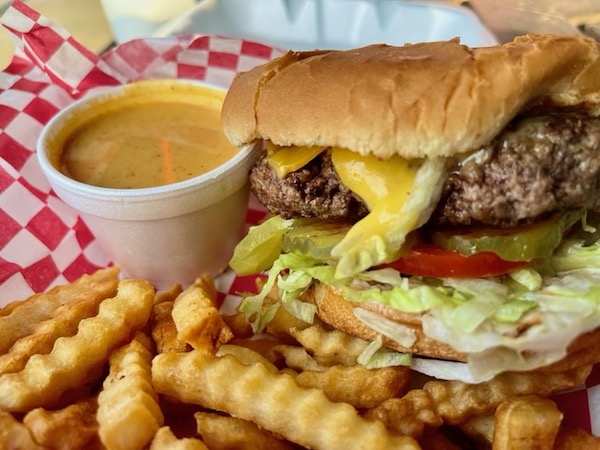 As we were dining on burgers and a vanilla milkshake at a picnic table outside Jackrabbit Dairy Bar in Lonoke, and checking another establishment off of AY’s Burger Bucket List, my husband evoked that other famous “Jack Rabbit” burgers and shakes restaurant, the one in John Travolta and Uma Thurman visit (and compete in the Jack Rabbit Slims’ Dance Contest) in Pulp Fiction. While there were no Hollywood stars, dance floors or infamous $5 milkshakes (though you can get an immense extra-large shake for $7), the Lonoke drive-up dairy bar drew many Tuesday-night customers as the after-work crowd got their orders in before the restaurant closed up shop at 7 p.m.

Know before you go: This is a cash-only establishment. No cards, no Venmo. Just good old bills printed by Uncle Sam. But if you arrive without cash, like we suddenly realized we had, never fear. Right next door is a convenience store with a highly convenient ATM. 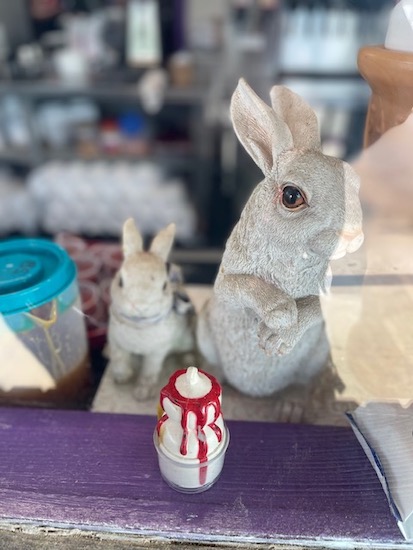 Iconic dairy bars are scattered throughout Arkansas, and Jackrabbit Dairy Bar fits right in our state’s culinary landscape. The business has been there for generations under different names, but the current name takes its inspiration from the school mascot. The owners have clearly had fun with it, as a concrete jackrabbit sits smack dab between the two order windows (they didn’t say, but it seems the sort of creature whose head you should rub for luck), and a few more decorative rabbits are visible through the window, safeguarding the caramel topping and styrofoam to-go cups as their solemn duty. And although they would be thematically appropriate, Jackrabbit has no car-hops (get it?). Order at the window, and they’ll holler for you.

We were told by our cashier that besides the burgers, the chicken finger baskets, burritos and footlong chili dogs were fan-favorite entrees. But we were there for the burgers, guided by AY’s trusty Burger Bucket List. So we ordered cheeseburger baskets, one with a regular ⅓-lb. burger, one with a jumbo 7-ounce one for contrast. We declined the upsell to double jumbo burger, despite being told it was popular since it’s “just so big,” because jumbo seemed big enough and because, being a dairy bar, there was ice cream on the menu. 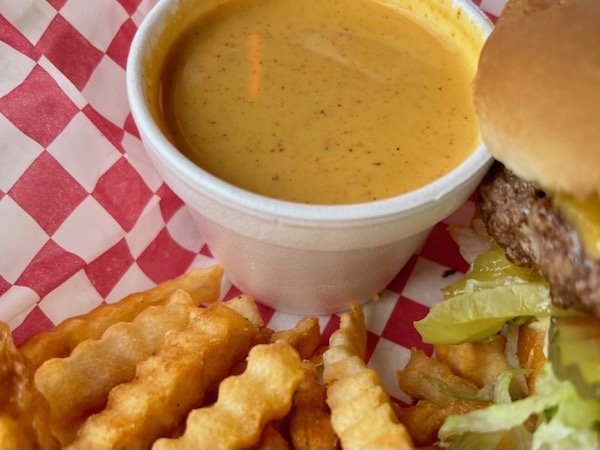 What I’d heard but forgotten until opening my styrofoam clamshell box at the nearby picnic table, is what comes in the basket. Burger, check. Hot, fresh, crinkle-cut fries (always best at drive-ins, aren’t they?), check. But when I opened the lidded container that seemed to me at first a curiously large vessel for ketchup, I suddenly remembered. Cheese dip! This place is also known for its cheese dip and fries.

Jackrabbit proudly uses Velveeta in the cheese dip and on the burgers (and likely on other items we did not order). The tasty, velvety dip is somewhere between two Arkansas staples: homemade Velveeta-and-Rotel and the spiced cheese dip at Mexico Chiquito. It was smoother than the Rotel dip and a bit less cumin-y than Mexico Chiquito’s, but still with a pleasing-yet-not-overwhelming chili-powder flavor. I thought it was great on the fries, though my mister gave the dip a pass.

Our burgers were like the old favorites you might have grown up on. Nothing fancy, no crazy French cheeses or truffle-sautéed shiitake mushrooms. No, this is a well-done, dairy bar burger on a sesame-seed bun, wrapped in red-and-white paper to absorb the grease and make it holdable with minimum mess, keeping those toppings all tucked in. One curiosity to note at Jackrabbit: there are condiment rules. Hamburgers come with mustard and the rest of the fixings. But cheeseburgers come with mayo instead of mustard. If you want anything different, be sure to speak up. The cashier had no explanation for this law-of-the-Jackrabbit-universe. 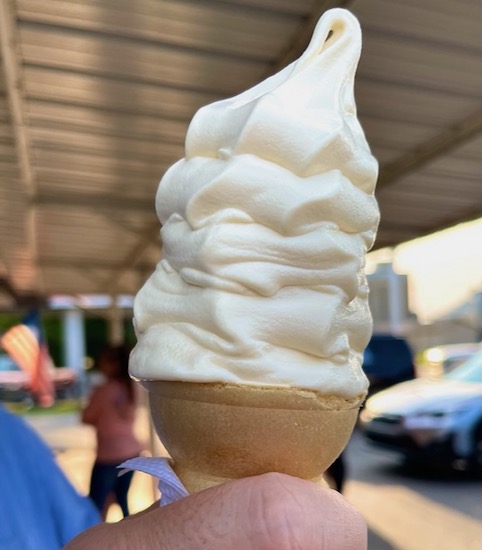 We rounded out the meal with a vanilla shake, which tasted like they’d added extra vanilla (or maybe they always come extra-vanilla-ey), and a simple cake cone of soft-serve. The regular cone is plenty large. The large-size cone, which we saw a local order, is a feat of engineering.

If you find yourself hungry for a quick meal in Lonoke, or thereabouts on I-40 (the dairy bar is about a minute or so from the interstate), stop in at the Jackrabbit Dairy Bar. Or maybe hop.