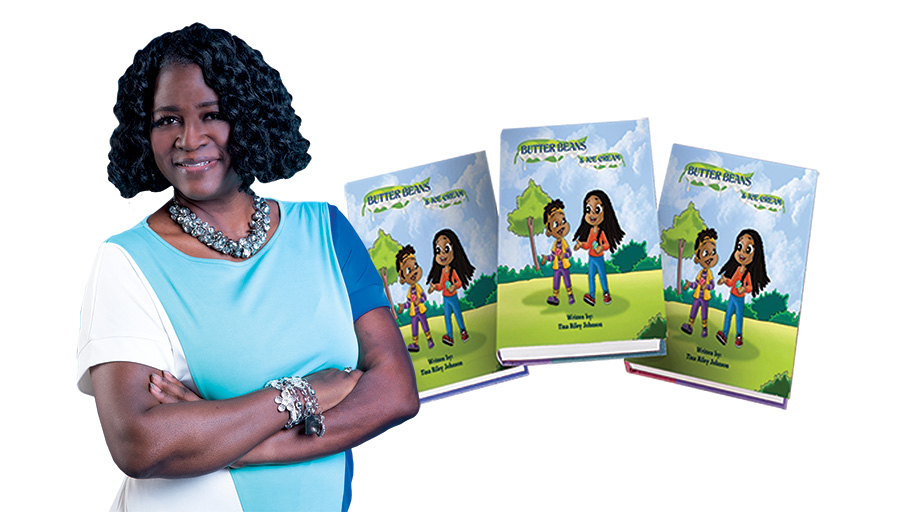 After decades as an educator, Tina Johnson is ready for her next endeavor — children’s book author.

There was a stand-off in Philly. The Riley family of Wilmar, Arkansas, had gone to Pennsylvania to visit relatives. Everything was going great. Until it wasn’t. Two females were squared off over a dinner table. This issue wasn’t going to just be pushed to the side. Firmly, Christene Riley insisted. And just as firmly, her 5-year-old daughter, Tina, resisted. She wanted ice cream. But what stood between her and that ice cream wasn’t just her mother. It was what was on her plate.

The ice cream might have been a little melted around the edges by the time Tina saw her way through the forkfuls of beans, but she did. The ice cream came and went. And those beans? Well, they were kind of good after all, one of those you-just-got-to-swallow-hard-and-try-it kinds of things. Butter beans and ice cream — who could know back then that the firm love of a mother would leave her daughter with a lesson that she packed up and took with her long after she had left Philadelphia.

Tina Riley Johnson, now a wife, mother and grandmother, explains, “The moral of the story was just because something doesn’t look like what you think it’s supposed to, don’t knock it till you try it. It could be something you really like. Then, you’ll have your reward.”

In her childhood household, Johnson learned a lot more about handling kids. After all, she was the only girl in a family of eight boys. Not only that, but she was smack dab in the middle — four boys older than her and four born after her. The latter, she says, “became like my own because they were younger.” Life was busy with the boys, family, school and church. But through it all, she was sticking to her plan of being a movie star in Hollywood.

She ended up married and in McGehee. Her head had been saying Hollywood, but her heart was having the final word. That job she got there in the school district as a pre-K paraprofessional confirmed it — she was born to work with children. Whether she was living in Wilmar, McGehee or subsequently Little Rock and then Bryant, Johnson was — and is — a Pied Piper to the little ones. Even now, she says, going into a grocery store often means ending up with a child wrapped around her, much to the astonishment of their parents.

“They come to me. They’re drawn to me. It just melts my heart. They see something in me that I don’t see in myself,”  Johnson says.

Now there are decades of children who have found the specialness in Johnson. From her start as a pre-K paraprofessional, Tina segued into being a physical education teacher and then became a Certified Child Development Associate. Children who were around her not only got hugs but books. The requests came, “Mrs. Johnson, I want a book. Can I have one?” And the answer was always, “Yes,” even if it was out of her own pocket.

She taught them all: “Readers make achievers.”

Before her own babies had even been born, she read to them. It worked. Her kids proved to be a lot more excited about getting their very first library cards than she had been about butter beans. Whether it was at school, the library or church, Johnson was reading to the kids. As one fellow educator said to her, “That’s one thing I know you can do — read. The kids are just in awe when you read.” The wannabe actress had found her stage, immersing herself into the characters as she read, delighting her young fan club.

Those first kids in McGehee are all grown up now. So are her own. It was becoming time to think about what she would do next. After she had closed her final classroom door, Johnson and her husband, Dartanion, moved on down the road to Bryant. After she had joined a new church there, one of the ladies who was also a member came up to her with a message.

“God told me to tell you what are you waiting for? The baby has already been born. It involves children and a school bus,” the woman said.

That was all well and good, but whatever did it mean? That part wasn’t clear to Tina at all. That is, until one day when she was working on her computer. And there it was — filed right where she had put it all those years ago. Yes, she had written it, typed it up, and then saved it: her children’s book, the one she wrote based on that long-ago day in Philadelphia … about butter beans and ice cream. What now? What was she supposed to do with this?

Back to church. Again, she got a divine nudge. Someone knew someone who was with Living Waters, a Christian bookstore and publisher in Little Rock. Would Johnson be willing to let this person read her work? It was a big, fat YES! The book that had been germinating for a lifetime was now about to take on what is mach speed in the literary world. In less than a year, it has been edited, illustrated, put on preorder and now on release. It is not only the first children’s book for her, but also a first for Living Waters.

“It just went from there,” Johnson says. “It started flourishing; everything started coming together.”

Those who know her are literally going to see some familiar faces on the cover. There’s Johnson herself with two special people in her life. Pictures of her two grandchildren, Cam and Caleb, were given to the illustrator. The results were a happy surprise for her.

“It’s amazing — they look like my grandkids, even though they are cartoons.”

The book, Butter Beans and Ice Cream, has remained close to the basics of that day in Philly. There is a mother — her mother still, she says — but two children this time, with her granddaughter Cam representing her younger self. And who could leave out Caleb?

The message she learned that day has remained but further deepened, as has her spirituality in the years since then. “Everything might not be peaches and cream, but God is with you always, even to the end, she says. “He is with you, so you can always expect the reward.”

The message is rippling out further and further. The preorder numbers are reflecting the success that is coming as the book officially launches. Soon, Johnson expects to be back in some classrooms, reading and signing books just like a movie star writer. Will there be more books for her to read? Oh yes, indeed.

“I have so many ideas in my head,” she says. “Just so many books I want to write for children.

“I just have a heart for my babies. I just want to see them all do well and thrive in life.”

And so, now in a different but wonderful and rewarding way, Tina Riley Johnson — books in hand — is going forth to serve her babies. But they better not even think about skipping the butter beans for the ice cream.

READ MORE: From the Ward to the Word: Oncology Nurse Pens Children’s Book