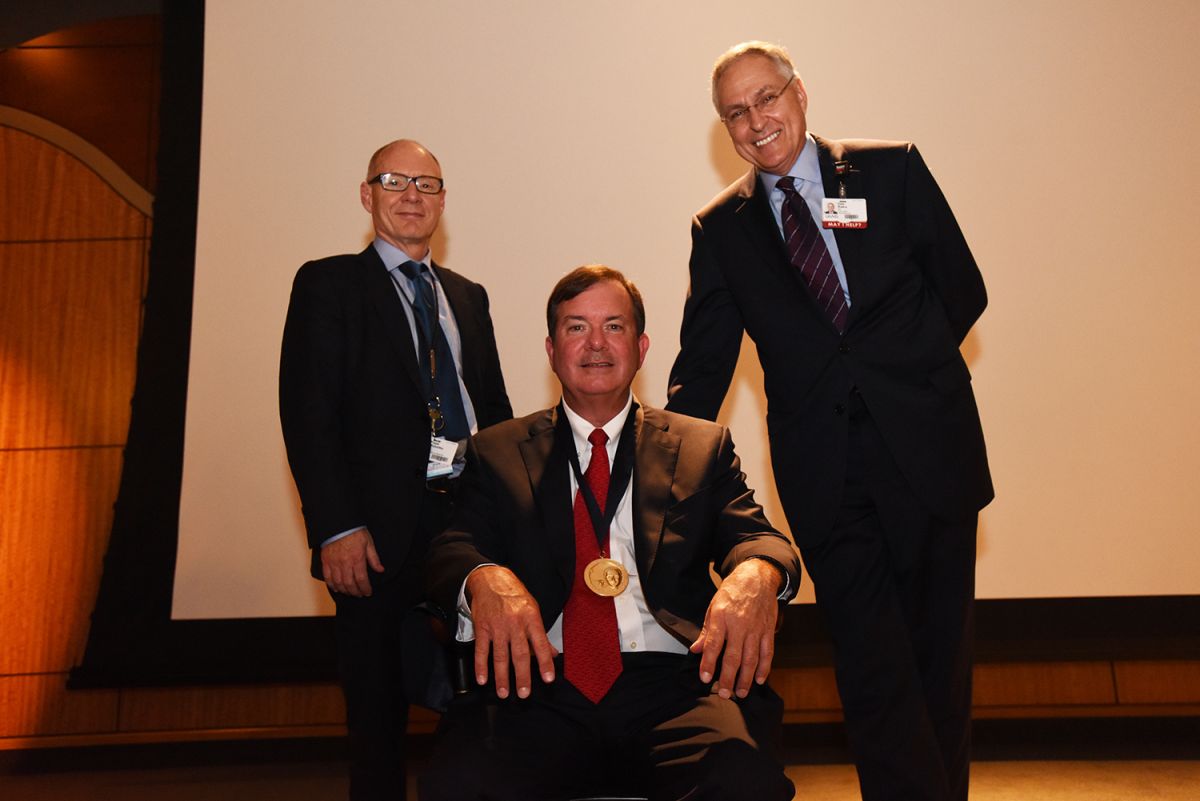 Barnes, who graduated with honors from the College of Medicine in 1986 and completed his internship and residency in orthopaedic surgery at UAMS, has served as department chair since August 2014.

An endowed chair is among the highest academic honors a university can bestow on a faculty member. A distinguished chair is established with gifts of at least $1.5 million, which are invested and the interest proceeds used to support the educational, research and clinical activities of the chair holder. Those named to a chair are among the most highly regarded scientists, physicians and professors in their fields.

The chair is named in honor of Carl L. Nelson, M.D., a world-renowned expert in joint replacement who served as chairman of the UAMS Department of Orthopaedic Surgery from 1974 until his death in 2005. He oversaw the education of 122 orthopaedic surgeons, many of whom stayed in Arkansas to practice, including Barnes.

Barnes is one of Arkansas’ and the region’s foremost joint replacement experts. He holds four patents for orthopaedic surgery devices and has designed numerous hip and knee implants. He lectures nationally and internationally on total joint replacement surgery and has been active in hip and knee research. Barnes established the HipKnee Arkansas Foundation to further study patients with arthritis.

“Dr. Barnes’ journey to this leadership position at his alma mater, in his hometown is unique, a bit circuitous and one that we’re delighted about,” said G. Richard Smith, M.D., former dean of the College of Medicine who helped recruit Barnes to UAMS and the department chair position. “During those 18 months, I formed a deep friendship with Lowry and a true respect for who he is, a person of character and integrity.”

Tom S. Butler, retired vice chancellor for Administration and Governmental Affairs at UAMS and a former patient of Barnes, said in the care he received from Barnes he was most impressed with Barnes and his staff’s concern for the patient beyond the procedure.

“That’s the kind of training you want your physician to have,” said Butler. “To see the patient in total.”

A special guest was lifelong friend Kevin L. Garvin, M.D., who is now chair of the Department of Orthopaedic Surgery and Rehabilitation at the University of Nebraska Medical Center. Garvin met Barnes as a fourth-year resident at UAMS while Barnes completed his internship.

“Dr. Barnes has a passion to lead this department to new heights,” said Garvin. “The relationships he’s established will serve this department well as he continues to recruit the best and brightest faculty, staff and residents to grow the program.”

Barnes has published extensively and is on the editorial boards of peer-reviewed publications including the Journal of Arthroplasty and Clinical Orthopaedics and Related Research. Barnes is known nationally for his expertise in health care quality and efficiency.

Barnes is a member of the prestigious Knee Society, an exclusive organization of the world’s experts in orthopaedic surgery. He is the only Arkansas member since Nelson’s death.

Nelson came to UAMS in 1974 to develop the Department of Orthopaedic Surgery and organize the orthopaedic training program. He produced more than 200 peer-reviewed scientific publications on topics including orthopaedic education, musculoskeletal infection, psychomotor skills and bloodless surgery.

“I was very lucky to have been educated by Dr. Nelson,” said Barnes.

UAMS is the state’s only comprehensive academic health center, with colleges of Medicine, Nursing, Pharmacy, Health Professions and Public Health; a graduate school; a hospital; a northwest Arkansas regional campus; a statewide network of regional centers; and seven institutes: the Winthrop P. Rockefeller Cancer Institute, the Jackson T. Stephens Spine & Neurosciences Institute, the Myeloma Institute, the Harvey & Bernice Jones Eye Institute, the Psychiatric Research Institute, the Donald W. Reynolds Institute on Aging and the Translational Research Institute. It is the only adult Level 1 trauma center in the state. UAMS has 3,021 students, 789 medical residents and five dental residents. It is the state’s largest public employer with more than 10,000 employees, including about 1,000 physicians and other professionals who provide care to patients at UAMS, Arkansas Children’s Hospital, the VA Medical Center and UAMS regional centers throughout the state. Visit www.uams.edu or www.uamshealth.com. Find us on Facebook, Twitter, YouTube or Instagram.

Wellness Wednesday: Coping with Grief and Loss
May 5, 2021
Go to Top
Never Miss An Issue!