Perched on an eye-catching limestone bluff overlooking the White River in north central Arkansas, Calico Rock can claim one of the prettiest settings of any city in the state. Yet this quaint Izard County community isn’t often on the tip of the tongue when Arkansans are asked to name their favorite hill country towns, with such places as Eureka Springs, Jasper, Mountain View and Hardy usually dominating the conversation. Following my latest visit, I’m convinced it’s time for Calico Rock to be included in the mix.
Famed explorer Henry Rowe Schoolcraft canoed past Calico Rock in January of 1819 – just short of 200 years ago and only weeks before formation of the Arkansaw Territory – and made note of the bluff in his journal:
“It is one of those rare and fanciful works of nature which are seldom met with, and is approached under circumstances well calculated to heighten the effect of a scene in itself very striking and picturesque. It is a lofty smooth wall of stratified lime-stone rock, presenting a diversity of colour in squares, stripes, spots, or angles, all confusedly mixed and arranged according to the inimitable pencil of nature, and hence its name.” 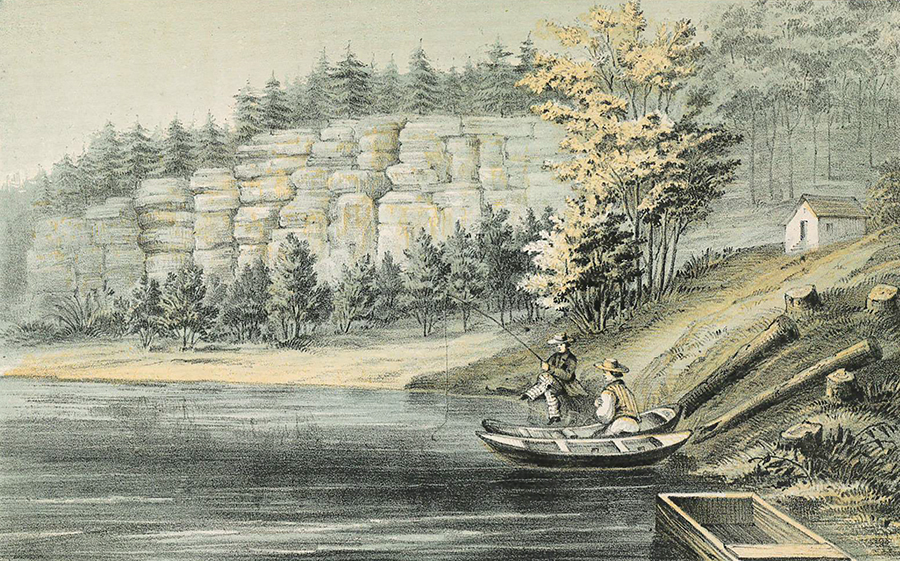 Soon after Schoolcraft floated beyond the base of this prominent landmark, the pioneers who followed built primitive huts in the area, many of them settling along Calico Creek. This small stream splits the bluff, and its mouth provided a handy landing site for keelboats, flatboats, and eventually steam-powered paddleboats. In fact, during its early days the community was known as Calico Landing. Steamboats, which couldn’t navigate further upstream because of the White River’s shoals, brought the mail and delivered supplies – furniture, blankets, salt, flour, coffee, shoes, clothing and tools – for the town’s merchants and also for those businesses serving the nearby communities of Pineville, Wild Cherry and Newburg. Returning downstream, the boats carried passengers, mail, bales of cotton, timber, produce and pelts from wild game.
Calico Rock’s first post office appeared in 1851, only to close a year later, and it wasn’t until 1879 that a post office opened for good. The intervening years – with the Civil War, jayhawkers, bushwhackers, Reconstruction and the occasional flood or tornado – were difficult for the community and so was a big fire that consumed the business district in 1898. What turned things around for Calico Rock was arrival of the St. Louis and Iron Mountain Railway in 1902, although a spark from a passing locomotive in 1923 resulted in another conflagration that in two hours destroyed almost all of the commercial enterprises.
Most of the buildings constructed to replace the burned-out businesses were of stone or concrete – and, nearly a century later, it’s this collection of structures, recognized as the Calico Rock Historic District in 1985, that gives the town much of its character. A photographer’s delight, the vernacular architecture is a pleasant reminder of far simpler times.

Add the Printing Press Café & Ice Cream Parlor to your list of things to do when visiting historic Calico Rock. Photo by Mark Green.

A good place to begin an experience in this charming town is at the Calico Rock Museum and Visitor Center (104 Main Street), aptly housed in two of the city’s oldest surviving buildings. Open daily (except Sundays), it provides a fine introduction to Calico Rock’s colorful past via a series of fascinating exhibits and also hosts an attractive gift shop. In addition, the staff operates the Printing Press Café & Ice Cream Parlor (Tuesday – Sunday; 11 a.m. to 2 p.m.) in the old newspaper office a couple of doors to the north. And directly across the street is the Calico Rock Art Center (Wednesday – Saturday) and its galleries featuring the work of local artists along with pieces by Louis Tiffany, Dale Chihuly and Thomas Hart Benton.

Up from the White River, Calico Rock’s historic district covered the Main Street. The district was listed on the National Register of Historic Places in 1985. Photo courtesy of Arkansas Department of Parks and Tourism.

One of the most surprising elements in town is the East Calico Rock Historic District, also known as Peppersauce Alley (“peppersauce” being the preferred term for moonshine many years ago). Situated across Calico Creek and a couple of blocks east of the Main Street Historic District, it’s an intriguing assortment of derelict buildings dating from the early to mid-20th century. Two dozen or so interpretive displays explain the background and history of each site. Although the ruins are all privately held, they offer splendid photo opps. Make sure to check out the old city jail, a decidedly uncomfortable 10’ x 12’ cell, with these stenciled words still readable on the wall: “$5 Fine for Talking to Prisoners.”
For those considering a trip to Calico Rock, let me remind you that it’s set in an especially attractive region of the state. Mountain View, Blanchard Springs Caverns, the epic-rated Syllamo Mountain Biking Trail and the Ozark Folk Center State Park are only a few miles to the south. Not too far to the north you’ll find the iconic Jacob Wolf house in the town of Norfork and beyond are Mountain Home and lakes Norfork and Bull Shoals. The Buffalo National River and the Ozark National Forest’s Leatherwood Creek Wilderness area are located a short distance to the west. And, of course, there’s world-class trout fishing on the White River virtually within the city limits. A fine assortment of lodging options is available at arkansas.com and on the Airbnb and VRBO websites.

Located directly on the White River in Izard County, Calico Rock has grown from a steamboat landing to a historic town full of appeal for visitors of all ages. Photo courtesy of Arkansas Department of Parks and Tourism.

A third-generation Calico Rockian (or is it Calico Rocker?), Mayor Ronnie Guthrie has been a fixture in City Hall for 20 years now and is strongly considering a run for a sixth term. “It’s a good job,” he says, although he occasionally gets the odd complaint. One elderly constituent, for instance, called him late one night at home, insisting that a recent water main project was causing her toilet to overflow. At midnight Mayor Guthrie, accompanied by his wife, arrived at the address in question and adjusted the float on the commode’s tank, fixing the problem. On another evening he was asked to dispatch what appeared to be a rapid skunk and honored his voter’s request. “Good, friendly people live in this town,” says the mayor, and he’s one of them. Likewise, he’s a staunch supporter of efforts to recognize and celebrate Calico Rock’s heritage. As a result, one of the galleries in the Art Center has been named in Mayor Guthrie’s honor.
In the interests of full disclosure, it should be mentioned that the original geologic formation which captivated Schoolcraft two centuries ago has been altered. When the railroad was built, construction crews blasted away tens of thousands of tons of rock from the bluff to make room for the tracks. Yet the town still stands tall overlooking the beautiful White River valley. And there’s not another Calico Rock in the entire country.