Calling the Hogs All Over the World 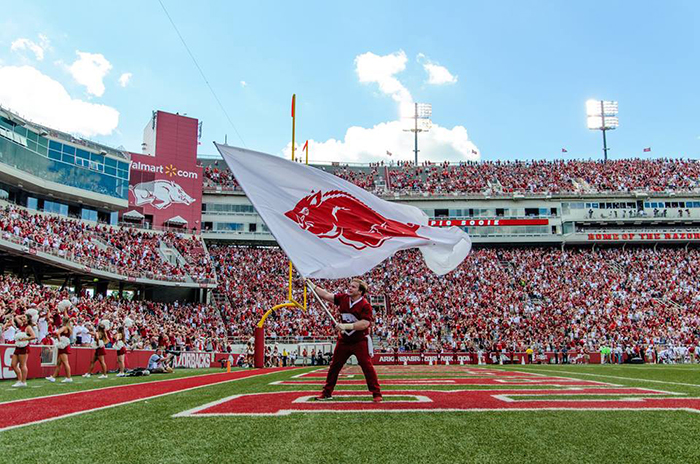 This month, Razorbacks fans will become one as they “call the hogs” in unison.

During the second annual ONE Hog Call, Razorback fans will join together at free public events in Fayetteville and Little Rock to spread school spirit and ring in the 2019 football season. The ONE Hog Call event will be held Friday, August 30, at 1 p.m.

The Fayetteville Hog Call will be held at the Fayetteville Town Center Plaza, located at 15 West Mountain Street, and fans will get to Call the Hogs with Razorback football players. University of Arkansas students, faculty and staff can participate in an on-campus Hog Call at the Greek Theatre, which will include Razorback coaches, mascots and the spirit squads. These events begin at 12:15 p.m.

Starting at 12:15 pm, Central Arkansas fans can gather at War Memorial Stadium to Call the Hogs.

In addition to events in Fayetteville and Little Rock, fans are encouraged to organize gatherings around the world to express their school pride and participate in the Hog Call.

“Last August, fans from all over the world – in 40-plus U.S. states, 16 foreign countries and beyond – dropped what they were doing and called the Hogs in unison to kick off the new year and show support for all Razorback student-athletes,” Vice Chancellor and Director of Athletics Hunter Yurachek said in a statement. “The event marked the most widespread, simultaneous Hog Call in history. As we look forward to the second annual ONE Hog Call event, I invite Arkansans and Razorback fans everywhere to once again come together in support of our student-athletes and to celebrate one of the most unique and passionate traditions in college sports.”