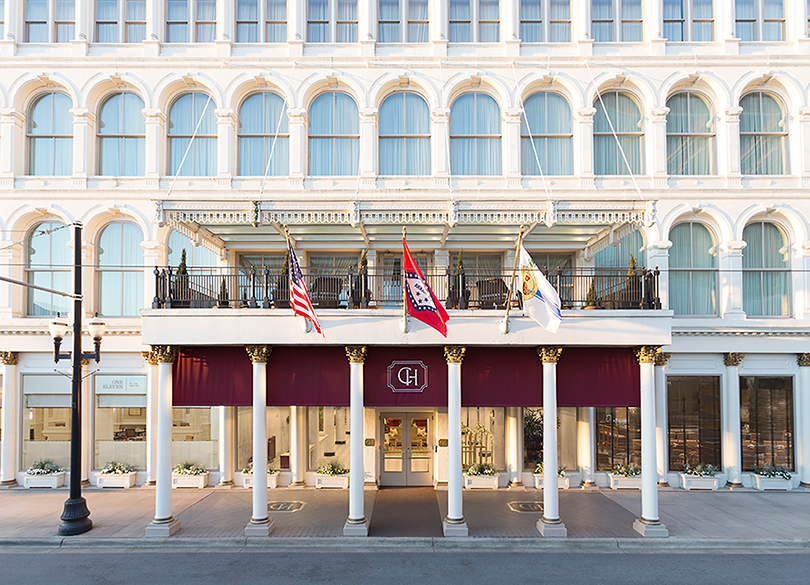 Little Rock’s very own Capital Hotel was recently named the most historic in the state for a timeless getaway by MSN. The breathtaking hotel is no stranger to national recognition, however, and it’s effortless to see why.
“Following the 2005 to 2007 transformation, the Capital offers the rare-found comfort and convenience of a world-class luxury hotel without compromising the character earned through 140 years of service,” says Chuck Magill, marketing director of The Capital Hotel.
“Because the services of a modern hotel could never have been imagined so long ago, saving a hotel of this antiquity requires an investment that is far greater than new construction. For this reason, most hotels of this era fell to the wrecking ball.”
Some of the hotel’s most noteworthy features include a stunning stained glass ceiling, a unique cast-iron façade and colonnades that surround the two-story lobby. The colonnades were created using an ancient technique called scagliola, Magill says, which combines marble dust, gypsum and a special glue that provides the marble appearance and hardness. The lobby’s tile floor is also original.
“The building’s exterior actually involves four generations of architectural detail, indistinguishable to the casual observer, but readily evident upon closer examination,” he says.
The hotel has received recognition on national, regional and local levels, especially following the 2005-2007 transformation.

Magill says their favorite recognition is having the Capital listed on TripAdvisor as one of the Top 25 Luxury Hotels in the country, thanks to steady guest compliments.
The historic hotel also houses two restaurants — One Eleven and Capital Bar & Grill — each with their own unique flavors and charms.
A favorite at One Eleven is the Capital Soul Plate, a brunch dish which consists of mixed greens simmered with bacon, orange soda, beer and hot sauce. It is served with smoked gouda mac and cheese with mushrooms, and truffled chicken tenders. Another favorite is the Seared Diver Scallops with shiitake mushrooms, potato gnocchi and lemon beurre blanc.

One Eleven was also recently included in the America’s 100 Best Wine Restaurants of 2018 list by Wine Enthusiast.

The Capital Bar & Grill is known for its famous spiced pecans, and house-made pimento cheese. The Debutante is their best-selling cocktail.
“While recognition is always welcome, it brings appropriate national attention to a remarkable hotel that is easily overlooked in a tertiary travel market,”Magill says.
By Kayla BaughJuly 11, 2018
Share this post
Share on FacebookShare on Facebook TweetShare on Twitter Pin itShare on Pinterest Share on LinkedInShare on LinkedIn Share on WhatsAppShare on WhatsApp