Casey Martin Drafted by Phillies in Third Round 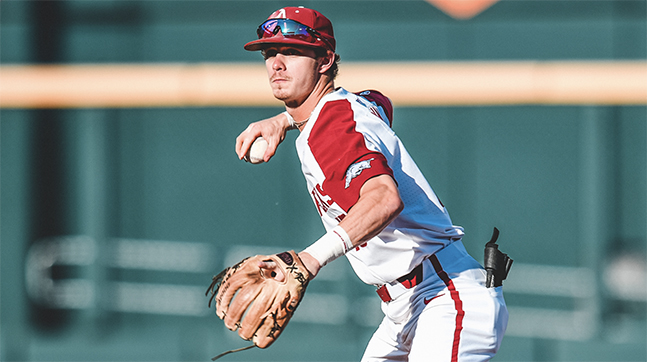 Another Razorback baseball player has been snapped up by the big leagues.

Casey Martin has been chosen by the Philadelphia Phillies in the third round of the 2020 Major League Baseball (MLB) Draft. Martin is the 87th overall pick in the draft.

He is the second Razorback to be chosen this year, following Heston Kjerstad, who was chosen as the second-overall pick by the Baltimore Orioles.

A Lonoke native, Martin has played infielder for Coach Dave Van Horn’s squad. He distinguished himself as a freshman, getting named to the All-SEC Second Team and the SEC All-Freshman Team. He was also named a NCBWA First Team Freshman All-Americanand and Collegiate Baseball Freshman All-American.

During his sophomore year, he hit .286 with 15 homers and 57 runs-batted-in and a career-high 21 doubles. He played his junior year during the COVID-19-shorted 2020 season, in which he was rated the no. 3 shortstop in the D1 Baseball’s Preseason Position Power Rankings.