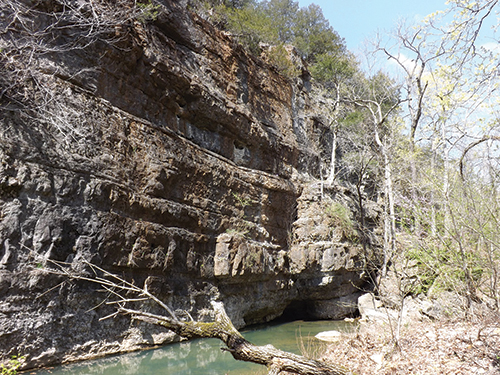 Long before there were benchmark exams, school funding formulas or even the Arkansas Department of Education, there was a cave.

Snug in the canyons that lined the spring-fed Hall’s Creek in what is now western Randolph County is a small cavern that served as a school in the early 1800s — before Arkansas had even received statehood. Settlers of the area envisioned the school and five springs discovered in the canyons that locals claimed healed various ailments would create a bustling boomtown, much like what Hot Springs became more than a century later.

The area, near what is now Ravenden Springs, was remote and wild, full of brush at the eastern foothills of the Ozark Mountains at the beginning of the 19th century. But small communities began popping up as farmers migrated to Arkansas from Kentucky, Tennessee and North Carolina.

Hix’s Ferry to the east became a vital spot for crossing the Current River. The Columbia, Walnut Hill, Kingsville and Fourche de Thomas communities began to grow as more settlers moved in. The children who lived there needed education, and Caleb Lindsey, a Baptist minister who moved to the area around 1815, soon found the cave while exploring the creek.

In 1817, the “School Cave” opened with a handful of children learning Bible lessons, reading, writing and arithmetic. 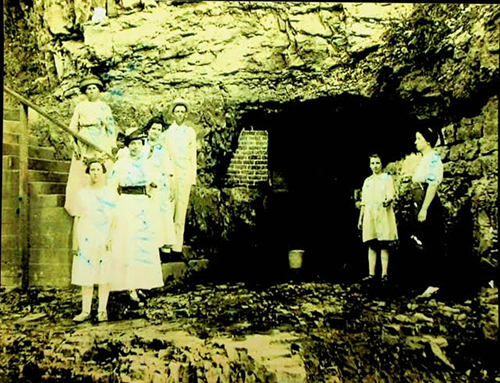 “There wasn’t much of an appetite for education at first back then,” says Rodney Harris, an associate professor of history at Williams Baptist University in Walnut Ridge. “There was no state funding. There were no school buildings. They used kerosene to heat the cave.”

There were no classroom records kept then; Harris thought Lindsey may have charged for lessons to help pay for the needed school supplies.

“Education was typical for those who were better off,” Harris says. “There was no territorial money, no taxes. Arkansas wasn’t granted statehood for nearly 20 years. I’m almost certain he had to charge for the school.”

Classes may not have been held every semester, Harris adds, if there were not enough students to warrant holding school in the cave.

Because the cave was at the bottom of the canyon, getting there required scaling down rocky bluffs. A century and a half later, Arkansas State University’s ROTC teams would conduct rappelling training down some of the more sheer cliffs.

Locals built a series of steps leading to the cave to make the trek easier. 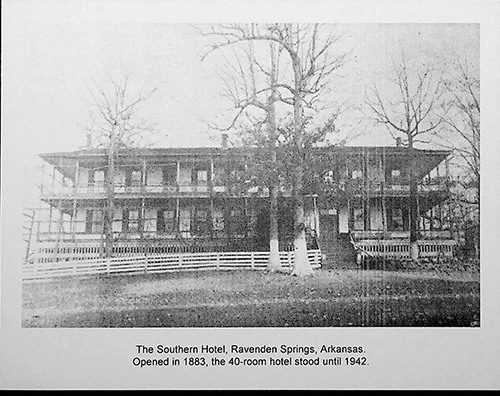 Harris says students could have stayed at nearby farms during the week rather than travel back to their homes because of the distance. He pondered if some students may have slept in the cave to avoid climbing back up the bluff and making the long journey home.

History records do show that B.J. Wiley, Randolph County’s first clerk and third county judge, taught in the cave in the early 1830s. He was paid, Lawrence Dalton wrote in the book History of Randolph County, with farm produce, furs and a place to stay at a local resident’s home. Records also indicate others held classes in the “School Cave” during the Civil War time of the 1860s.

The cave’s entrance was about 12 feet high by 15 feet wide. A photograph in the History of Randolph County shows locals standing proudly at the cave’s mouth. A wooden staircase spans from the entrance to the top of the bluff.

Today, a concrete wall built in the late 1940s keeps visitors from going inside.

Along with the school, Lindsey also founded the first Baptist church in the state when he began one in Columbia. Not to be outdone, his cousin, Eli, became the first Methodist church “circuit rider” in the state, visiting churches from the Ravenden Springs area into Independence County.

The school was one catalyst for continued growth.

A good marketing plan was another. The town of Ravenden Springs, named for the thousands of ravens Methodist minister William Bailey saw in a rocky den near the town, was founded in 1880.

Bailey has a reoccurring dream of descending to the bottom of the canyon near the school and drinking from a spring. In the dream, which he said he had for three consecutive nights, the crystal clear waters healed his stomach ailments. Bailey actually made his way to the spring one day, repeated his actions from the dream and said he was soon cured of his stomach issues.

Four other springs, locals claimed and promoted, also had healing properties. In addition to the Stomach Spring, there was the Eye Spring, Arthritis Spring, Kidney Spring and Heart Spring.

Word spread, and Ravenden Springs gained the nickname, “The Dream Town.” Soon, people traveled from as far as St. Louis and Chicago to drink from the springs.

Railroad captain R.D. Welch was so impressed with the springs and the locals’ claims, he built a 40-room hotel above the canyon in 1883. The hotel remained for 60 years, but once the newness of the springs wore off, the town size dwindled and never became the thriving area Welch and others had hoped for.

The area was hilly and woodsy which limited further expansion. Other than the hotel, the springs, the cave and hiking trails through the rough terrain, there wasn’t anything else.

“They couldn’t add golf courses or more hotels, like Hot Springs did later,” Harris says. “Prior to the 1940s, you had to travel from Jonesboro to Ravenden Springs to stay in a hotel. After World War II, the horizons broadened. Transportation became better, and areas like St. Louis and Kansas City were [more easily] accessible.”

The Depression also hampered potential growth. By the late 1940s, the hotel closed and was eventually torn down for its lumber.

Locals still visited the springs and the cave, swimming in the rushing waters and hiking along its trails.

Gary Gazaway, a Pocahontas musician whose great-great-uncle was Lindsey, says he remembers hiking and seeing Needle’s Eye, a crack in the canyon wall large enough for people to climb inside and scale to the top of the bluff.

“We’d go out there to go swimming when I was a child,” says Gazaway, who plays trumpet and has toured with musicians such as Joe Cocker, Phish and the late Stevie Ray Vaughan. “We’d hike through the trails. It was a great place.”

His daughter, Lindsey, is named after the Lindsey family line.

Landowners Sandra and Louis Decker donated 33 acres to the Arkansas Natural Heritage Commission on Feb. 14, 2019. The commission, which is an agency of the Arkansas Department of Parks, Heritage and Tourism (ADPHT), will manage the tract of land called the Hall’s Creek Canyon Natural Area for conservation, says Stacy Hurst, ADPHT secretary and a state historic preservation officer.

The steep canyons are rare for the area, which usually has less rugged and more gently rolling hills, Hurst says. It is also the only known site in the state for the wall-rue spleenwort, a rare fern of vertical cliff faces.

The commission had planned to create walking trails at the natural area but has yet to find funds to build the system, says Ruthie Berryhill, commission education and information coordinator.