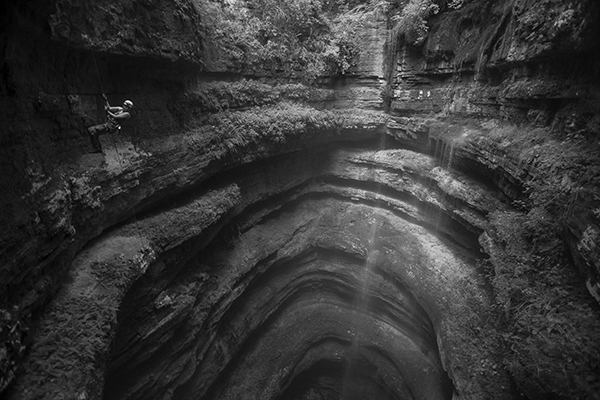 Michael Ray Taylor probably won’t appreciate a description of him as a Renaissance Man. But this 61-year-old professor at Henderson State University in Arkadelphia, chair of the Communications and Theatre Arts Department, is a solid candidate for this rare title. He studied under acclaimed poet/writer James Dickey at the University of South Carolina. He’s produced five books (one of which is The Cat Manual), has had articles published in Sports Illustrated, Audubon, Outside, Reader’s Digest and The New York Times, and has traveled the world extensively. He speaks passable Spanish and can order beer in Mandarin. He’s worked on documentary films for National Geographic, PBS and the Discovery Channel, and he has even co-authored technical papers with scientists from NASA. He and his wife Kathy have raised three fine sons. And he’s spent a full year of his life underground.

“Underground” is a keyword in the life and times of Professor Taylor. Mike, as he prefers to be called, is arguably the country’s foremost writer on caving. His interest in the subterranean world can be traced back to a family vacation through the Great Smoky Mountains when he was 6. Giving in to his son’s badgering, his dad allowed them to visit Ruby Falls, a commercial cave near Chattanooga, Tenn. Taylor could hardly believe his eyes, finding the exotic formations and twisting passages so vastly different from the countryside surrounding their eastern Florida home.

“I recall stepping from the hot sunshine into a cool darkness unlike any space I had ever entered,” he writes. “Ceilings stretched out of sight overhead. Stone walls seemed something from a medieval castle. The colors were strange and otherworldly.” Later trips took the family to Mammoth Cave in Kentucky and to Carlsbad Caverns in New Mexico. He was hooked. 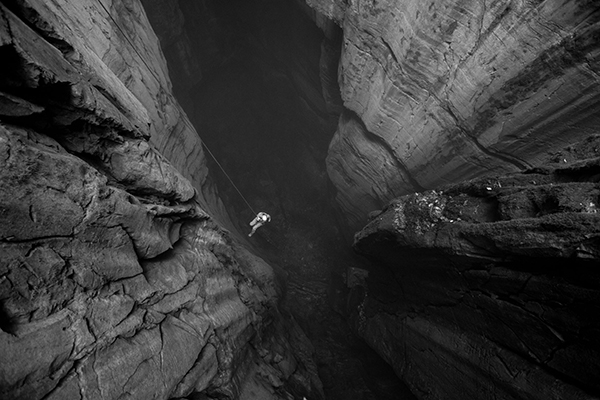 While attending Florida State University, Taylor fell in with other students who shared his interest, exploring caverns in northern Florida and venturing up into the cave-rich region where Tennessee, Alabama and Georgia converge (known by the TAG acronym to serious cavers). Halfway through law school, Taylor made a midcourse correction and switched schools to pursue an advanced degree in creative writing. Dickey, his mentor at the University of South Carolina and himself an admirer of caves, encouraged Taylor to pursue his enchantment with the underground world.

He did just that, signing up for major caving expeditions, writing riveting accounts and selling his words to various publications. In 1988, he participated in the initial American caving excursion to China, a joint undertaking involving the Cave Research Foundation and National Geographic magazine. Three years later, he returned, and, with funding from Smithsonian magazine, he and his colleagues and hosts mapped miles of previously unexplored passages in remote parts of the country. Other assignments took him to Mexico, Jamaica, Greece, Italy and the Czech Republic. Taylor has explored caves in 40 of the 50 states — not bad when you realize several states are caveless. The latest count indicates he’s been in more than 300 caves since his first visit to Ruby Falls.

When asked how many hours he’s spent in these dark recesses of the Earth, there’s a long pause, and one can imagine the cogs turning as he ponders the question. “I have spent,” he finally answers, “a year of my life underground.”

Some of that time’s been devoted to explorations here in the Natural State, mostly in the Ozarks. But he’s also put in a bunch of hours belowground in downtown Hot Springs, scurrying through the drainage tunnels running beneath Central Avenue. Working with scientists from NASA interested in extreme environments, Taylor collected mineral deposits from the thermal springs. One result of the year-long project is that the park’s interpretive exhibits in the visitor center had to be revised. The water isn’t 100 percent pure as originally thought but contains several unusual microbes (not harmful to humans) that thrive in the springs’ hot waters. 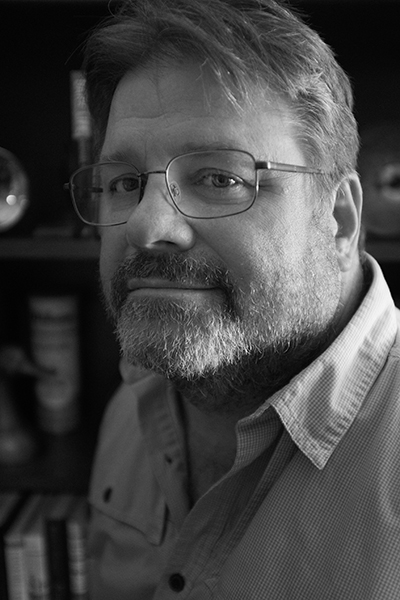 Taylor’s first book, Cave Passages, was released in 1995. It is, as he wrote in the preface, “the story of a hidden realm of delicate beauty, of a wilderness that deserves our understanding and our protection, of a surprising universe that lies just beneath the surface of the world.” Published in 1999, his next book, Dark Life, takes a look at the ongoing quest to discover life both deep underground and in distant space. The National Geographic Society published his third book, Caves: Exploring Hidden Realms, in 2001. This coffee-table-sized volume, a companion to the IMAX film, Journey into Amazing Caves, is the “story of those caves, of a few of the people who dared to explore them, and of the scientific discoveries and remarkable images brought to the Earth’s surface of these unseen subterranean worlds.” The photos are stunning, equally matched by Taylor’s vivid descriptions of the risks and rewards encountered by these modern-day explorers.

His most recent book, published earlier this year by Vanderbilt University Press, is titled Hidden Nature: Wild Southern Caves. Written in his easy-to-read style, it’s the captivating story of a rich underground wilderness and the wonderful assortment of characters who feel compelled to push through the vast unexplored depths of the region.

When asked if folks who have absolutely no desire to go caving would be interested in his latest book, Taylor responds, “There is something in it that will relate to your natural world. Nature is fascinating. You can vicariously enjoy many of the thrills of discovery in Hidden Nature.”

For Taylor, that introduction to Ruby Falls many, many years ago was a life-changing experience. For one thing, he’s made dozens of friends across the globe. “Cavers are a very eclectic bunch,” he says, “even odd on occasion. Sometimes you’re putting your life in the hands of these friends. They’re very self-reliant, often with a bit of swagger. Caving is a great equalizer. When you’re all covered in mud, everybody’s the same.” 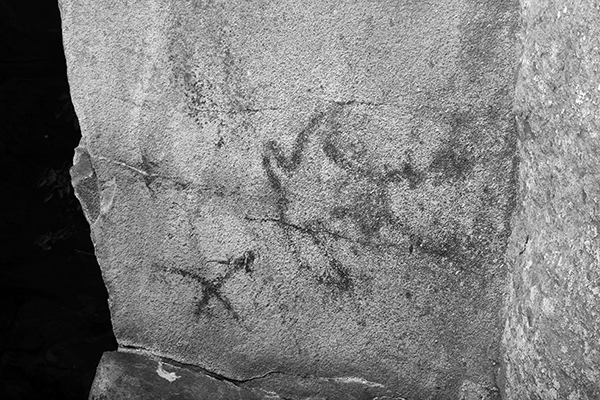 A stumbled-upon pictograph under the earth.

Caving helps him fulfill a sense of adventure. “It’s about exploration,” he says. “It’s that chance to see something no other human in history has seen.”

He’s also found that his many hours underground have given him time to reflect. “Caves are a great place to ponder life, death and aging.” Those subterranean hours have also imparted an important lesson: “What’s happening beneath the surface of Earth is often an indicator of the health of our planet.”

Now in his 60s, Taylor doesn’t spend as much time underground as he did in his earlier days. “That young guy in those photos isn’t as skinny as he once was,” he says, adding that his knees aren’t as forgiving. Yet, he plans to honor invitations to go caving in England and Switzerland when he can fit those trips into his busy schedule. He’s enthusiastic about a cave documentary he and some Henderson State University students have been working on, a project they’ll restart once the pandemic situation settles down. In addition, he hopes to pursue some television opportunities in the near future to stimulate the public’s interest in and appreciation for caves. And with the encouragement of some of his Henderson colleagues, Taylor is also well into the draft of a novel, an effort he’s returned to after a long hiatus. It’s a thriller involving the oil industry and — you guessed it — caves.

For folks interested in exploring the underground, check out the “If You Want to Go Caving” chapter near the end of Hidden Nature. Taylor also notes that several of the commercial caves in Arkansas offer exciting “wild cave tours,” far removed from the paved paths, electric lights and troupes of tourists. For additional information, he suggests that potential cavers spend some time at the www.caves.org website.

Taylor is especially appreciative of the administration and his fellow instructors at Henderson. His bosses have encouraged him to go out and continue perfecting his chosen craft of journalism — that is to research firsthand and write about his experiences. This approach, he says, keeps him on his toes and allows him to be a more effective instructor. Although he does most of his caving during the summer when he’s not teaching, his colleagues have graciously stepped in and covered his classes on those rare occasions when a unique opportunity arose.

Taylor is also a big fan of Arkadelphia. When he and his wife first moved to the community more than 30 years ago, they assumed their stay would be short-lived, never imagining it would become home.

“This is a small, peaceful town where everybody knows everybody,” he says. And when the next invitation arrives for him to participate in another major spelaean exploration, “the Little Rock airport’s only an hour away.”

Now, about The Cat Manual book. Taylor says his family has always had cats and enjoys their antics. When a feline pet would do something strange or unexpected, one of the boys would shrug and invariably say, “That’s in the cat manual.” At some point, his sons suggested that he actually write a book with that title. Noting one of his colleague’s success with an e-book, Taylor opted to do the same, using humor to explain typical cat behavior — things like avoiding trips to the vet, bringing in their prey, dealing with thunderstorms and techniques for waking up humans, all written from a cat’s point of view. Available on Kindle, The Cat Manual has proven popular enough with cat fanciers that Taylor is getting a monthly royalty check — no surprise, given that it’s been downloaded more than 75,000 times. And it’s also available as an audiobook, with Taylor providing the narration.