By Mel White | Photography by Jamison Mosley
EST. 1970
The country’s most beloved seasoning, made with an ancient Greek formula, has called the Arkansas Ozarks home since 1969.
A few years ago, a California computer programmer named Jan Koum famously stated that he wanted “to do one thing and do it well.” That thing was a new messaging service, and Koum did it well enough that in 2014 he sold WhatsApp to Facebook for $19.3 billion.
Harrison, Arkansas, is a long way from Silicon Valley, but a small company on the west side of town has been successful for nearly 50 years by following that same philosophy. S-C Seasoning Company makes one product: Cavender’s Greek Seasoning. And over time, the secret blend of spices in that red and yellow tube has gained a devoted and enthusiastic following among chefs across the United State and Canada, who use it on everything from meat to green beans to hushpuppies.
“We have the best group of customers in the world,” says Cara Cavender Wohlgemuth. “They’re constantly calling here or writing us letters or putting things on our social media. ‘Have you ever tried this on popcorn?’ ‘I put it on eggs.’ Or, ‘I won a barbecue contest and it was in my recipe.’”
It was Cara’s grandfather, Spike Cavender, who founded the company in the late 1960s, in the process creating not just a seasoning but an entrepreneurial legend in Arkansas. He enlisted his family to help blend spices on his porch, originally in a washtub and later in a cement mixer, giving away the first batches to friends. Later, when S-C evolved into a real business, he spent countless hours behind the wheel, selling his product to mom-and-pop groceries and roadside diners throughout the south-central states.
Cara and her sister Lisa tagged along on some of those trips, seeing Spike’s sales techniques up close.
“Granddaddy was just such an outgoing personality,” Lisa says. Not only did he convince retailers to carry his product, he went straight to consumers, too. “If we went into a restaurant, he would leave an open can on the table.” People tried the new seasoning, asked for more, and told their friends. Before long, grocery stores were calling Spike and asking him to bring more of his special blend.
“That was something Granddaddy was really proud of, was word-of-mouth advertising,” Lisa says, “because he definitely didn’t spend any money on advertising in the beginning.”

Cavender’s storefront in Harrison. The Cavender family once mixed their famous seasoning in a cement mixer. Jake, one of the company’s longest surviving customers, has witnessed all of Cavender’s automation.

“He was really efficient with his funds,” Cara says, to which Lisa adds, “Yeah, he didn’t have any excess funds.”
As an illustration, Lisa tells of how Spike learned when stores around Harrison received their shipments, so he could ask for their empty boxes. “Spike would get in a truck and go around and pick up these boxes,” she says. “And that’s how he shipped his product in the beginning.”
Spike passed away in 1992, by which time his son Steve had taken on leadership of the company. Since Steve’s death in 2008, S-C Seasonings has been in the hands of Lisa, Cara and Cara’s husband, Lance Wohlgemuth. It was a smooth transition, because all three principals had been working in the family business for more than a decade.
“When we first came back here in 1994, Dad was pretty adamant that we all work a rotation in different areas, and over the course of 23 years, we’ve dabbled in everything,” Lisa says. “We all work really well together. We each bring something different to the table, and yet we can pinch-hit for each other if somebody needs to be gone.”
Cara and Lisa spend most of their time in the front offices of the Cavender’s facility in Harrison’s industrial park, while Lance generally oversees the blending and packing operations in the back, which, by the way, must be one of the nicest-smelling manufacturing plants this side of perfumeries in the south of France.
A “fun fact,” as Cara describes it, involves Spike Cavender’s original blend of spices. When he was perfecting his product, Colonel Sanders of Kentucky Fried Chicken was ubiquitous on television commercials, touting his “secret recipe of 11 different herbs and spices.”
“Spike wanted more, so Cavender’s has 13 ingredients,” Cara says. “It still has five secret ingredients.” 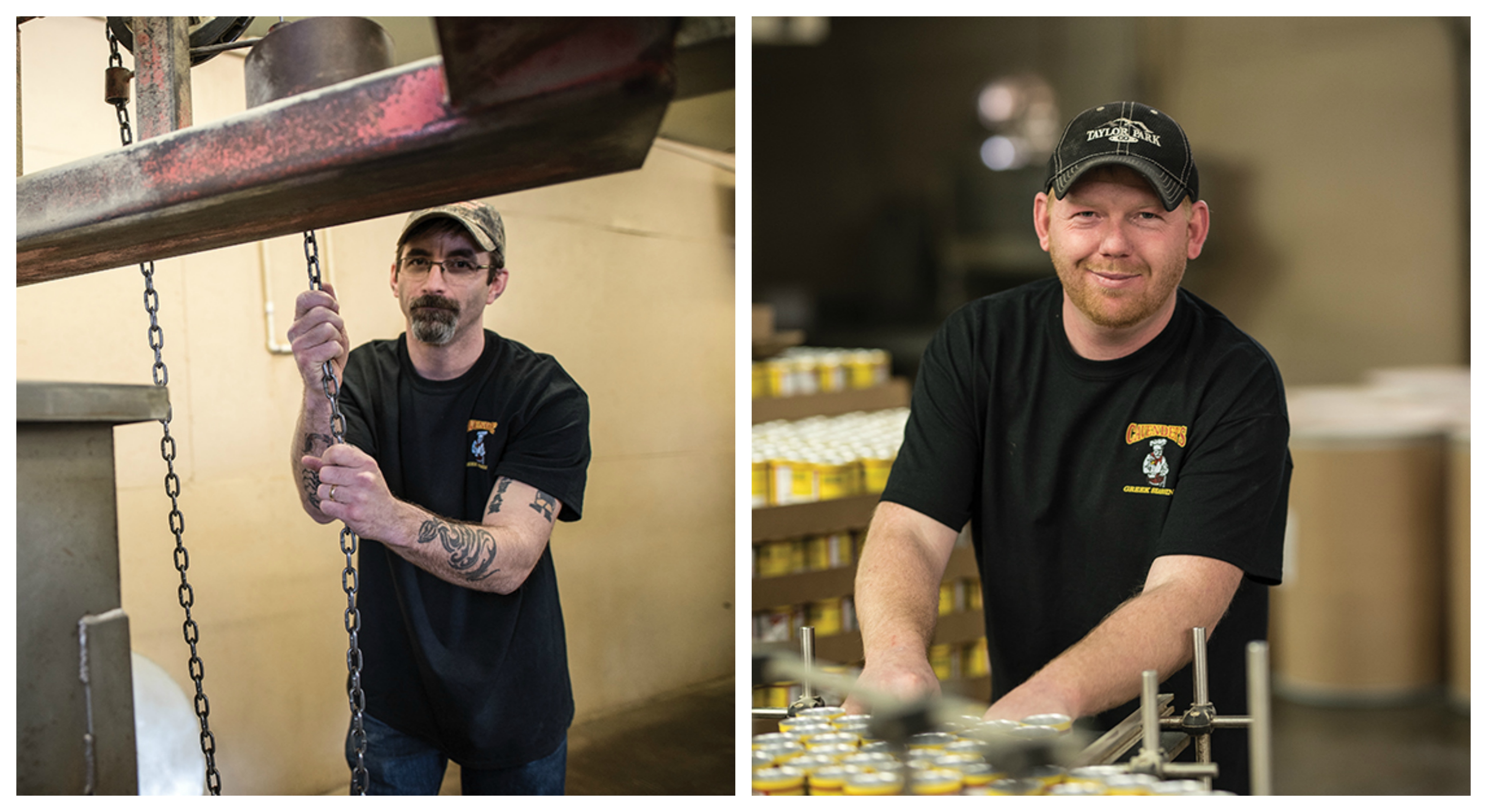 “We all work really well together. We each bring something different to the table.”

Although some of the Cavender’s recipe is confidential, it’s no secret that the major components are salt, black pepper, garlic and oregano. Lance keeps up with spice prices the way a Wall Street broker watches oil futures.
“Pepper is the most volatile, as far as pricing,” he says. “Since I’ve been here, we’ve seen it anywhere from $5.20 a pound down to $1.10. There’s two crops a year, one in the spring and one in the fall, so around that time you’ve got to start looking at buying it. We try to figure out what we’re going to need for a year, close to the harvest date, and we’ll book so many thousand pounds at a time. We’ve got to hit the time and the poundage. Oregano and garlic aren’t nearly as volatile.”
Ingredients for Cavender’s Greek Seasoning arrive on trucks from wholesalers and warehouses, to be blended in bulk in a refrigerator-sized hopper. From there, the product is loaded into one of three machines, one each for the 8-ounce and 3.25-ounce tubes and another for the 5-pound tubs.
“We’ll blend three to five tons a day,” Lance says. “But we still package and inspect every piece of our product by hand. There’s nothing that leaves here damaged or not 100-percent right.”
In response to customer requests, in 1991 Cavender’s added a variety with no salt or MSG. In addition, they occasionally prepare a special run with different packaging for the Canadian market, where all labels have to be in French as well as English.
The question arises: How, after all these years, has Cavender’s managed to grow while avoiding being kidnapped by a conglomerate, some predatory Kraft or Unilever or General Mills?
“We’ve had inquiries, wanting to buy us,” Cara says. “But we really like what we do. We like the fact that we’re a small, family-owned manufacturing business.
“We have only nine employees, and three of them are us,” she says, referring to herself, her husband and her sister. “But the main thing is that we’ve got super employees, really long-term loyal employees, and that’s what it’s all about. You can’t have a successful business and not have that.”
Cavender’s has also avoided the common pitfall of overextending itself financially, the fatal mistake of so many enterprises. 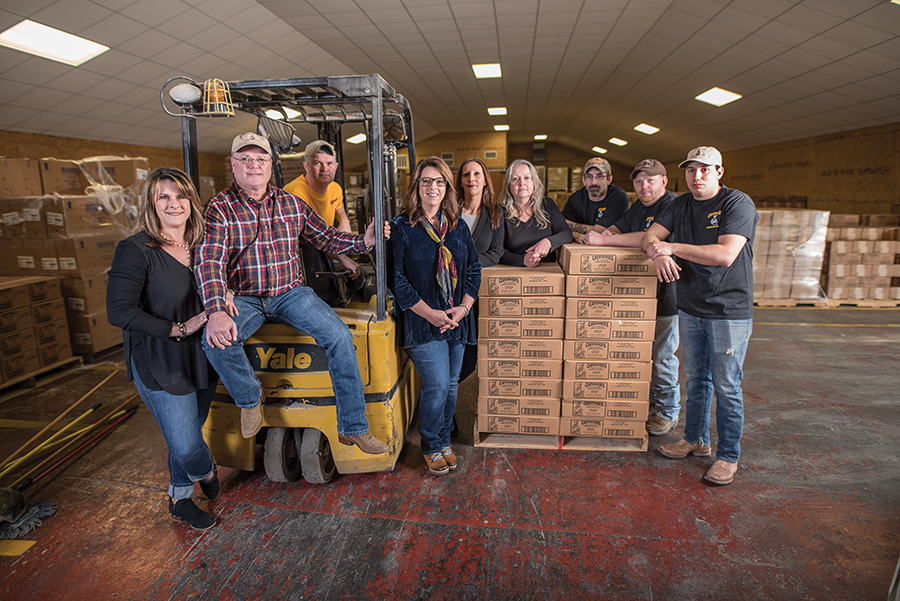 “We’ve got super employees. Really long-term loyal employees… You can’t have a successful business and not have that.”