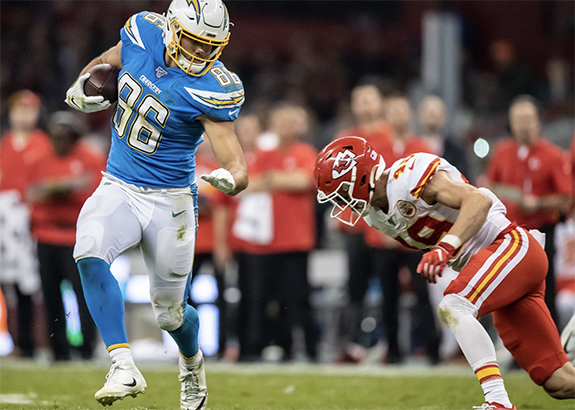 The Los Angeles Chargers may not have a top-flight quarterback, but they do have an elite tight end. This week, they paid him like it, too.

The Chargers made former Arkansas star Hunter Henry the highest-paid NFL tight end by paying him just over $10 million dollars for 2020.

Henry missed all of 2018 with an ACL injury and had a scare last season when he missed four games with a tibia plateau fracture in his left knee. However, he rebounded in a major way, catching 55 passes for 652 yards and five touchdowns.

Reportedly, both sides want a long-term deal to keep Henry in a Chargers uniform for many years. The current negotiating window ends in mid-July. A deal could be done before the season or later. In any case, Henry is locked in for next season, which the Chargers are banking on (literally) being his best as a pro.

Despite the injuries, Los Angeles management has seen enough of Henry to know they need to keep him. Last season’s strong performance was proof that he is tough and has grown in experience even after missing all of 2018. Henry has also showed that unlike some tight ends, he bolsters the run game with monster blocks but also has the finesse to be a high-level pass catcher. Both of those qualities have shown through and gave the Chargers all the reason they needed to bank up the Brinks Truck to Henry’s front door.

However, I would say, and I bet the Chargers brass does too, that Henry’s biggest asset may be his character. His talent has never been questioned since he emerged as a top-flight college prospect as a sophomore at Pulaski Academy in Little Rock. But, the fact that he has high morals and a tireless work ethic, only makes his athletic ability all that more attractive. There are plenty of players who would not have been ready to play after two tough injuries. Last summer, I heard Henry speak at the All Arkansas Preps banquet, and it was pretty apparent that he wasn’t going to let anything stop him in 2019, and he didn’t. Not every player could weather that storm, but Henry’s faith and determination is as strong as his physical attributes. That attitude was definitely appreciated by PA head coach Kevin Kelley and former Arkansas tight ends coach Barry Lunney Jr.

The interesting factor for the Chargers and Henry will be how the team adjusts at the quarterback position. LA is apparently going to ride with journeyman Tyrod Taylor after longtime star Phillip Rivers and the team cut ties after 16 seasons. Rivers will try to resurrect his career in Indianapolis, and Taylor will attempts to shake off the rust after only throwing seven passes dating back to Week 4 of 2018. His backup will most likely be an inexperienced, younger player.

I have my doubts about Taylor. As sharply as Rivers had declined, he’s still more capable than Taylor. The Chargers must think by locking in Henry and featuring talented and versatile Austin Ekeler in the backfield, that Taylor will have the help me needs. He has the ability to electrify, it just appeared that he was no longer an NFL starter.

Regardless of what happens at QB, Henry will do his part. There will be pressure from the media to live up to his big deal, especially since Kansas City Chiefs standout tight end Travis Kelce, a defending Super Bowl champion, resides in the AFC West as well. That will be brought up more than a few times this season, but Henry will take it in stride. The Chargers made at least one smart offseason move.