Cheers at the OPO Now Open on the Fayetteville Town Square

One of central Arkansas’ favorite restaurants has planted its flag in the heart of Fayetteville.

Cheers at the Old Post Office, an iteration of Cheers in the Heights, officially opened on Friday, April 5, after months of anticipation.

The restaurant, as the name suggests, is located in the former Fayetteville Post Office at 1 E. Center Street in the center of the historic Fayetteville Town Square. It’s the first time in nearly a decade that the old post office is home to a vibrant restaurant.

The menu will be familiar to those who have dined at Little Rock’s Cheer in the Heights. Entrée items include filet with blue cheese sauce, seabass, pasta Orleans, sea scallops and much more. Cheers at the OPO also offers great options for soups, salads and sandwiches. 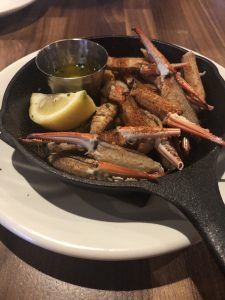 The main floor of the restaurant, which will be familiar to those who have been inside, provides a casual dining setting with televisions set to sports, as well as a bar. The restaurant also offers private dining accommodations. The basement of the building is being developed into a bar and events space.

The location of the old post office in Fayetteville’s charming downtown square puts Cheers in walking distance of specialty shops, attractive boutiques and unique bars. A number of businesses have set up shop in the area, as well. 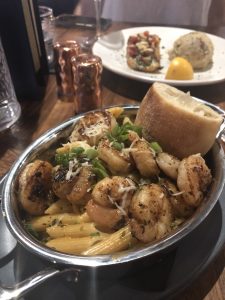 Pasta Orleans (front) and Seabass are just a couple of the seafood favorites on the menu.

While Dickson Street, long considered the hub of Fayetteville’s nightlife and dining, has experienced a considerable amount of turnover in recent years, the town square area enjoys a resurgence. Cheers at the OPO looks to be an anchor right in the center of the square as it celebrates the historic property that means a lot to Fayetteville residents.

The property served as a U.S. Post Office from 1911 to 1963. The building was almost demolished in the mid-1970s but was saved thanks to a group of citizens who petitioned to preserve the Neoclassical Revival structure. It was added to the National Historic Register in 1974.

In 1977, owners Enda and Ronald Bumpass converted the building into a restaurant, the OPO Restaurant and Bar, which served locals until the early 2000s. In the time since, it has been home to Hog City Diner, Sodies, Urban Table, Stogie’s, Jammin’ Java, Country Outfitter and Hayseed Ventures.

New owner Curtis Arnold and family purchased the property last summer before partnering with Little Rock’s Chris Tanner, of Cheers in the Heights and Samantha’s Tap Room, to develop the restaurant and menu.

For now, the restaurant is only open for dinner, starting at 5 p.m.