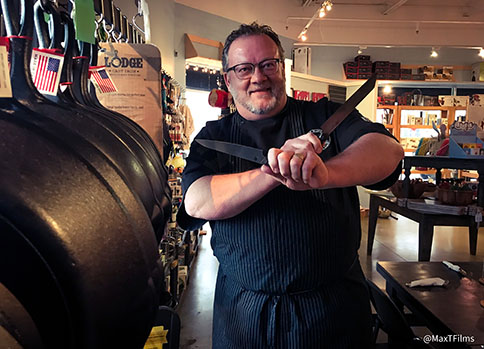 Open up this month’s AY Magazine, and you’ll see that readers chose Chef Jamie McAfee as the Best Chef in the state. 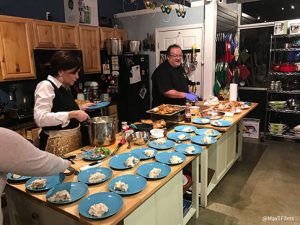 Lisa and Chef Jamie whip up a great meal!

He’s the general manager and executive chef at the Pine Bluff Country Club and has been cooking all of his life. His father was the chef at the Delta Country Club in McGehee from 1967-1986 when Jamie took over. He moved to Pine Bluff in 2003 and has been there ever since.
Now Chef Jamie is also an instructor at Pulaski Technical College’s Culinary Institute and is competing in April in the famed Diamond Chef Competition and will be pitted against his former students. 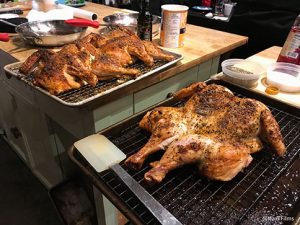 Last night he was my sous-chef as I taught a cooking class at eggshells kitchen co. in Little Rock. That’s laughable, isn’t it?
It all started when I asked him for his famous salad recipe. He said, “I’ll come show your students how to do it.” I immediately turned him down. No way did I want the state’s best chef watching me stumble over 20 students teaching how to cook a spatchcock chicken (Monday’s recipe for aymag.com).
My husband insisted I reach out to him and humbly accept his offer. I did and you can see from the photos, we were well-fed which is the goal of every country club chef.
Try out his salad recipe for yourself! 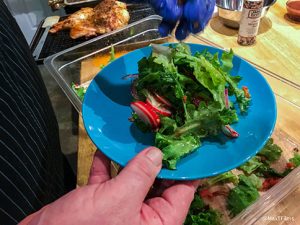 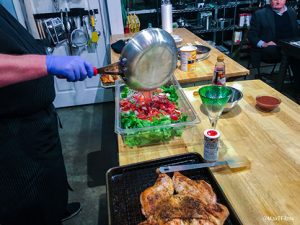 Pouring the vinegar and bacon drippings

Directions
Cut the lettuce to desired thickness. Chop the tomato, slice the onion and radishes thinly, and slice the bacon once you cook it.
Put all ingredients in bowl except vinegar and bacon
Cook bacon crispy, keep the hot drippings separate then pour 2 oz. of vinegar, hot bacon, and hot drippings over other ingredients seasoned with salt and pepper and serve .
The reason to keep them separated is so you can determine how much bacon drippings you want to put on the lettuce.
This should do about 4-6 salads depending on the size.
READ MORE: 2019 AY Readers’ Restaurant Poll