A Criminal’s Journey To Christ: How A Gang Member Became A Church Deacon 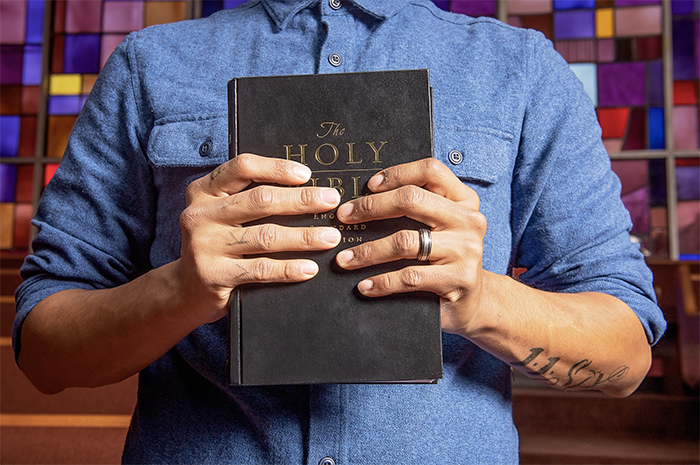 When Gilbert Gonzalez preaches, he walks onstage clutching a Holy Bible in his tattooed hands. He talks with his hands, throwing them downward in rhythmic motions as if he was rapping the words he reads.
“We, as Christians, should be committed with each other — being on mission and pushing back the forces of darkness by proclaiming the Gospel,” he said in a recent sermon about Biblical love and fellowship.
Slang words like “homie” sometimes sneak into Gonzalez’s sermons. He isn’t a proper preacher or really a preacher at all. He’s a former King Cobra gang member turned church deacon.
“I pray as a church, Lord, that our relationships would display the beauty of the Gospel, knowing that we have been saved,” he said, eyes squeezed shut and hands still moving. “We have been redeemed.”
When Gonzalez preaches, people who wouldn’t normally frequent church pews come just to hear him, says Dan Eckels, vice chairman of the deacon board at First Baptist Church in Fayetteville.
“He’s very outspoken about his faith,” Eckels says. “He’s just like a regular guy, but when he’s going to preach, both times there have been people from the outside.”
In Douglas Falknor’s 17 years as senior pastor of First Baptist, he has never ordained a deacon with a criminal past like Gonzalez’s. But he doesn’t doubt Gonzalez is a changed man.
“When you are with him, you can see the love of the Lord in his life and in how he talks with his wife and his kids,” Falknor says.
First Baptist ordained Gonzalez, who works as a foreman with Marrs Electric, and his older brother Robert Gonzalez as deacons last year – about four years after Gilbert left the gang in Springdale.
“It’s something that I came from, and it’s never going to go away,” Gonzalez says.
His tattoos and arrest records are a permanent reminder of those days, and he carries that with him into this life as a 30-year-old husband and father of two. Although he no longer claims the gang as his own, he still interacts occasionally with King Cobra members and with teenage gangsters in Northwest Arkansas. Gonzalez advocates for the new life he found, in part because he feels responsible for those trapped in a culture he helped create, he says.
“Anyway I can, I’m invested in my community in Springdale,” Gonzalez says. “We influenced a lot of young people, and it’s just sad to see. And that breaks me.”
In 2012, there were approximately 30,700 gangs with 850,000 gang members reported in the U.S., according to the U.S. Department of Justice. Springdale police declined to give specific information regarding gang activity, but Officer Keith Foster, public information officer for the Rogers Police Department, says local gang activity isn’t extremely violent like what’s on TV. “What’s more common here is the local, homegrown activity that involves teenagers engaging in crimes like illegal drug possession and distribution,” he says. The few who join gangs are typically drawn in by the lifestyle or the community.

Gonzalez’s life began in a poor immigrant household in Fresno, Calif., a city rampant with gangs. Family connections and work opportunities brought the family to Northwest Arkansas before he reached age 10, and eventually, they settled in Springdale. As he learned about his family’s connection to the gang, he grew interested in joining. His mom had been part of the King Cobras when she lived in Bell Gardens, Calif., and his uncles and cousins were involved in the Springdale gangs.
One night at a party, an uncle took Gonzalez aside, the smell of alcohol filling the space between them. He pulled Gonzalez, who was about 15 years old, closer in a sort of headlock, gripped him tightly, then threw the first punch. Gonzalez knew he was supposed to fight back. This was the jumping-in ritual he had waited to experience. His uncle beat him for what “felt like an eternity,” he says.
“After a minute or so, I got up, and he’s like, ‘You’re jumped in,'” Gonzalez recalls. “He told me that, from that day on, there’s no way out of this.”
Gonzalez’s criminal activity spiked, and his alcohol consumption escalated, too. He got into drugs — first marijuana, then cocaine, Xanax and meth. Whatever he wanted, his uncle had it and was proud to supply it to his nephew.
Common criminal activity within the gang involved drug dealing, assault and robbery, Gonzalez says. Fighting people who threatened the gang was a way to earn respect. King Cobra gang members sought power through fear.
“I would show up and get what I wanted. If not, I would steal it from them or beat them up,” Gonzalez says.
Around age 24, he began to question the dangers of this lifestyle. He started dating Karen Bahena, a “good girl” with a big smile who often invited him to church.
One night while Bahena was studying at home, she got a call from Gonzalez, who had been arrested for public intoxication. Bahena bailed him out of jail just after midnight that Sunday morning, using money her mother lent her, she says. Bahena’s mother sang in the church choir and insisted that Gonzalez come to church that morning. Hungover and sleep-deprived, he showed up to appease her.
“I didn’t know what she was going to do,” Bahena says. “But she wasn’t rude. She greeted him like any other person.”
Gonzalez started attending church more often and continued questioning his choices. He stopped doing drugs but drank more to compensate for it. In 2013, he fell to his knees in prayer, giving up all attempts to sober up on his own and “felt a peace like I’d never felt before,” he says. He stopped drinking, but it took nearly two years before the desire to drink subsided.
“It wasn’t easy. I struggled. I relied on God’s promises and His Word,” Gonzalez says. 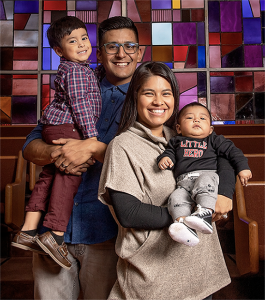 Around age 24, he began to question the dangers of this lifestyle. He started dating Karen Bahena, a “good girl” with a big smile who often invited him to church.

When Gonzalez became a Christian, he wanted his family members to know. He told his uncles that he “was done looking over his shoulder,” but they didn’t fully believe Gonzalez had changed. They tried to entice him, saying “you know you don’t want to leave this,” he says.
Confrontation in the years to follow was uncomfortable, but Gonzalez thinks they’ve adjusted to seeing each other a few times each year to catch up as families do. His uncles in the gang haven’t hurt him or threatened him for leaving, but he says the possibility of retribution still exists.
Gonzalez’s three brothers, his sister and parents eventually became Christians too. Gilbert and Robert, who didn’t join the gang but took part in similar behavior, accept invitations to speak with Springdale youth about their conversions, and they reach out to other teen groups with similar backgrounds.
Debbie Matteri, a teacher at Southwest Junior High School in Springdale, heard their stories when they spoke at Abba’s House Coffee Shop in November 2016. She later reached out to ask if the brothers would speak at a club meeting for eighth and ninth grade boys. Gilbert and Robert met with the club a few months later, shared their testimonies and performed Christian rap.
“It wasn’t at all like they were preaching,” Matteri says. “This young, sharp-dressed, professional person related to (the boys).”
Gonzalez wishes that, at that point in his life, someone had been there to convince him that his lifestyle was destructive. “I’m trying that with these kids,” he says.
He’ll try it with his kids too, he says. Above his fireplace, a framed verse from the book of Joshua reads, “But as for me and my household, we will serve the Lord.”

A Cut Above: Knifemaking in Arkansas
December 25, 2018

About You Magazine Book Report
December 25, 2018