Wetlands are a vital part of Arkansas’ ecosystem, providing habitat for many species of birds, fish and other animals. However, these sensitive environments are being threatened by increased litter and other forms of pollution. One of the major wetlands in central Arkansas is the William E. “Bill” Clark Presidential Wetlands, located in Little Rock along the banks of the Arkansas River. Activists are working to clean up the wetlands before litter can harm the area and animals significantly.

The wetlands sit along the banks of the Arkansas River from the Clinton Library back up to the Nature Center providing a 13-acre restored habitat for numerous species of fish and wildlife. The wetlands provide food, water and shelter to all kinds of wildlife making cleanups like this of great importance. On any given day at the Wetlands, you can find a number of species including softshell turtles, red-eared sliders, sunfish and short-nosed gar. Red-winged blackbirds, robins, mockingbirds, barn swallows and Canadian geese are also commonly seen.

You can also find one of three groundhogs that call the Wetlands home. Not only does the Wetlands act as a resting ground for migrating birds, which allows them to rest and feed before taking flight again, it also serves as a nursery for many species of fish and wildlife. 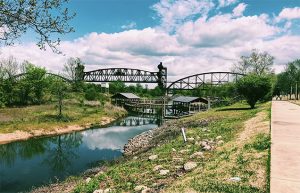 The Wetlands makes such an impact on our community that even the smallest amount of trash build up can be very costly to everything around it. Litter and debris can affect the quality of the water which then effects the health of the wildlife. “We’ve come down to the Wetlands and seen all too often turtles nipping at pieces of Styrofoam floating in the water,” Lauren Marshall, Arkansas Game and Fish Commission (AGFC) explains.

Styrofoam is extremely harmful to the environment due to the excessive length of time it takes to decompose. Animals mistaken pieces of trash for small prey they feed on all the time. “The most common pieces of trash we see in the Wetlands are Styrofoam cups, fast food bags, bottles and fishing line.”Marshall adds. “We have even come across large fish tangled in the fishing line.”

It’s not always people just throwing their trash on the ground instead trashcans either. Much of the trash and debris that can be seen in the Wetlands is from vehicles as they travel across the I-30 bridge, which then lands in the Arkansas River. 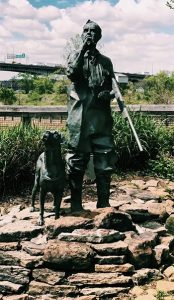 Litter also finds its way into to the wetlands from the water run-offs in the drainage system. This drainage area, also referred to as the Watershed, is a rectangular area of roughly 70 acres that stretches from the Nature Center to the Post Office and then over towards Heifer before coming back to the Wetlands. Any trash that makes it into these specific drains will end up in the Wetlands or various other waterways. The Wetlands act as a giant sponge and a buffer between the Arkansas River which feed them and the developed spaces around them. Trash that builds up could block an established exit way or reroute water into an area more likely to cause erosion or flood plain like conditions.

There is an environmental program that was created to engage public education by using art to communicate the function and importance of local storm drains. Drain Smart utilizes local artists to transform storm drains into pieces of artwork that makes the public aware of which drains lead into various waterways such as the Wetlands.

Drain Smart isn’t the only preventable measure that has been put in place to help with limiting the water pollution. The Bandalong Litter Trap, a solution created from Australia, is a floating device that is installed at the drain run off that empties directly into the Wetlands. This device prevents waste from getting further into the Wetlands or river by collecting, and also, retaining litter and debri that has made its way through the drainage system. As the litter fills up, the device will continue to raise which allows AGFC to come empty and dispose of waste properly. The Bandalong was designed to also prevent any direct harm to fish or wildlife allowing them to pass through the device safely and easily.

Even with the effort and success of the Drain Smart program and the Bandalong Litter Trap, these are not a 100 percent solution. We still need help from the public in resolving this problem. Volunteers from cleanups like this one have proven to provide a great impact on the efforts to keep are environment clean and waste free. Chanel Pennington of the Arkansas Game and Fish Commission hopes to encourage anyone attending this cleanup or who visits the Wetlands to stop and listen and take in all the sounds and sights of the fish and wildlife. “Maybe then they will leave with a great appreciation of our natural resources and understand why improving the habitat of our wildlife is beneficial to everyone,”Pennington explain. “What’s good for wildlife is good for us as well.” 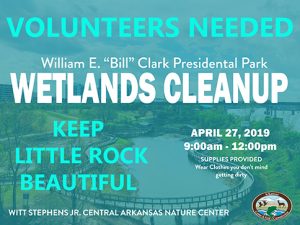 The Witt Stephens Jr. Central Arkansas Nature Center is hosting a cleanup of the William E. “Bill” Clark Presidential Wetlands on Saturday, April 27 and is encouraging and welcoming any volunteers willing to participate. The Keep Little Rock Beautiful city-wide cleanup was originally scheduled for March 3 but had to be pushed back due to weather conditions. The Cleanup will be from 9 am – 12 pm although volunteers are not required to stay the entire duration of the Cleanup. Supplies and equipment will be provided, and volunteers are to meet at the Nature Center at 9:00am.

For those not able to attend the cleanup there are still lots of ways you can help to keep our water clean and wildlife habitat healthy. One could start opting to recycle or throw away items rather than leaving them on the ground, even if they were not the ones who created the litter. “If everyone took one or two small steps to minimize their impact on our natural resources, the outcome would benefit all of Arkansas”, Chanel Pennington of AGFC explained.