If every pie were perfect, we wouldn’t have cobblers. This uniquely American dessert came about when early settlers found it difficult to follow their traditional pie recipes with the ingredients and utensils they had available, so they improvised. Rather than spending an afternoon rolling pie crusts and carefully baking their pies, pioneers cooked fresh fruit and leftover biscuit dough in deep pans over open fires, resulting in a delicious, filling dish. Cobblers were so popular, they typically were eaten as an appetizer or a main course; they wouldn’t be primarily considered desserts until the early 20th century. Cobblers continue to delight American families, many of whom have passed down cobbler recipes to their children and grandchildren.

The Clinton Presidential Center’s Culinary Camp continued that tradition by encouraging young chefs to create their own cobblers, throwing a unique spin on an old dish via a reality TV-style culinary competition. This year, the third-year students traveled to the berry farm at Wye Mountain to pick fresh fruit for their cobblers, then separated into groups, each vying for dominance in the first of that week’s competitions: Berry Wars.

Savvy Baker, daughter of AY About You publisher Heather Baker, who was one of the competitors at the culinary camp this year, particularly enjoyed her experience. “We first went to the Wye Mountain Berry Farm,” Savvy says. “We picked out our fruits, then they told us about the Berry Wars. Me and two of my friends were in charge of the crust. That was my first time ever baking cobbler, and it was so good and fun to make.” 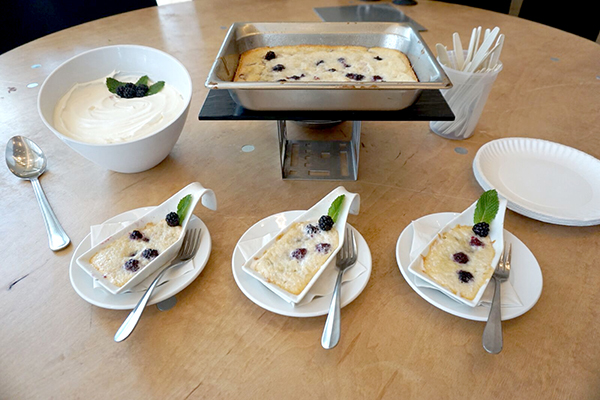 The kids’ finished desserts on display.

Jacob Plank, third year student at the Clinton Presidential Center’s Culinary Camp, was also among the field of student competitors. His favorite part about cooking is “the chemistry, such as, how the food rises and what causes the taste to be that way,” he says. Plank’s cobbler was made with fresh blackberries from the Wye Mountain farm, and an egg-free batter that was softer than a more standard crispy crust, almost like a cake.

The Clinton Center provides a comprehensive approach to the culinary arts for its young prospective chefs, providing firsthand knowledge of the process our food takes from farm to table, gastronomic science and experience with coordinating a kitchen. “They learn how to work backwards and make sure that they delegate certain things that someone grabbed this [ingredient], someone grabbed that and they have to work under a time frame,” says Michael Selig, the Clinton Foundation’s Director of Food, Beverage and Events

Selig was inspired to plan the cobbler bake-off after realizing their potential for avoiding food waste. “I see a lot of these commercials on TV about why Americans are wasting so much food,” Selig notes. In fact, Americans throw away half of all the produce we purchase, roughly 60 million tons annually.

“[With] cobblers, you’re utilizing what you have on hand and using it before it goes bad. Just something so you aren’t wasting that fruit.” Selig’s tip for making the best tasting, least- wasteful cobbler? Using fresh, locally-sourced seasonal fruit. “Blueberries are in season, and that’s what you should be making a cobbler out of,” Selig advises. If there is leftover fruit after baking the sweet treat, utilize it elsewhere; either in a puree, or in ice cream — whatever way you can to reduce waste. 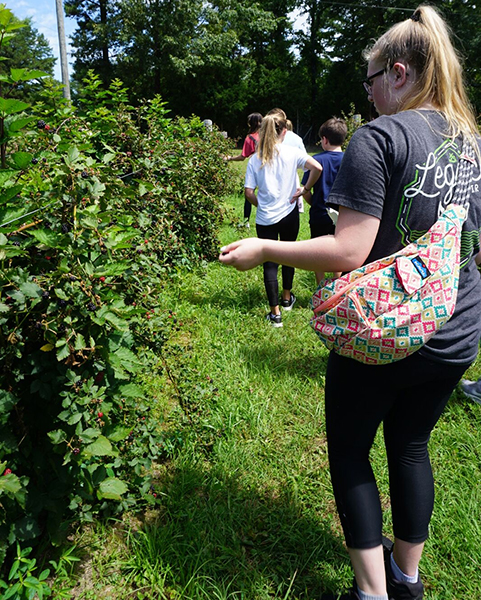 The culinary camp’s mission of cultivating the next generation of chefs is particularly close to Selig’s heart, himself having spent nearly 20 years in the restaurant business prior to his work with the Clinton Foundation. “The bottom line is if you teach them how to cook, they’ll never be hungry,” Selig posits. “So we teach them a variety of skills, and we find out that a lot of them go home and try to emulate what we are teaching to their brothers and sisters. So it’s pretty cool.”

Students may attend the camp for four years, developing a holistic understanding of the restaurant world. At the end of each week is a graduation. In the first year, the campers earn their chef jackets, second and third-year students are given a variety of kitchen tools, and fourth-year graduates receive a full knife roll after spending much of their week training proper knife skills.

As for his aspiring chefs, Selig recommends they do whatever they can to gain practical experience, through attending camps like his, or, if they can, become a dishwasher at a local restaurant and work their way up in the kitchen. Savvy Baker, speaking as a burgeoning culinary artist at the opposite end of the chef life cycle, agrees.  “Practice makes perfect,” Savvy says. “My first time baking I put way too much baking powder in my cakes, and it didn’t turn out so well. When you start, the most important thing to keep in mind is to not give up. You’ll get the hang of it.”

“If you never experiment and fail when you’re cooking at home,” Jacob Plank advises, “you will never learn interesting things to cook and interesting ways to cook.” 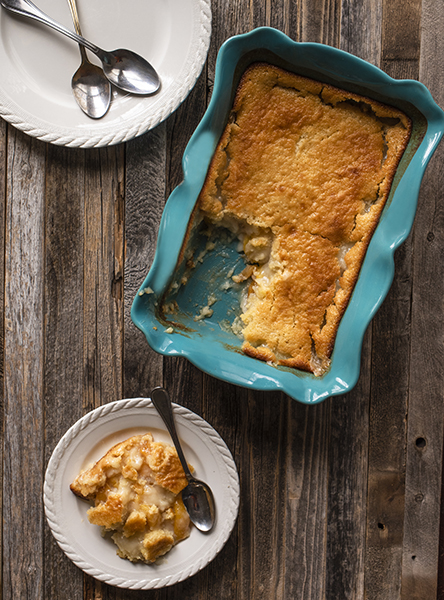 I am a notorious non-baker, unless the recipe is really easy, and I don’t have to measure a bunch of stuff and make it a science experiment. So this is it. This is the recipe you will save for all the fruit seasons. We are in August, so that means the good peaches from the farmers’ markets are gone, but of course you can always get them at your local grocery store. Blueberries are also perfect for this or a combination of both blueberries and peaches.

2 – 2 ½ cups sliced fresh fruit (peaches, berries or a combination of both)

3. Pour batter in baking dish over the butter. Sprinkle fruit on top of the batter, do not stir. Bake for 1 hour or until golden brown.