Around AY Magazine’s office, it is cake galore right now. That’s because we are in search of the best cakes in the Natural State in honor of AY Publisher Heather Baker’s birthday on Sept. 24.

So far, Baker and AY Editor-at-Large Lisa Fischer have tested out three cakes in the “Heather and Lisa Eat Cake Because It’s Heather’s Birthday” contest. The two are well-qualified to the challenge – both are self-proclaimed cake fanatics.

For the third cake, Baker and Fischer selected a cake that had to make quite a trip to get to Little Rock – all the way from Magnolia, some 140 miles from the capital. This cake is an old-fashioned coconut cake from Magnolia Bake Shop, the oldest continuously operated bakery in Arkansas. In fact, three generations of the same family have run the store.

“This is the one where they’ve been making the same recipe since the Earth cooled, since 1928. That’s 91 years. Can you believe that?,” Fischer asks Baker.

“This young lady was nominated by one of her super-fans, so we reached out to her and she brought this cake all the way for us to eat,” Baker says.

Before cutting into the cake, Fischer admits she was looking forward to eating this cake in particular. “I swear that I’m sober – I’m already slurring – it’s because I’m thinking about this,” she says, pointing to the cake. “I dream of coconut.” 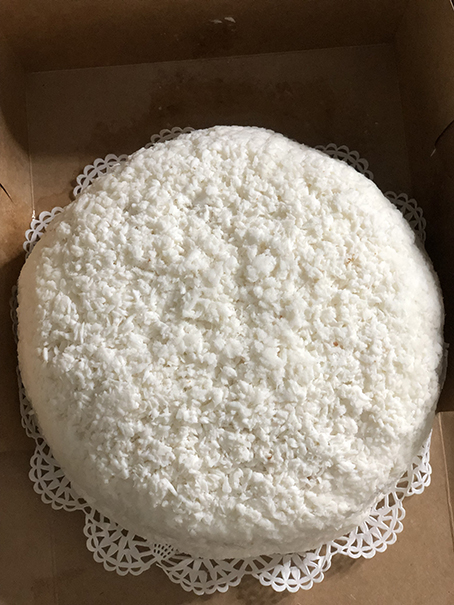 Once the duo taste it, both are struck by the freshness of the cake and its unique taste.

Fischer attributes that the freshness of the coconuts in the cake, and the decision to keep it nice and cool for the judges.

Both agree that there’s a reason that this is a specialty cake for Magnolia Bake Shop. “So far, so good,” Fischer says.

That’s now three cakes down with seven more to go. All of the cakes will be judged according to presentation, taste and creativity. A winner will be announced later this month, likely around Sept. 24 – Baker’s birthday!

And now the participants have an added incentive: the winner of the cake contest will be featured in an issue of AY!