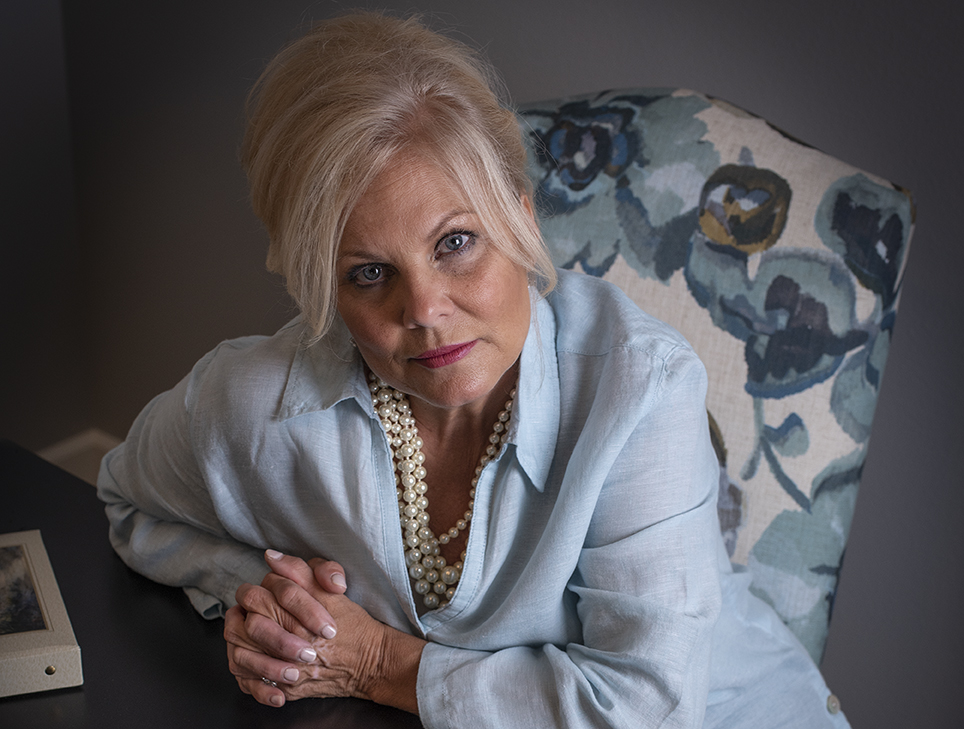 By Dwain Hebda | Photography by Jamison Mosley
Laurie Jernigan brushes a platinum lock of hair from her forehead and scrolls her eyes around the casually elegant living room. It’s tranquil here, the kind of place where you easily envision friends sharing a laugh or teenagers gathering to plan homecoming.
They haven’t lived here long, the Jernigans. The place is still too new to radiate many memories, to be fully broken in with the joys and tears of everyday family life. Also too new to be taken up, cluttered, with the haunting shadows of the place they left behind.
“I’m OK,” says Laurie, her voice sharp and straight as a silver pin. “It’s so stupid to say that. I don’t know any other way, or whatever, to say.”
Longtime Little Rock interior designers Edwina Crockett, Tom Chandler and crew surprised the family by decorating the new house pro bono while they were on vacation. But much of it is still a blank slate, awaiting, like its occupants, what comes next. 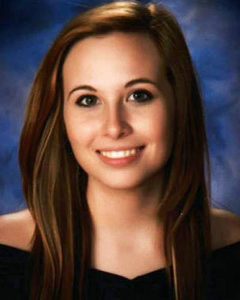 “I feel like I’m on a different planet, and it makes me sad,” Laurie continues. “Because I’m going to be the one that walks into a party that no one wants to talk to or no one wants to see come to the party because it won’t be a party anymore. It’s like I bring a sadness with me. I feel like that.
“It’s like everyone says, ‘God didn’t carry you this far to drop you,’” she adds. “I don’t want my next chapter to be ‘Well, this is what happens when God drops you.’”
RELATED: “Gone Girl: The Disappearance of Ebby Steppach”
She shifts, then levels her gaze.
“It’s a whole different world.”
Laurie knew instinctively that her daughter, Ebby Steppach, was dead long before the missing young woman’s remains were found May 22 in a drainage pipe in a west Little Rock park. But that didn’t lessen the shock of the positive identification a day later. As tired as she had grown of carrying the uncertainty of her daughter’s whereabouts, the demon truth clawed into her that much harder, rending whatever veil held back a stabbing, piercing, howling sorrow. 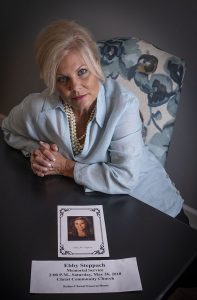 “I knew she was dead in my heart, but there’s always a little bit of it that’s not final, which I didn’t know existed. Just knew I had joy because I believed she was gone and happy,” Laurie says.
“Now that it’s final, it’s moved to a whole different world of having a deceased daughter. It’s different now. It truly is grieving. There’s realizing that there’s an obituary. I’ve got a daughter I’m never going to see on this earth again. It’s completely final.”
Every violent death, especially that of a young person, is unnatural and shocking. Ebby’s was all the more so for having been preceded by her abduction in October 2015, not far from where she was eventually discovered.
Even worse, the opening months of the investigation were indifferent at best — slipshod at worst — and Laurie and her husband, Michael, found themselves in a spiral of ever-more contentious clashes with investigators over what they perceived as lack of accountability.

The family’s perseverance resulted in widening press coverage of the case, much of it damning of the investigation. After more than a year, the case was reassigned to an experienced detective, Tommy Hudson, now of the Little Rock Police Department’s (LRPD) Cold Case Division. It was on Hudson’s hunch that Ebby was discovered, simply by engaging Public Works.
Why the original investigators weren’t similarly moved to check a drainage pipe that everyone knew was there is a matter of agonizing conjecture; LRPD has a firm policy against commenting on the specifics of open cases. Laurie doesn’t need to hear it from them, anyway.
RELATED: “Find Ebby Jane: In Search of the Vanished”
“I asked Tommy point-blank, ‘Would you have (initially) looked and gone through with the city of Little Rock blueprints and looked at the drainage system with cameras?’” Laurie recalls. “He said, ‘Yes.’ And I said, ‘It wasn’t done?’ And he said, ‘No.’
“That’s all I needed to know,” she adds. “Very simple. It just goes back to how they failed. She was considered a runaway for how long? As we were told, ‘She’ll show up.’”
Laurie’s tone doesn’t hold the bite it once did, for a couple of reasons. She’s told the story so many times to so many investigators and reporters during the ordeal she’s a little sick of it. And the constant pressure of pushing forward while holding together the rest of her family was so exhausting that whatever zeal she might have had for justice was long ago sapped by the desperate, unrelenting hunger for answers. 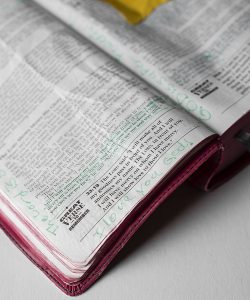 “I don’t have to talk about the police anymore. I don’t have to fight anymore. I don’t have to muster up energy to think about it,” she says. “I know that there’ll be an arrest. They’ll find out who did it. I know that in my heart.
“I have a lot of people contact me. Yesterday someone’s like, ‘I’d love to take up this fight for you and do justice for Ebby and do the bumper stickers and all that.’ But I’m not in that fight. My fight’s over.”
Still, it’s not really that simple. Glance over the Find Ebby Steppach Facebook page and you immediately see the nerve that the case touched is still raw. Particularly conspicuous are the posts from people whose nightmare has not yet ended, who hope some of the residual love and concern Ebby engendered can be directed toward their own frantic situations.
“It’s been six weeks since Morgan has talked to any family or friends.”

Laurie’s home might be new, but it’s full of reminders of the past.

“JAKE IS STILL MISSING!”
“We believe Ashley has either been ‘kidnapped and/or physically harmed.’ Please share.”
Laurie reposts these out of a knowing concern for others. She also participated in 2017’s Closer to Home – Arkansas Takes Action hosted by Attorney General Leslie Rutledge. Her feedback, along with that of other families, resulted in a handbook the police now give to people whose loved one goes missing. The booklet provides step-by-step checklists and resources for use in the critical early hours of such a crisis. Laurie is among those specifically thanked for her contribution; she credits Ebby instead.
RELATED: “I’ll Fly Away”
“It’s what any mother would have done who fought for their child,” she says. “It was just like another ‘Thank You, Lord’ that it’s changed something. I feel like this whole experience with missing Ebby and losing her has changed a whole lot of things.
“What I hope people say about our family is, when something is handled differently for someone 10, 15 years from now, they say, ‘Well, there was this girl that did this and this, but they changed it now because of this and this.’ I hope that’s how they remember her.”
A pause. 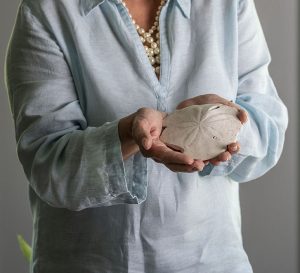 Laurie and her daughter would often search the beach for unbroken sand dollars. She found her first one not long after Ebby’s disappearance. She believes it was a sign.

“If I’d found her two days after her death, it wouldn’t have changed anything,” she adds. “It would have changed our life, but it wouldn’t have helped anybody else.”
The makeshift shrine of flowers, notes and other trinkets in the park where Ebby disappeared is gone now, but the space is still hallowed ground. Laurie went there often and marveled how even in the darkest hours of the ordeal she could derive a measure of comfort from the spot. It was only after Ebby was discovered, just a few steps away, that she understood why.
“I always went up to where her flowers and stuff were at the park,” she says. “Now when I think back, I could never go away from that place. I even talked to that place; I never looked from left to right or even felt like I’d go over here or over there. 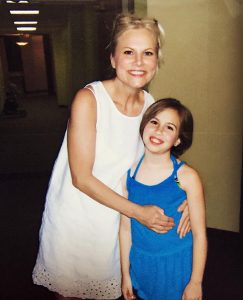 Laurie and a young Ebby Steppach smile for a photo.

“I always found myself looking and talking to that same place, right down the hill behind where her flowers were. I could never go anywhere different. She was right there.”
This is the fourth instalment in a series about the disappearance of Ebby Steppach. To read the first three, visit aymag.com.