Connected by Craft: ‘Back to Basics’ at the Arkansas Craft School 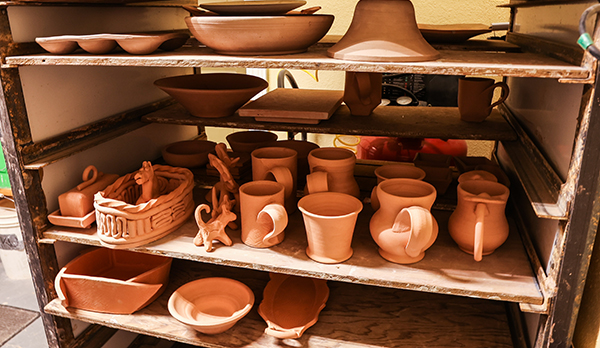 Connected by Craft: ‘Back to Basics’ at the Arkansas Craft School

There’s a return to the basics of craftsmanship at the Arkansas Craft School on the corner of South Peabody and Arkansas 66 in Mountain View. Instructors there teach students how to hammer and hone knives, craft leather, turn wood to make pens and furniture, sculpt pottery items, create jewelry and work with hot glass to form marbles and paperweights.

For many, it’s a nostalgic trip back down memory lane. There are no 3D printers here to mass produce things. It’s all done by hand and skill and passion to make one-of-a-kind items.

For those who have lived in Stone County years ago, though, hand-making things was not a hobby. It was a way of life.

Perched at the foothills of the Ozarks in north-central Arkansas, Mountain View was home to those who, for decades, had to be self-sufficient.

It’s a quaint idea now. The town of 2,800 is full of craft shops, and musicians often gather at the courthouse square most summer evenings to play the local hillbilly music made popular more than half a century ago. The Ozark Folk Center State Park located north of the downtown embraces the craftsmen of yore, drawing thousands of tourists yearly to see demonstrations of blacksmithing and other skills. 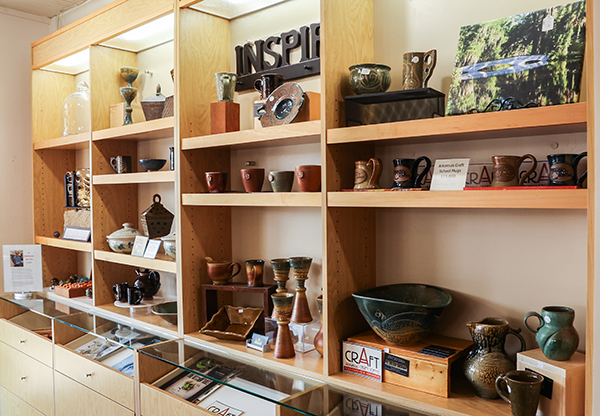 There’s pottery, stitching and everything in between at the craft school.

“This is how they lived,” says Mike Doyle, the director of the Arkansas Craft School. “They had to make their own tools and crockery 60 or 70 years ago. They had their own leather shop and a blacksmith.”

The craft school was created in 2007 after a Rockefeller Foundation report highlighted the importance of crafts for the rural Arkansas economy. The report said it was especially prevalent in the Ozark region.

The school was housed in a one-room schoolhouse for 10 years. It served as the education arm of the Arkansas Craft Guild to support practicing artisans and to stimulate success in the creative economy.

In 2017 the school moved into the old Lacky Chevrolet car dealership a block from the Stone County Courthouse. The dealership was a landmark in the town, selling Chevy Citations and Cavaliers in the 1970s from its sandstone rock building. Next door, in similar rock buildings, was a real estate company and a pool hall. Across the street, in a building shaped similar to the Times Square Flatiron Building in New York, is a land company.

Workers remodeled the dealership in 2018, Doyle says, to make more room for classes. Upon completion, the craft school now features 6,500 square feet of craft space. The school added a second building in 2021 with a $140,000 grant from the Windgate Foundation to purchase the Heritage Springs Blacksmith Shop on Arkansas Highway 87.

The new building, called the Annex, holds workshops for metalworking and has programs for rural youth and for area veterans.

“The [grant] recognizes the importance of crafts in the rural Arkansas economy,” Doyle says. “The motive for starting the school is that Mountain View is the center for crafts in the state.” 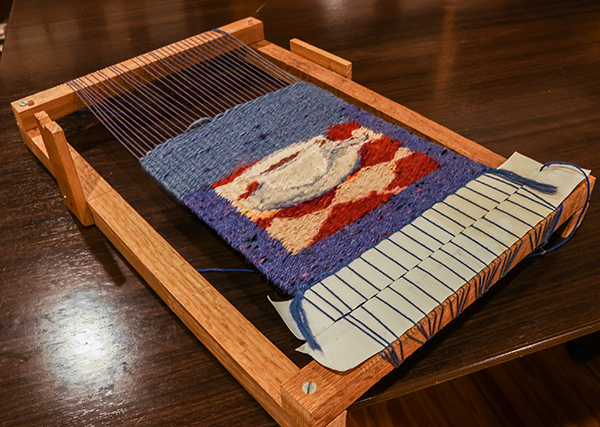 Students can pick from a variety of courses offered each month. Some classes may last a day, others are held for weeks.

“We’re exposing people to new skills,” says Bill Gartung, a woodworker who holds a popular woodturning class to teach students how to make pens. “We have to use our imaginations. It’s tapping into older ideas to create new things.

“Everyone enjoys the final product of something, but need to think, ‘How did it get there?’ We’re getting into the learning process.”

The instructors are passionate about their handiwork and, like most creative types, they are somewhat quirky.

Gartung enjoyed making pens and other wood products so much that when he was ministering a church in Nome, Alaska, he’d go into his shop when it was 28 degrees below zero to work. He’d bundle up in a winter parka, turn heaters on and make his wooden pens.

He moved to Conway to be closer to his wife’s family and then relocated to Mountain View because of the creative draw of the town.

“I love going back to work with my hands,” Gartung, 64, says. “Once you’ve hand-turned a pen, you’ll never go back to using a Bic pen.”

James Crowell, a knife-making instructor at the school, was once a mechanic in New Jersey. He was also a bladesmith and taught classes in Maine. In an attempt to do local humor, he said he would stand next to a sign in Maine that read “Lobster Tails $2.” He’d wait for someone to walk by and then say, “Once there was a lobster …” and would spin a “tale” about the crustacean.

He made more money with his hands than his wit. He began making knives in 1980 and joined a knife-making group. In 1986, he earned his master smith rating and was certified in the craft.

He moved to Arkansas in 1978; his trek was the result of a complex family connection.

“My first wife’s older sister’s boyfriend’s mother bought a house in Arkansas,” he says. “We inherited it and came here.”

Crowell, 70, began teaching for the school four years ago, holding classes in his shop. 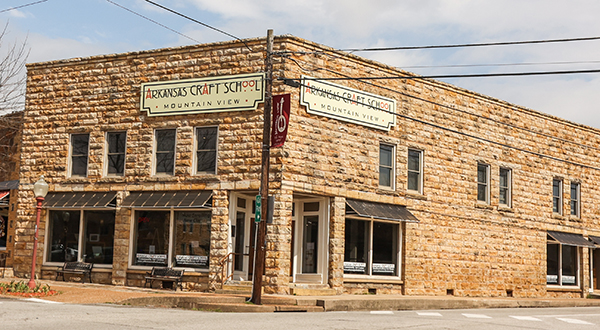 “They all came with an interest, but for varied reasons.”

In his elementary classes, Crowell would use patterns on pieces of metal. He’d tell them to “remove what doesn’t look like a knife.”

In advanced classes, students could heat the metal and bend it, hammering it into shape and then honing fine edges on them.

“I don’t necessarily work to pattern anymore,” he says. “A good bladesmith can make knives without patterns and have them look very close.”

The COVID-19 pandemic has altered the way Ed Pennebaker teaches his glass classes at the craft school. He now mainly teaches students how to make paperweights and marbles, crafting the items out of heated glass.

He can’t teach glass blowing because students had to share the pipes they used to create shapes by blowing through them.

Like the other artists, Pennebaker, 67, is not from Arkansas but instead gravitated to the creativity of the Stone County area. From Kansas, Pennebaker moved to Osage to be closer to his wife’s relatives. They also lived in Harrison before relocating to Mountain View. In addition to glass, Pennebaker also works with steel and combines the two elements in making sculptures.

“Working with your hands is satisfying,” he says. “It’s a little bit different with glass because you don’t actually touch it with your hand. You use tools to manipulate the material.”

He says younger students take his classes not to really possess the things they make but rather the process they take in making them.

“It’s not the collection of objects they want,” he says. “They are collecting experiences. It’s a different mindset.” 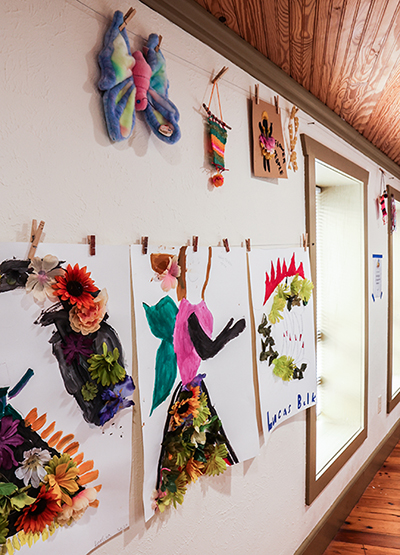 Doyle, 70, who has been the craft school director since December, is a retired Marine Corps officer of 22 years. He returned to graduate school after retiring and earned two masters and two doctorates in educational administration and theology. He was a dean at the National War College in Washington, D.C., before moving to Arkansas.

He says there is a sense of nostalgia for some of those who take the craft classes, but for most who attend, it’s the “feeling of disconnecting” that lures students in.

“You spend the time with yourself,” he says. “There are no cell phones, no internet. It’s a quiet time and you deal with yourself.”

He says the structure of classes differs from regular work life, as well. Rather than dealing with co-workers in offices by popping up to talk to each other in cubicled spaces, or “ground hogging,” students at the school share their experiences.

“It’s an artistic zone,” he says.”They’re in a room with other people. I can watch to see how they mutually grow together. By the third day, they’re returning to old-fashioned ways. They’ll bring things from home to show. People bring food to share with everyone. When it’s time for lunch, they’ll all go together rather than going off by themselves.”

Because the classes are hands-on training, most are limited to about six to eight students, Doyle says. Students range in age from children to retirees. Instructors hold classes for disabled veterans and for school-aged children. Doyle says the older students take classes in the middle of the week; younger ones favor the weekend courses.

Each year, a doctor and several friends travel to Mountain View to take classes, he says. A group of women takes classes together in painting and jewelry making.

“It’s open to anyone,” he says. “We don’t want this to be an elitist organization.” 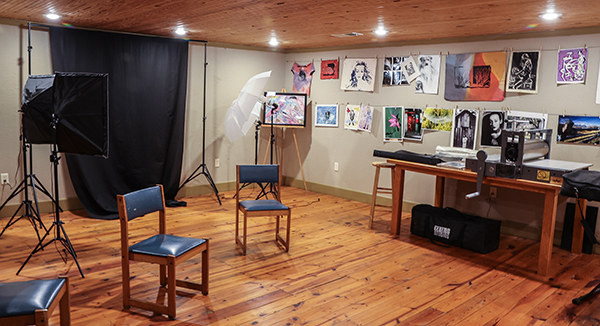 The school lost some momentum when the pandemic hit. Because of social distancing mandates, the hands-on approach to teaching the crafts was altered. But now, Doyle says, classes are returning and the purpose of the school is back in swing.

“It reintroduces the back-to-basics type of work,” he says. “It’s something we were losing as we become more technical. We can mass produce things with machines, but we can still hand-make one-of-a-kind things.

“It speaks to us. Our hands were made to do more than just punch letters on a keyboard.”