[dropcap]Around[/dropcap] the same time the Walton Arts Center in Fayetteville, Ark., welcomed its first patrons, forward-thinkers in northwest Arkansas imagined a regional greenway that would connect cities and towns along the Interstate 49 corridor.

In 2000, the Northwest Arkansas Regional Planning Commission began work on a strategy to bring that goal to life, and this May, hundreds of community leaders and trail enthusiasts gathered in Springdale to celebrate the opening of the Razorback Regional Greenway (RRG). Throughout the planning and construction of the $30 million project, communities that have been Friday night rivals on the football field for generations came together to create a common legacy for the region.

Officially, the RRG consists of 36 miles of multi-use paved trails. It is available for pedestrians and cyclists and provides a valuable commuting alternative between neighborhoods, entertainment districts, schools and city parks. Added with ancillary trails that branch off the main “spine” of the RRG, the total trail mileage almost triples, to 105 miles of trails in the two-county area. 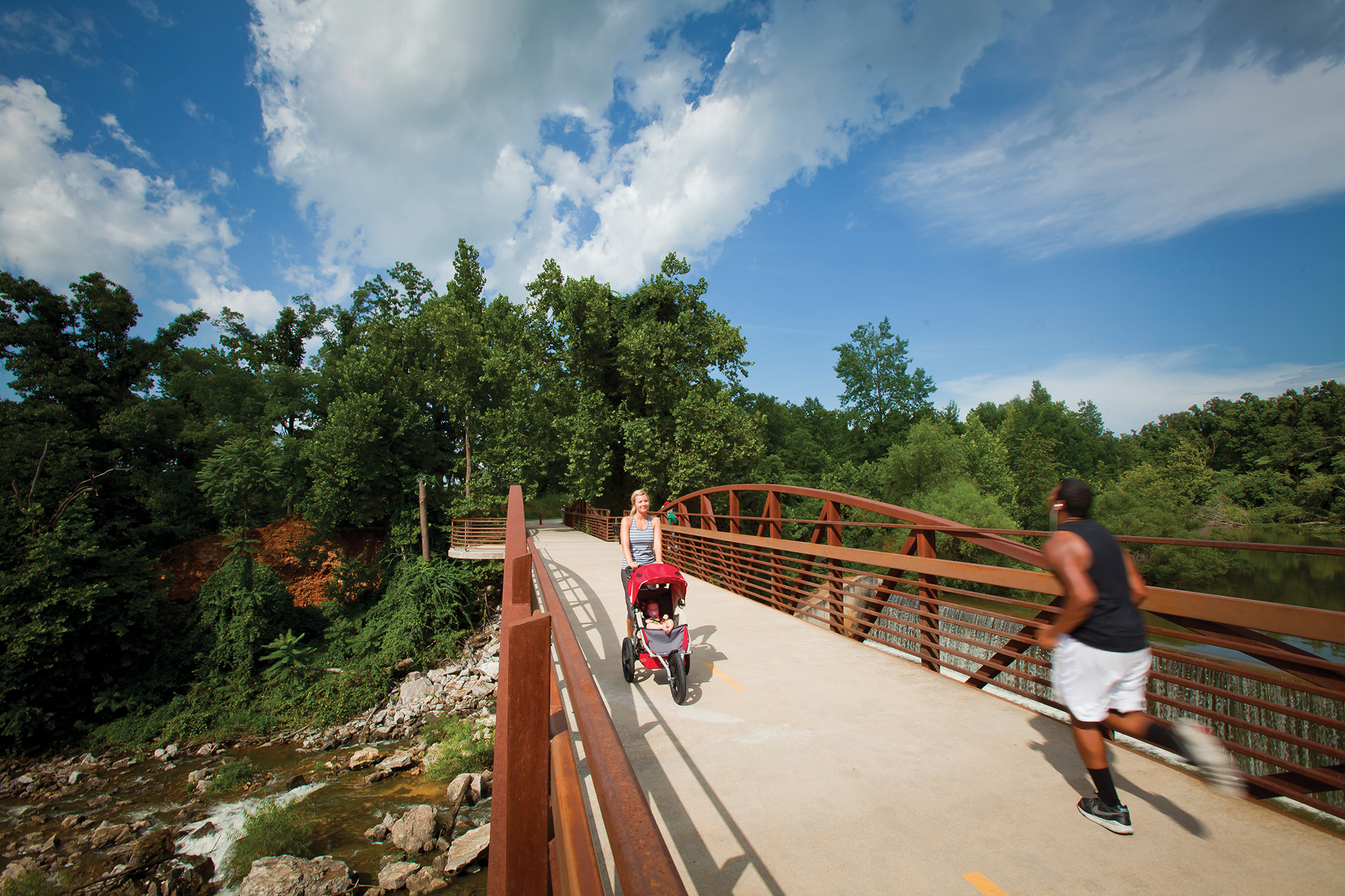 According to the Sierra Club’s 2012 fact sheet, “Pedaling to Prosperity,” between 2000 and 2010, the number of bicycle commuters in this country grew by 77 percent in communities that have been identified as “Bicycle Friendly” by the League of American Bicyclists. Bentonville and Fayetteville have received that designation, and all the towns along the RRG are seeing a visible upsurge of citizens taking to trails for transportation and exercise.

Misty Murphy serves as the regional trails coordinator for the Northwest Arkansas Council. She is pleased by the support coming from local communities.

“It’s all been incredibly positive,” Murphy said. “Fayetteville and Bentonville already had a lot of trail on the ground [as early adopters], and Springdale, Rogers and Johnson were quickly on board when they saw the other towns’ results.”

Although the RRG is open to the public, several projects are still in progress. Crews are busy installing trail signage and benches, and last fall, the Endeavor Foundation approved a grant that will cover the cost of installing water fountains approximately every 3 miles along the trail. The fountains will feature a pet bowl, a spigot for refilling water bottles and a traditional fountain spout. Many sections of the trail already have them in place, and the rest will be installed during the coming year.

Incomplete finishing touches, however, haven’t kept the RRG from becoming a topic of conversation among experts. “Every conference you attend in the country, they’re talking about the Greenway or our mountain bike trails in northwest Arkansas,” Murphy said. “Alta Planning+, the company that led the construction project, presented some of the most popular sessions of the week at the International Trail Symposium in May.” 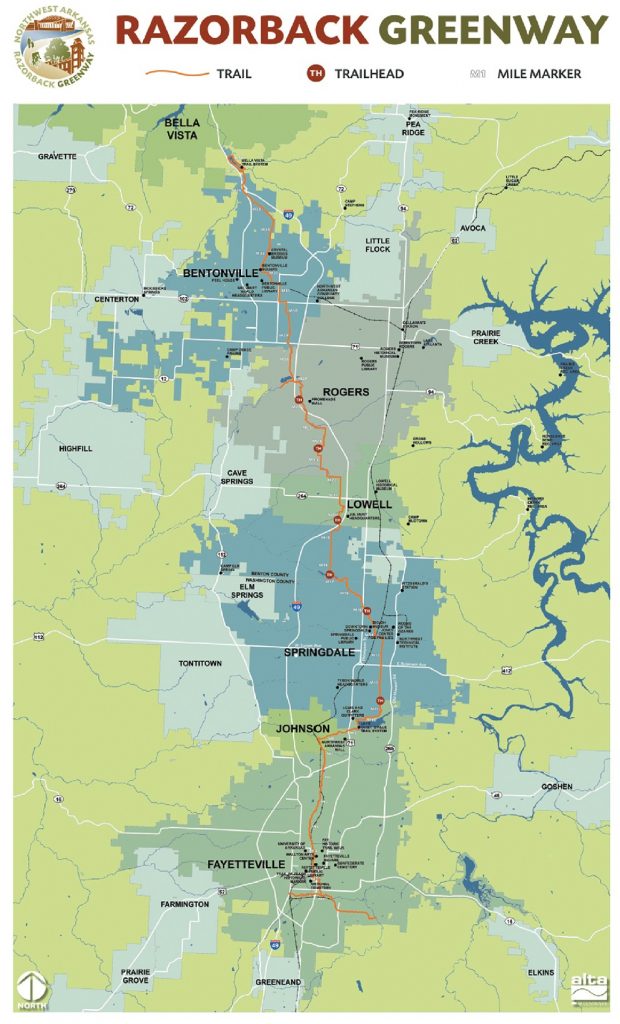 Seven towns are connected by the RRG: Bella Vista, Bentonville, Rogers and Lowell in Benton County, and Fayetteville, Johnson and Springdale in Washington County. Each community offers its own unique scenery and local points of interest for trail users.

The Frisco Trail portion of the RRG runs 2.3 miles through the up-and-coming real estate market of South Fayetteville, and within a block of the award-winning Fayetteville Public Library, before it crosses the bustling social scene of Dickson Street just off the University of Arkansas campus. The Community Creative Center and Walton Arts Center are located just a block off the trail, and used and independent bookshops, boutiques and a food truck hub provide additional reasons to linger.

As the trail follows the Arkansas-Missouri railroad heading north, the 4.3-mile Scull Creek Trail section loosely tracks Gregg Street, where you can stop for a picnic at Gordon Long Park before moving on to the retail shopping and dining mecca around Northwest Arkansas Mall.

From there, the 1.7-mile Clear Creek Trail turns east into Johnson, a tiny community sandwiched between Fayetteville and Springdale, before moving into one of the first sections of trail to be completed, the 2.2-mile Lake Fayetteville Trail. Here, you’ll find an opportunity to stop for a game of Frisbee golf at the lake, or to visit the Botanical Garden of the Ozarks.

Powell Street is a 2.1-mile straight shot north into Springdale, connecting with Spring Creek Trail, the last section of the RRG to be completed, though reportedly one of the loveliest to navigate. It crosses Emma Avenue, which is undergoing a bit of a renaissance at the moment. In addition to the Shiloh Museum of Ozark History and vintage and handmade retail options, the street will soon be home to the state’s first cidery when Black Apple Crossing opens its doors this summer. Core Brewing Company, a local craft brewery, is also planning a pub on the same block.

The trail follows Spring Creek under Business 71/Thompson Street, and around Lake Springdale, before heading north again on dedicated bike lanes on Silent Grove Road and Goad Springs Road, and through western Lowell. Pleasant Grove Trail heads back off the roads, and runs 2.8 miles to Mercy Trail in Rogers, providing access to Pinnacle Hills Promenade outdoor mall and a wide selection of dining and family entertainment options.

Horsebarn Trail follows Horsebarn Road for 1.4 miles before connecting with the South Bentonville Trail just north of Walton Boulevard. Bentonville’s trail system has been a crowning achievement in the community for many years, and the RRG takes full advantage of their early efforts. Users get a peek at the beautiful grounds full of native plantings surrounding Crystal Bridges Museum of American Art, running along Town Branch Creek, and meandering through the woods alongside the nationally recognized Slaughter Pen mountain bike trails. 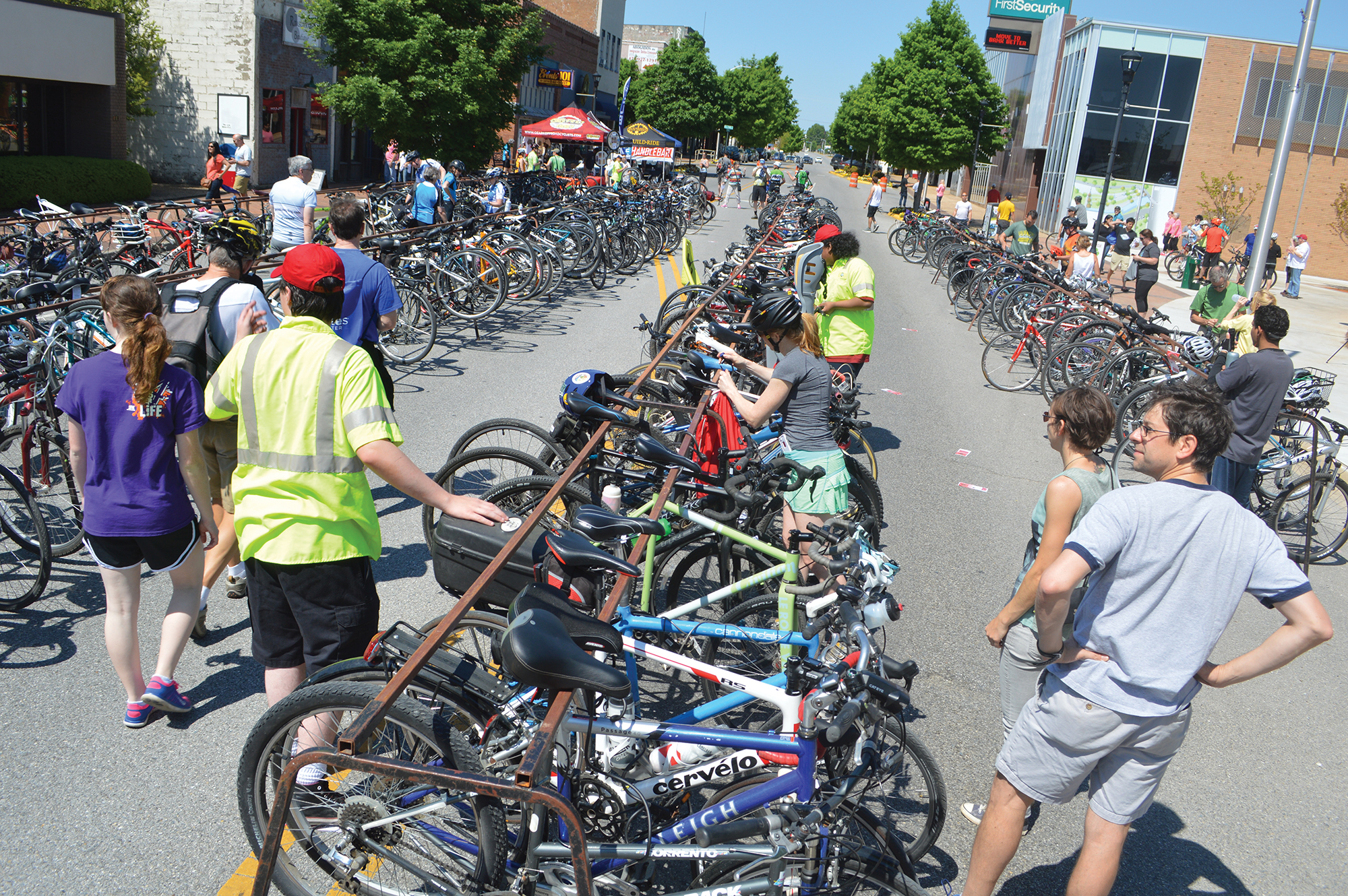 Downtown Springdale at the grand opening of the Razorback Regional Greenway

The final leg of the RRG consists of 1.6-mile Wishing Spring and .9-mile Bella Vista Lake trails. As with many of the natural features found along the Greenway, there are ancillary trails around the lake that provide additional riding and walking options.

For more information about the Razorback Regional Greenway, including some outstanding videos and an event calendar, log on to nwatrails.org. There, you can sign up to receive email updates and other information of interest to trail enthusiasts.