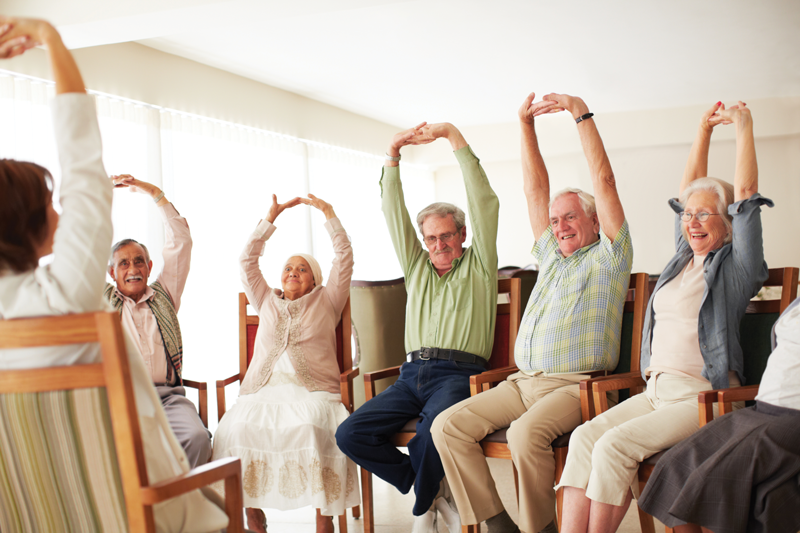 [dropcap]T[/dropcap]he dining room at Little Rock’s Brookdale Pleasant Hills senior living community is a bright, airy space with large windows and a cheery atmosphere. It is literally and figuratively the center of things here for residents; even in between meals a few seniors lounge in the afternoon sunlight or chat with a neighbor.

Most have an assistive technology of some kind, be it a wheelchair, walker, cane, hearing aid or some combination, but don’t let that fool you. The residents here, like those in senior living communities across the country, have clear cut ideas of how they want to live the latter chapters of their lives – independent and connected, in every sense of the word.

“I’m continuously amazed at how many [residents] want Wi-Fi. That’s very cool to me,” says Tina Bone, resident program director. “They’ll ask, ‘Do we have to have a landline, because we’ve just been using a cell phone at this point.’ Cable TV; my grandparents thought that there was one channel and that was it. These are guys that want ESPN and the Food Network.”

At any given time, 18,000 Arkansans call a residential care community home, according to Rachel Bunch, executive director of the Arkansas Health Care Assocation, an industry trade group. There are currently about 75 licensed assisted living communities in the state, representing nearly 6,700 beds. In addition, there are 225 skilled nursing facilities (the preferred name for nursing homes) offering just under 24,650 beds.

“There is at least one skilled nursing facility in every county except for one county in Arkansas where there’s one right over the county line,” Bunch says. “The way that it works for the beds and distribution is based on population. There’s a methodology that generates new beds in a county based on the number of people at the age of retirement. Areas of the state that have a higher population, there are more facilities.”

Some senior living communities provide a continuum of care, meaning they provide independent, assisted and skilled nursing all on one campus, while others are more targeted. The primary difference in independent and assisted living is the level of care – day to day life in assisted living includes help from medically credentialed staff, trained to a level commensurate with the degree of services required, while independent living is just that.

In Arkansas, Level 1 assisted living clients may only require help with bathing, toileting or other daily needs; Level 2 requires more involved services. General skilled nursing and specialty skilled nursing communities, such as memory centers, provide a much more involved level of care for their residents.

Unlike independent living communities, assisted living and skilled nursing centers must meet certain staffing requirements to maintain their licensure, both in head count and in training level of its employees. They’re also subject to a variety of inspections and other regulatory requirements to ensure residents are receiving proper care. Bunch said part of AHCA’s function is helping facilities meet and exceed these requirements.

“We just completed a big round of training with literally thousands of direct-care workers on how to better communicate with residents who have some sort of dementia,” she says. “That’s not necessarily a requirement, but it’s something that a lot of our facilities are interested in for training those staff to be better equipped.”

“Our facilities provide really high-quality service. The profession as a whole has made drastic improvements and changes over the last several years. We expect that trend to continue.”
Sheri Heslep, director at Robinson Nursing and Rehabilitation in North Little Rock agreed with that assessment, saying her long-term care facility is a far cry from the stereotype most people hold.

“I think that a lot of people assume that long term care is institutionalized, it’s inflexible, but it’s really not like that here,” she says. “We make accommodations to match, as closely as possible, what it was like for them in the community.”

Heslep said the facility accomplishes this by maintaining a flexible meal schedule, a range of activities and most importantly, hiring staff as much for compassion level as for their credentials.

“I want these people to know they can come to me. I want the families to know that I’m watching them just as well as if it was my own mother or my own father,” she says. “And when I say ‘me’ I’m also talking about my department heads. I mean all of us. What sets us apart, in my opinion, is that when a resident is admitted here they become our family. They honestly do.”

Even though the general population continues to age at an unprecedented pace (10,000 Baby Boomers a day turn 65 in America) the growth of long term care facilities in Arkansas has remained relatively steady. Among of the skilled nursing variety in particular, growth has been moderated by options such as home health care that have allowed seniors to stay in their home longer.

However, specialty care such as memory centers are poised to become a potentially notable exception to that trend, as a larger number of seniors deal with dementia issues. Family members in this situation discover how quickly such conditions outpace their ability to meet their loved one’s needs and they start looking for help.

“With memory care, routine is very important,” she says. “We can’t change everything about what’s happening; they’re living with a disease that’s taken so much from them. But we try to continue what they were doing at home, which is very important.”

Examples of this individualized care include varying breakfast times to accommodate residents who prefer to sleep in and guiding them through exercise programs or craft sessions that stimulate both mind and body. Equally important, Spears said, are the quiet moments where staff make themselves available simply for a conversation.

“We try to keep a structure for the resident, but not every resident’s the same,” Spears says. “We just work with each resident individually.”

Despite the excellent care many long-term care communities in Arkansas offer, seniors often put off talking about moving to a community, much less tour one, until an incident such as forgetting medication or a fall at home forces family members’ hands.

“What we do is let momma know that it’s not what you saw 35 years ago, that technology and evolution of the senior health care system has developed into something like Pleasant Hills where it’s very, very independent, yet providing supportive services that help you along the way.”