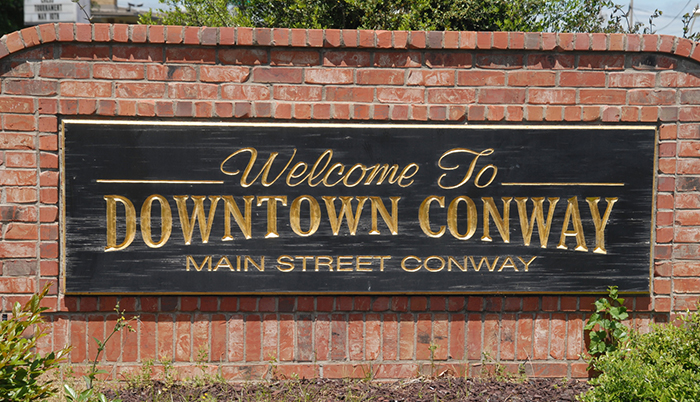 The City of Conway has often been referred to as the Little Rock of Faulkner County, and the revitalization and development of the City of Colleges have added value to the comparison.

Over the course of the year, Conway has seen remarkable expansions and developments, especially in the downtown area. Kim Williams, executive director of the Conway Downtown Partnership, highlights the successes that Conway has seen, even in the midst of a pandemic. 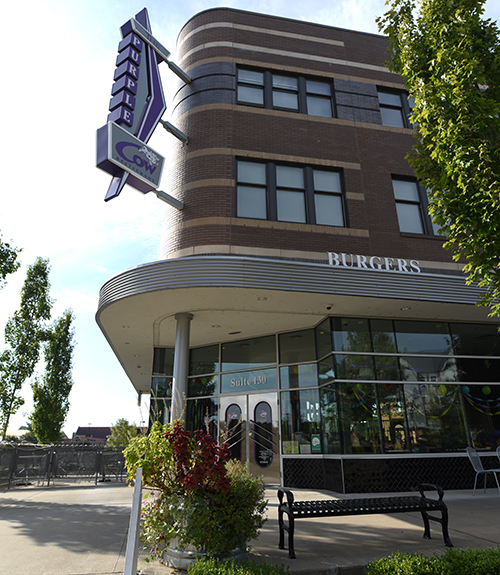 Opened in early November, Myers Mercantile has moved to a new location and has renovated the inside of its new building. Myers Mercantile features antiques, vintage, outstanding local artisans, gifts and other home goods in the historic downtown district of Conway. Kindred Mercantile, a former online retailer, has opened a boutique in Conway as well. The Flying Pig has also recently opened a store in Conway. Originating in Wisconsin, the Flying Pig sells gourmet popcorn and other treats. Buff City Soaps has also recently opened in Conway, selling 100 percent plant-based soaps and body products.

In terms of festivals and city-wide events, Conway has faced the task of balancing safety regulations with successful turnouts. 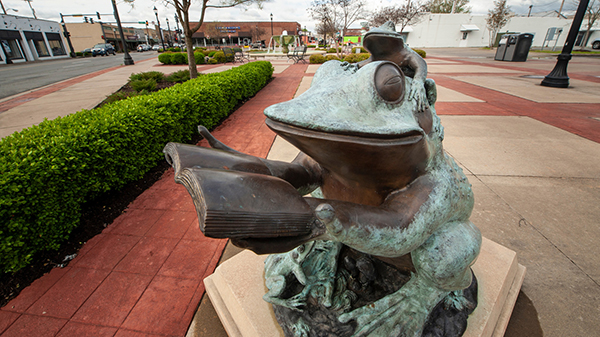 “We’ve been having bigger events, tapered throughout the year,” Williams says. “We also spread events out over the course of the weekend instead of a high crowd density during one day. While this year’s events haven’t been quite as packed, we’ve still had a really good turnout.”

Adena White, the director of communications of the Conway Area Chamber of Commerce, emphasizes that it’s very encouraging for the merchants of Conway to see that people are still braving uncertain times to go out and shop locally.

“To know that customers are still shopping locally and helping out merchants at home has been reassuring for Conway businesses,” she says.

“We’ve seen a lot of activity,” Williams adds. “Early on in March and April, I didn’t think that we would be having this conversation with COVID going on, and we didn’t know what to expect. For many retailers, this is the best year that they’ve ever had, because COVID has forced them to be 10 years further down the road than they had planned to be, in terms of establishing online sites.” 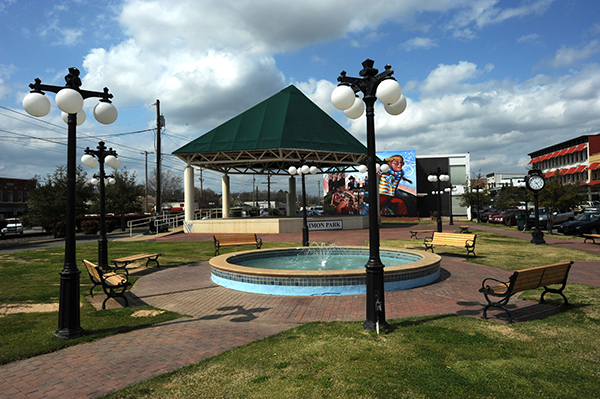 White dubs the adjustment in Conway as a “true online economic revitalization.”

“A lot of people have moved their merchandise, displaying things in the windows. You call the store owners and tell them what you want — it’s a real kind of window shopping,” White says.

Many merchants in Conway, such as The Kitchen Store and More, have turned to online retail markets to stay afloat during quarantines and social distancing. 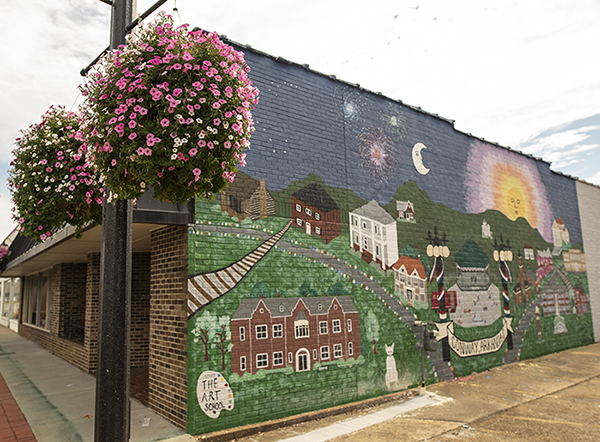 “Many people have become Facebook Live salespeople,” Williams says. “Many merchants have come up with unique virtual promotion ideas, like ‘Lunchtime Live,’ after work sales, and using all of their social media platforms to keep them relevant and to keep them going. Many people have outdoor areas, quick fixes, customer number limitations.”

White adds that another reason businesses have been succeeding is the dedication and flexibility of employees.

“Many businesses have employees who have worked incredibly hard with their employers for their communities,” she says. 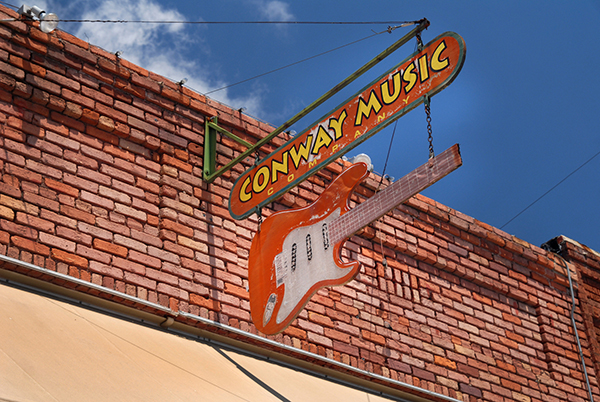 In addition to new businesses and merchants in the city, Williams notes with pride that Conway has seen a lot of positive construction and renewal.

“The other big development in the works is the Markham Street Corridor. Markham Street in downtown Conway connects the historic area and downtown,” she says. “This was the main market area and was a pivotal location for historically Black neighbors on that side of town. This is a revival of that street — it’s lost some of its historic connection because of urban sprawl.”

Now, this part of downtown Conway has expanded an innovative sidewalk system that is friendly to cyclists of all kinds and is one of the first of these systems in Arkansas.

“All of this was made possible thanks to a grant from Metroplan,” Williams says. Metroplan acts as the regional voice on transportation and development issues affecting Central Arkansas. “There was a great deal of work that had to be done behind the scenes by organizations such as Conway Corporation. Conway is also working on receiving more grants to work on flooding and water concerns in the city.”

White shares that Markham Square is being renamed to Martin Luther King Jr. Square, and that the name change will be accompanied by the addition of an outdoor performance space, a family space, art murals and concepts, and an environmentally friendly rainwater capture and filtration system. 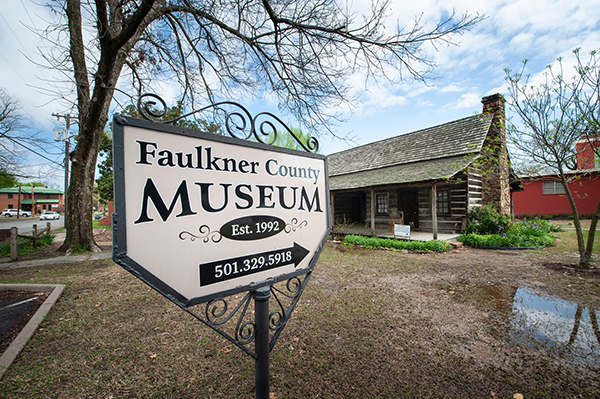 “Many of the public art murals and projects planned throughout Conway are thanks to OZ Art, along with the Walton Family Foundation. OZ Art is responsible for huge public art projects with renowned artists across the country,” White says. “They did a big project at the former Conway Block Plant, and a lot of their work with us has been animal based.”

Williams tells Arkansans visiting downtown Conway to be on the lookout for a large “whimsical toad” to include in a selfie. “Conway received an Arkansas Historic Preservation Program grant to add tiny toads across the downtown area with facts about the region that they’re found in.”

Not surprisingly, White also says that visitors to Conway can expect to see more roundabouts in the coming year.

Outside of the downtown area, White and Williams mention that general landscaping and beautification projects will take place all across Conway, and in areas that haven’t received attention in a while. The City of Conway is also installing multicolored bulbs in the light posts around multiple roundabouts that are dazzling when the sun goes down. This latest feature is part of a plan to install roundabout art throughout the city.

White and Williams also shed some light on what Christmas will look like in Conway this year.

The Christmas tree was lit on Nov. 28, though without the usual ceremony that residents have become accustomed to. 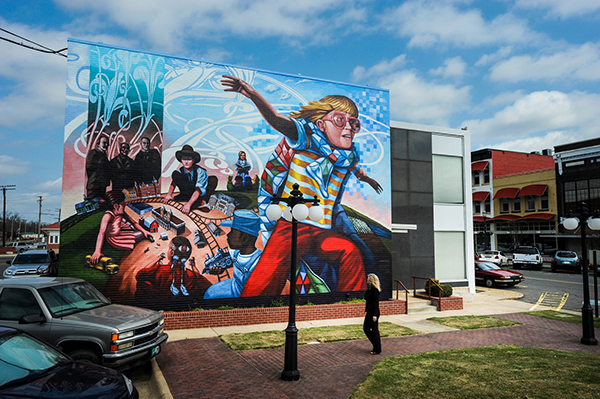 The 2020 Chick-fil-A and Baptist Health Conway Illuminate event will not kick off a month full of Ferris wheel or carriage rides. Instead, the city of Conway will introduce its Advent calendar on a smaller scale, with many of the city’s sponsors and businesses receiving one. These Advent calendars will have different call to actions on how to celebrate Christmas in Conway, suggesting that Arkansans support a nonprofit or leave their mail carrier a gift.

The annual Mistletoe Madness event will not include a Christmas parade, but Conway’s officials are still encouraging people to come out and enjoy downtown.

“We’re reminding people that although things are different this year, we still need to support our neighbors and our city, and shop loyal by shopping local,” White says. “There is still plenty for the family to do, we’ll just have to do it this year by social distancing.”

“We encourage families to come out and take pictures, as we’ll still be having our photo contest with Sissy’s Log Cabin,” White adds. That photo contest will include the hashtag #SissysFamilyChristmas.

“We’ll still make a big deal out of Christmas, it just won’t be in front of our tree this year,” Williams says.

Both White and Williams add that Santa will still be around — he’ll simply be socially distancing.

A televised event supplanted the usual in-person Christmas tree lighting on Nov. 28, which aired on Conway Corporation Channel 5. For those outside of the city or others who might have missed it, KTHV-Channel 11 is airing this “Conway Christmas” special on Monday, Nov. 30, at 7:30 p.m. In addition to the stapled tree lighting, the special will also feature music from the Conway Symphony Orchestra and a reading from The Christmas Story.

You can find all of Conway’s planned Christmas activities on the city website’s calendar.

READ MORE: Conway Has It All

Photos courtesy of the Arkansas Department of Parks, Heritage and Tourism.