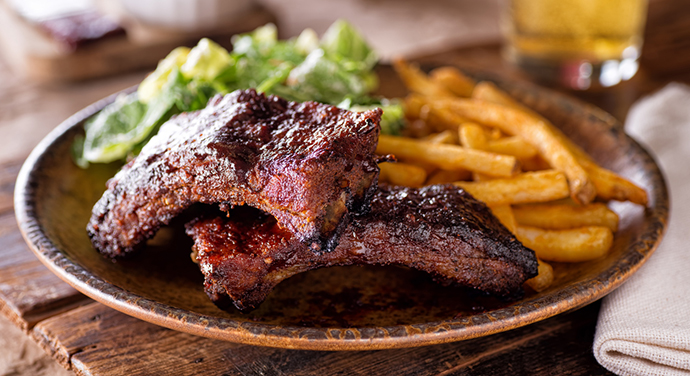 Sometimes you just have a hankering for barbecue.  But you don’t want pulled pork or ribs.  So you drive to Corky’s BBQ and Ribs and belly up to the bar because you’re in a hurry, and exclaim, “Help.  I have to have a loaded baked potato with cheese dip and pulled pork and dry rub.”  Because ya know what? They’ll bring it out to you, and they’ll be quick about it.  Sure, you can drive through or you can dine in, but the quickest route for the food to get to your stomach is to sit at the bar and order it.

A delicious loaded baked potato at Corky’s BBQ and Ribs!

Take it from someone who knows.
And if you’re wondering when the barbecue from Corky’s first landed in the state, it was in the 1990s.  Former Razorback center, NBA journeyman and Olympic athlete Joe Kleine opened Corky’s with his friend, Tommy Hilburn, and another partner.  The other partner sold his share and now the Kleines and Hilburns can be seen in the restaurant whipping up your meal.  From the smoked turkey salad to Buffalo chicken wrap, you can find something for every hungry palate.
With locations in Little Rock and North Little Rock, there’s plenty of BBQ to go around. The restaurant is open from 11 a.m. to 9 p.m. on Sunday through Thursday and from 11 a.m. to 9:30 p.m. on Fridays and Saturdays.
What are you waiting for? Go get some delicious BBQ!
RELATED: Two North Little Rock Restaurants Offer Meal Deals