Cosmetology Students to be Trained in Domestic Abuse Awareness 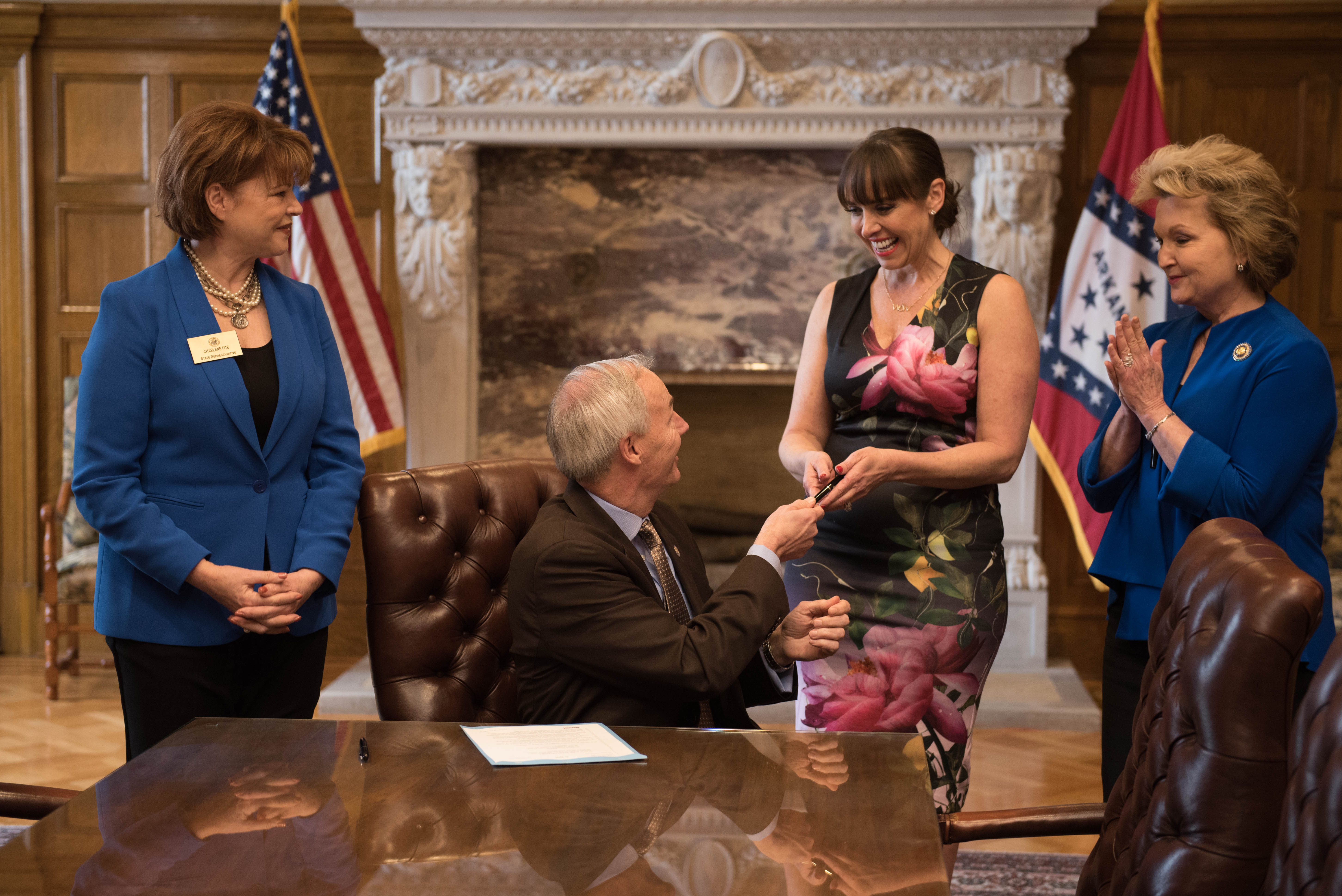 This past November, I had the opportunity to interview Jajuan Archer, owner and founder of Women’s Own Worth, a foundation that offers individualized services for the victims of domestic violence, and violent crimes. Her story can be found in the online article, “Turning Tragedy into Purpose”.

In January, Archer learned of a law passed in Illinois requiring salon professionals to receive training in domestic abuse-prevention. Archer was convinced that Arkansas needed the bill, and approached representative Charlene Fite.

Archer describes how this program can provide unique help to victims of domestic abuse, with face-to-face interaction. On March 11th, I joined her at the Capitol for the signing of the bill, which she was joyfully surprised to see pass so quickly.

First Lady Hutchinson played a significant role in the passing of the bill. She was determined to get the bill passed when she read an article in the paper regarding the Illinois law. Ironically, Archer had seen the same article in the newspaper, clipped it, and sent it over to Fite to see the bill. Fite pushed it through the legislature and got it signed. The governor had not been briefed on it until it was time to sign, and his legal team, Vu Ritchie, spoke up and said, “Well, this is something that the First Lady is interested in.”

The First Lady talked about how appreciative she was of the combined effort of good getting done in Arkansas. House Bill 1720, passed in on March 16, 2017 requires cosmetology students to have training in domestic violence and sexual assault awareness; and for other purposes.

I thought to myself, how brilliant? The cosmetology students who will receive this training will eventually end up in salons. Think about the amount of people from all walks of life, who are in salons day in and day out, up close and personal with their stylists. They talk to these people. Even if they don’t open up, the stylist is in a position to observe—and combined with the education that they will receive, will hopefully make a difference.

First Lady Hutchinson said domestic abuse “is on people’s radar, it’s something we’re talking about and recognizing that it’s problematic throughout our society—high, low, in the middle, rich, poor. It’s just all over the place, and in significant numbers. But there are things we can do about it, and that’s the wonderful part, that people are able to talk about unsettling things when they know that there’s a solution. Otherwise, you’re apathetic and feel like you can’t extend that type of emotion. But now, we’re talking about it, and talking about the solution.”

Hutchinson and I go on to discuss the importance of awareness, to which she adds, “Awareness and the solution are important, and the positive step that we can take. Putting action to our prayers. Women, children and men can get so beat down with the manipulation and the struggle of living with an abuser, that they don’t see a way out.”

I recalled my meeting with Archer earlier in November and told Hutchinson of how we discussed the physical and sexual abuse, but that there is a level of psychological abuse as well, that is just as detrimental.

Hutchinson responds in imitation, “Oh yes… ‘Nobody else will love you…there’s no place for you to go…you’re not worth anything…I’m the only person that cares about you.’”

Nodding my head, I add, “The Bottom line is that it’s all abuse—and it needs to be recognized and addressed. Jajuan was telling me that there are approximately 3,500 cosmetology students right now in the state of Arkansas. When you think about it, that is a huge chunk of people that are going to have this awareness, this information and this influence.”

Hutchinson talks about how she wants to see the different cosmetology shops to go ahead and implement the program. “Go ahead and just volunteer to have that information there. Hopefully there will be some good follow up, to broaden the scope of it.”

All involved are in agreement that the community coming together to serve a good cause is one of the best things about this bill. More good things are certain to come, as Arkansas moves toward the desire for a greater good.